The title Goodbye Christopher Robin initially evokes the assumption of a film unfolding the origins of Winnie the Pooh and friends in your average cuddly and wholesome tale of love and inspiration. However, Simon Curtis offers anything but in his British family drama.

Domhnall Gleeson stars in the lead role of A.A. Milne, whom many of us know as the author of the universally-loved Winnie the Pooh books. We first see Milne – nicknamed Blue – in his East Sussex country home, alongside his wife Daphne, portrayed by the ever-eloquent Margot Robbie. The couple receive a telegram that causes immediate distress and Blue is reminded of the terror of a life in the WWI trenches.

Back in 1918, succumbing to shell shock – a form of PTSD not known or ever discussed at the time – Blue initiates a relocation to the countryside in an attempt to write an anti-war novel, leaving behind the robust cargos of London, despite his wife’s hesitation. However, writer’s block sets in and the couple soon welcome a son, much to Daphne’s disappointment, who had long-hoped for a girl. Neither parent bond with their child, named Christopher – with Blue at one point picking up his newborn son as if he were a hand grenade – and the couple soon head for a month-long trip to Italy and hire a full-time nanny, played by the enchanting Kelly MacDonald.

As time goes by, Christopher Robin – whom his family refer to as Billy Moon (portrayed by Will Tilston in his first role) – develops a strong relationship with his nanny, Olive, who proves to be the only stable figure in his life, as he struggles to obtain an ounce of closeness to his parents. However, involuntary afternoon strolls allow Blue to develop an initial idea for a children’s story, after seeing his son playing with his stuffed teddies – Winnie, Piglet, Tigger and Eeyore, et al. And thus, the chronicles of Winnie the Pooh begin, and the world for Billy Moon is turned upside down.

One powerful scene sees Blue and his son enjoying a walk in the woods as a way of research. “Are we writing a book?” asks Billy? “I thought we were just having fun.” And although the film enlightens you with the facts and the origins surrounding these iconic literary characters, the subtext subliminally informs you of the overwhelming price of fame. And while his parents indulge in this elaborate lifestyle of money and celebrity, Billy feels the burden most of all, as he’s pushed into the limelight and, at one point, is even forced to take a photograph with a real-life grizzly bear.

Gleeson and Tilston attain genuine chemistry, one that makes you truly believe you are seeing a complicated father and son relationship unfold onscreen. There’s a sincerity to Tilston’s performance that, while at times is somewhat forced, makes you believe that this little boy really wants to help his father. However, it is the later years, when Billy is 18 (played by The Imitation Game’s Alex Lawther, who is destined for a long acting career) that are hardest to watch. While Gleeson is as gracious and diverse as ever, it is Robbie who gets the short end of the stick as the extremely cold and, at times, forbidding Daphne. Nevertheless, it is evident in her performance that Robbie does not apologise for her character’s flaws and is opportunistic in her portrayal of a complicated mother.

Goodbye Christopher Robin initially presents itself as your typical run-of-the-mill British literature biopic – trudging into Mrs. Potter (2006) and Finding Neverland (2004) territory. However, about 40 minutes in you realise it is feeling less Mrs. Potter and more Saving Mr. Banks (2013). It turns out the traumatic effects of post-war life coincided with a somewhat stolen childhood makes for a fairly morbid family movie. However, it is these darker themes that also make for a much more relatable and evocative story.

Goodbye Christopher Robin is available on All 4 until 27th September 2020.

Where can I buy or rent Goodbye Christopher Robin online in the UK?

Trailer: Chris Rock and Adam Sandler go head-to-head in Netflix’s The Week Of 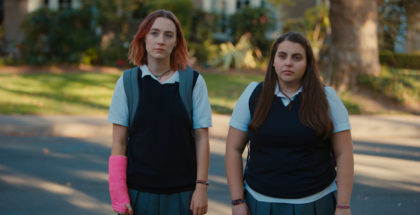