VOD film review: Dating Amber | Where to watch online in UK | How to stream legally | When it is available on digital | VODzilla.co 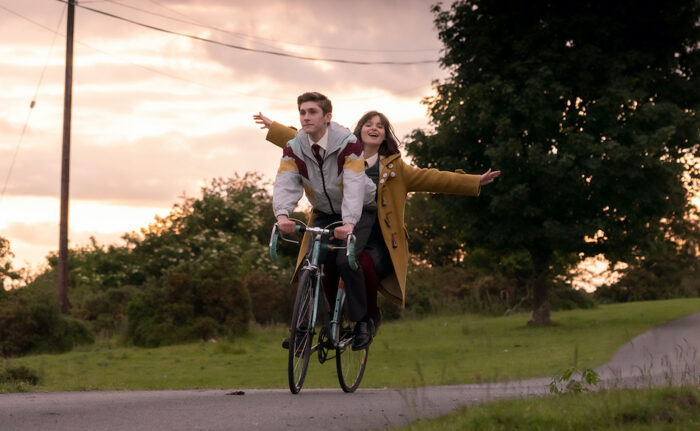 This warm, funny and moving coming-of-age comedy is an absolute delight.

Boy meets girl. Boy and girl decide to become a couple. Complications ensue. What sounds like a generic romance is the gateway to a gorgeously heartfelt and warmly funny coming-of-age story in Dating Amber.

Fionn O’Shea plays Eddie, an awkward teen who is training to go into the army. But a crush on his male teacher leads him to question his sexuality – and, the more he suspects he’s gay, the more he worries that he won’t fit in. Lola Petticrew plays Amber, who dreams of moving to the liberal Mecca that is London, where she can start an anarchic bookshop. When the duo cross paths, they realise that they could be the perfect match to cover each other’s secrets – mutual beards to stop them being bullied and questioned by pupils and, worse, their families.

Set in Ireland during the 90s, the script is somewhere between Derry Girls and Easy A, and part of the joy is seeing just how well rounded this world of rural uncertainty is. Writer-director David Freyne juggled social tensions with zombie allegory in the excellent horror The Cured and he has a similar knack of storytelling and character building here. What could be a poignant story is played funny and gentle, with an amusingly bad sex education video signposting the tone early on.

But there’s rich depth to match the heartwarming sweetness, with a strong supporting cast that includes Sharon Horgan and Barry Ward as Eddie’s military-minded dad. And, to cap it off, there’s a beautifully observed juxtaposition of Eddie and Amber’s arcs, as what could have been a conveniently tidy premise becomes believably messy – while Amber becomes more confident in herself, Eddie becomes more withdrawn and anxious, an evolving dynamic that dovetails superbly with a climactic trip to Dublin. The result is a moving teen rom-com that keeps things refreshingly platonic, while balancing insight and laughs with a delicate, bright and breezy touch. A love letter to Ireland, growing pains and learning to love yourself, it’s an absolute delight.

Dating Amber is available to watch online on Amazon Prime Video as part of a Prime membership or a £5.99 monthly subscription.