MUBI UK film review: Computer Chess | VODzilla.co | Where to watch online in UK | How to stream

Who are we? What’s it all about? And can anyone find the ice machine? These are just a few of the questions hot-wired into lo-fi baffle ballad Computer Chess, the latest opus from mumblecore specialist Andrew Bujalski. He’s the genius behind Funny Ha Ha and Mutual Appreciation – smart, rather gawky little films that feel coarse and ungainly on a first pass, but later reveal subtle truths in the grain of his beloved 16mm. Bujalski’s oeuvre is niche and unforgiving, for sure, but witty and humanistic enough, if you’re willing to take the plunge.

True to form, Computer Chess is an eccentric piece of work that seems destined to be loved only by the righteous few. ‘Cult’ doesn’t even begin to describe it. And quite right too. Shooting this time on uncouth black-and-white video stock, Bujalski has constructed a delightful and fitfully obscure tribute to social awkwardness. Frequently hilarious, occasionally profound and sometimes just plain old crazy in the coconut, it’s an idiosyncratic miracle in 4:3.

Set in some nightmarish vision of the 1980s (or, as we like to call it, the 1980s) the film documents the escapades of rival programmers as they compete in their hotly-anticipated annual chess tournament. The purpose? To build a computer that could realistically take on a human Grandmaster… and win. Over the course of one confusing weekend, this band of nerdy brothers indulge in philosophical debates and psychoactive drugs, take tentative steps into the wonderful world of sex, and play a hell of a lot of chess. One of them, the wonderfully monikered and perpetually confused Michael Papageorge, even gets stuck in a time loop. Meanwhile, there’s a guru taking over the function room downstairs – no one really knows what to do about that.

The film’s inimitable aesthetic – think retro TV doc channelled through Eraserhead, with every scene kitted out with the most terrifyingly authentic tech – is almost oppressive. Bujalski’s camera stalks hushed, plush hotel corridors, going around in circles. The director wins full marks, too, for an incredible final shot, one of the most unforgettable and head-spinning of 2013.

It’s beguiling stuff. Bujalski reminds us that some the greatest accomplishments in the history humankind are achieved basically by the nerdiest, most socially inept people you’ll ever meet. His protagonists – clammy, ambitious, obnoxious young males in cheap ties and prescription glasses – cluster together in packs, and hardly ever with members of the opposite sex (at least, not the ones they find attractive, which is to say, hardly any of them). Sex? It’s a puzzle. Personal affection? A mystery. Computer love is the closest they come to meaningful relationships.

And yet… they are titans. Boundless adventurers on a journey of scientific discovery. They inhabit hotel and conference complexes like troglodytic heroes. Human after all? Not a chance. These guys are gods. Or at least, that’s what they think.

Computer Chess is now available on MUBI UK, as part of a £9.99 monthly subscription.

Where can I buy or rent Computer Chess online in the UK?

VOD film review: The Boys Are Back 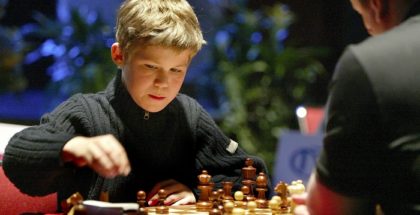