VOD film review: Blade Runner 2049 | Where to watch online in UK | How to stream legally | When it is available on digital | VODzilla.co 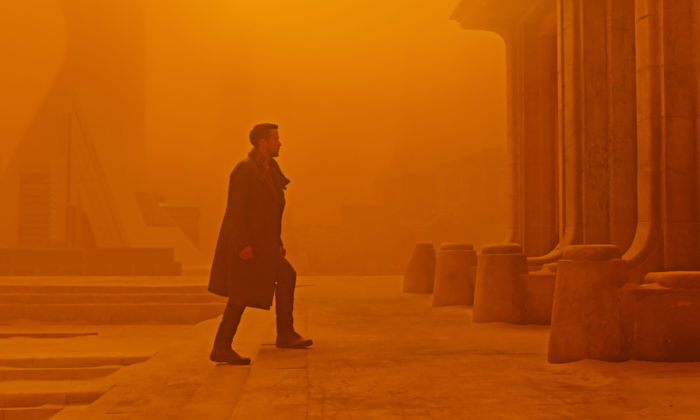 Denis Villeneuve's remarkable sci-fi sequel is a profound evolution of the timeless original.

Warning: This contains spoilers for the original Blade Runner.

Is he or isn’t he? That was the question left hanging in the air 35 years ago by Blade Runner, Ridley Scott’s masterful sci-fi, after we saw titular android hunter Deckard (Ford) track down replicants and “retire” them with his gun, only to fall in love with one of them, Rachael (Sean Young). If he was human, he’d learned to become dispassionate and detached from killing and slavery – less human than the labouring machines he was chasing, who, in turn, had learned empathy for each other and even him. If he was a bot, he was programmed by humans to kill his own kind. Does that mean he was programmed to fall in love too?

Neither answer makes for a cheerful ending, and it’s in that downbeat, challenging ambiguity that Ridley Scott’s classic (set in 2019) finds its timeless brilliance. That Blade Runner 2049 manages to live up to the reputation and complexity of the original is impressive. That it endeavours to keep that central question unanswered is nothing short of remarkable.

The script, penned by Michael Green and Hampton Fancher (co-writer of the first film), does a brilliant job of updating the themes and preoccupations of its predecessor, while Denis Villeneuve (who, between this and Arrival, has crafted two of modern cinema’s great sci-fis) was seemingly born to shape those words into something both faithful and distinctive; his futuristic LA feels like a digital echo of the original’s tangible dystopia, as pixellated ripples of 2019’s physically deteriorating world spread through 2049’s dimly polluted, neon-lit sky.

In that city lives K (Ryan Gosling), a modern Blade Runner who is, without question, a replicant – part of a new, advanced line of androids designed to be more obedient. Gosling is perfectly cast as the determined officer, his calm, almost blank, expression hinting at the emotions gradually forming beneath. We first meet him as he goes to a protein farm to retire its owner, a renegade replicant on the run (Dave Bautista). Within minutes, bodies have been thrown through walls and guns have been fired, but this sequel is more slow art movie than action-packed spectacle, and Gosling’s still presence is at its centre.

K quietly, methodically investigates a strange discovery on that farm, which leads to a case involving a missing child. But the internal impact of that mystery is the real driver of the story, as it sparks K’s own childhood recollections. Memories, Blade Runner posited, are part of what makes humans human, leading the Tyrell Corporation to implant false ones in their mechanical creations. Now, even though we know K’s are manufactured, the question remains about how much they’re based in truth, and how much, in turn, that defines K’s identity.

The script wears its electric sheep on its sleeve, as talk of miracles gives way to belief in a soul – not necessarily something assembled from memories, but something belonging to any creature that’s been born. With the Tyrell Corp now bankrupt, though, and taken over by megalomaniacal engineer Niander Wallace (Jared Leto), the line between building and spawning is becoming blurred, as he pushes the boundaries of science to find a cheap way of producing an efficient workforce – a corporate act that he undertakes with the righteousness of a self-imposed god and the perfectionism of a hipster artist.

There’s a wonderfully creepy streak to Leto’s surprisingly understated performance (part biological, part mechanical), which nails the eeriness of a world that’s advanced from 30 years ago, yet remains stuck at exactly the same point. There’s progress, but also decay, from the warehouses we glimpse full of children assembling computer parts to the dust-ridden, abandoned buildings on the town’s outer limits, monolithic structures rising ambivalently out of the soil like a toxic mausoleum. There’s advancement in the way the adverts on the street have become gigantic holograms that leap out of buildings, yet women have never felt so objectified: K’s only notable relationship is with a holographic AI called Joi, who is literally the projection of an ideal woman (complete with 1950s housewife option) and can’t operate outside of her owner’s reach.

It’s a relationship played with unexpected tenderness by Gosling and Ana de Armas, with Joi coming across as part Samantha from Her and part Siri. It’s hard to know what’s more disturbing: that this bond between artificial beings is the warmest thing we see, or that their chemistry is ironically, deliberately rooted in uncanny, unfair exploitation. She’s a companion who reinforces the loneliness of this modern era, where replicants are still considered below humans and people mostly live in isolation. The brief introduction of a real companion (Halt and Catch Fire’s Mackenzie Davis) only highlights how unnatural and artificial actual relationships in this twisted future have become.

And yet there’s a burgeoning self-awareness that lingers in Joi’s scenes, and in her occasional act of selflessness. K’s own existential enigma, meanwhile, is contrasted by Robin Wright’s Lieutenant Joshi, a stern boss who behaves more like a replicant than a person. When he questions hunting down a child, something born with a soul, she shrugs: “You’ve been doing fine without one.”

That dismissive assumption of authority, which lingered in the background of Ridley’s noir-tinged original, is confronted head-on here, as generations pass down the same cruelty but its younger recipients prove less willing to accept it. The sense of a conflict that’s been boiling for several decades is baked into Villeneuve’s worn-down world-building, which extends the unequal basis of Ridley and Philip K Dick’s bleak society with unfaltering, provocative logic.

Roger Deakins’ jaw-dropping compositions play a key part in that balance of the brand new and the crumbling: the inner city is rain-strewn blue with bursts of bright pink ads, while the deserted outskirts give way to an orange-drenched wilderness that scorches the camera lens. But nowhere is it summed up better than by Harrison Ford, whose much-hyped appearance as a grizzled Deckard doesn’t disappoint. The movie’s best scenes see Gosling and Ford go toe to toe, surrounded by actual ghosts of the past in a strange, virtual nightclub. Ford delivers perhaps the best work of his career, delivering a mature reflection on loss and ageing.

His downbeat turn is Blade Runner 2049’s strongest asset, refusing to buy into the surface sheen of new technology; it’s a doggedly human performance, and he fiercely clings to his memories, regardless of whether they’re real or he’s coded to think they are. K, clutching a wooden horse in place of Deckard’s paper unicorn, spends the movie’s epic runtime searching for a distinction between those two possibilities, but like Star Wars’ The Last Jedi, this sci-fi sequel’s complex attitude towards history spends as much time sidestepping legacy as it does embracing hope. What emerges isn’t a blockbuster tale of conspiracies, chosen ones and explosive set pieces, but a gentle, thoughtful evolution of Blade Runner’s philosophy, creating a profound piece of cinema that’s every bit as timeless as the original. Where that found common ground in mankind and machine’s race to overcome mortality, Blade Runner 2049 finds humanity in learning to put something else before yourself. Is he or isn’t he? Villeneuve poetically avoids ruining the unanswered mystery of the original. To do or not to do, that’s the real question.

Why you should catch up with Marcella