Netflix UK film review: Best of Enemies | VODzilla.co | Where to watch online in UK | How to stream

An insightful study of politics and the media wrapped up in an entertaining bout of name-calling.

“Are you alright, Ed?” That harmless question became the sound bite of the 2015 UK general election, after Jeremy Paxman drilled Labour candidate Ed Miliband for 30 minutes with increasingly personal questions. It was a rare brazen dig in an otherwise stale televised campaign, as incumbent Prime Minister David Cameron refused to debate with the opposition leader head to head.

In America, though, confrontation is the name of the game – political punditry is an opportunity for a good old scrap. And audiences, like schoolkids, like nothing more than gathering round a brawl in the playground. It’s a trend that first started in 1968, when the flagging broadcaster ABC came up with a drastic way to boost ratings: a string of one-on-one debates between Gore Vidal and William F. Buckley Jr. alongside the Republican Convention in Miami and the Democrat Convention in Chicago.

They were polar opposites – Vidal, a liberal; Buckley, a conservative – but also had much in common: neither were in touch with the common man and both were members of an elite that thrived on long-winded arguments. Best of Enemies dives right into the fray that ensued.

It’s a niche topic for a documentary (it lacks the heft of the more mainstream Frost/Nixon), but directors Robert Gordon and Morgan Neville piece together the archive reels with all the hype and drama of a boxing match. Neville, who helmed last year’s Oscar winning doc, Twenty Feet from Stardom, has a nose for going behind showbiz scenes; Best of Enemies charts the descent of these two verbose individuals from elevated speech into childish insultsm, ranging from “queer” to “crypto-Nazi”.

Readings of the duo’s later accounts of the event – by Kelsey Grammer and John Lithgow – distract from the fun of the raw footage, but also introduce a number of layers to their subjects: as the couple’s intellectual sheen wears off, the IQ of political TV coverage also dropped, something that turns this into an insightful examination of media and politics, as well as an amusing anecdote of stubborn egos colliding. (It would also make a good double-bill with Gore Vidal: The United States of Amnesia, which is on Netflix UK.)

The divergent path of each contender following the debates – Buckley became something of a king-maker in the Reagan era – is cut with their ongoing feud, which extended to a long-fought court case. As a result, any sense of victory is lost amid the petty mud-slinging. You may well be left feeling the same way about the current American (or UK) political system and the way it’s presented. Either way, you’ll be up for a shouting match.

Best of Enemies is available on Netflix UK, as part of an £8.99 monthly subscription.

Where can I buy or rent Best of Enemies online in the UK? 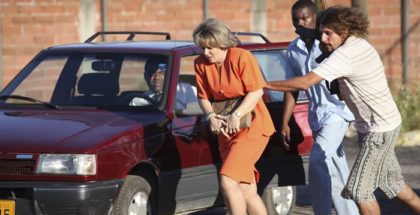