VOD film review: Beast | Where to watch online in UK | How to stream legally | When it is available on digital | VODzilla.co

“A love to die for!” is the kind of the tag line you can imagine being on the poster for this gothic romance, were it released decades ago. Beast is a swooning, sinister psychosexual thriller rooted in warped fairytales of old – but this British indie, powered by two barnstorming performances, feels as fresh as cut grass.

The film follows Moll (Jessie Buckley), a young woman who has grown up on the island of Jersey. She lives a closed-off life, isolated on an island within an island, thanks to her oppressive, controlling family. The possibility of escaping, though, rears it head when she crosses paths with the enigmatic, elusive Pascal (Johnny Flynn).

A roguish outsider with a hunter’s knowledge of the land, he’s the go-to suspect for a string of murders that have recently taken place. He’s also exactly the kind of man Moll’s family will disapprove of. It’s hard to know which of the two is more enticing for the downtrodden young adult, and Beast revels in the emotional ambiguity of their attraction.

The title refers to monsters within, rather than werewolves prowling the scenery, but it also refers to the perilous appeal of a monster in another – a post-Beauty and the Beast allure that’s indulged and subverted with every twist of the plot. What’s brilliant about Michael Pearce’s movie is that you can’t rule out werewolves entirely, either; he shoots Jersey with a sun-dappled sheen that dives into shadowy darkness, both in its compositions and characters, and leaves you wondering what discoveries could claw their way around the next corner.

Jessie Buckley and Johnny Flynn are perfectly cast as the lead duo, occupying a gorgeously grey limbo between the domestic and the dangerous – think Midsomer Murders meets Ben Wheatley. Flynn’s edgy, hostile presence is the epitome of that pastoral horror, a Big Bad Wolf wrapped in Wuthering Heights whose unreadable expressions make him all the more intriguing. What we do know is that he’s interested in Moll – as victim, or lover, or both? – and that he’s prepared to stand up to her family to prove it.

As the even more complex Moll, Buckley delivers a turn so raw and intense that it engulfs the whole film like an Instagram filter; she’s fragile, not because she’s weak, but because her family treat her as if she is, constantly holding a past incident over her head, as though she might suddenly snap. The cloistered claustrophobia she endures cloys at the edge of the frame, and runs through the tense soundtrack; it’s telling that when we first meet her, it’s her birthday, but she’s swiftly upstaged and forgotten about at her own party. When she does let out a harrowing scream later on, it’s less a howl of warning and more a cathartic release of rage and pain – and that moving honesty finds terror in the mundane reality of a cruel household than in the otherworldly creatures of myth.

Pearce expertly assembles his ensemble with the understanding that Geraldine James’ relentlessly nasty mother is all the chilling nastiness we need – being devoured by a serial killer might even be the secret happy ending that our twisted protagonist longs for. All of which puts the wary relationship at Beast’s core in a unique place somewhere between The Graduate and the Brothers Grimm – next to Moll’s horrific home life, our couple’s unnerving, unencumbered desire tingles with excitement. A killer directorial debut.

Why you should tune into The Newsroom July 7, 2020 | Ivan Radford

The Man with the Golden Gun: A disappointing misfire... September 15, 2021 | Ivan Radford 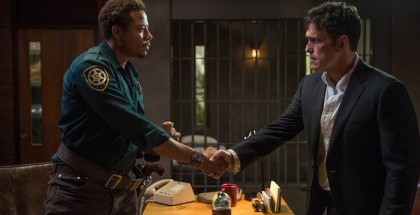