UK VOD TV recap: Arrow Season 3, Episode 11 (Midnight City) | Where to watch online in UK | How to stream legally | When it is available on digital | VODzilla.co

A welcome chance for the supporting cast to shine in Oliver's absence.

After showing us the severity of Oliver’s post-cliff-hanger injuries last week, it would have been a bit lame if the show had brought him back to Starling City just one episode later, so Midnight City duly shows us just how Team Arrow are functioning without their green-garbed spearhead, while Oliver himself continues to recover somewhere in the mountains, under the care of Tatsu and Maseo.

As it happens, Team Arrow aren’t doing that badly, all things considered. Roy / Red Arrow (okay, Arsenal, though even the show seems reluctant to push that name) is making a pretty decent fist of fighting crime in Oliver’s absence. This week he runs into a suited-up Laurel (as revealed in last week’s ending) and, after a skirmish that doesn’t go too well, he persuades her to come back to the Arrow Cave so she can get stitched up, with a side order of a stern talking to.

What’s interesting is that Laurel and Roy are both still learning on the job, as opposed to emerging as fully-fledged superheroes after their training periods (Roy under Oliver, Laurel under Ted ‘Wildcat’ Grant). This is particularly true in Laurel’s case, who clearly has a long way to go before she’s a worthy successor to Sara – she messes up a landing and winds up with a nasty arm injury during a fight.

Roy has more experience, but he’s still making his fair share of mistakes, taking split-second decisions and having to live with the consequences, such as when he fires an arrow and inadvertently gets an Alderman killed. (Aldermen dying on Arrow is becoming something of a blacker-than-black running joke.) That said, the show’s current depiction of Roy is the most interesting he’s been since his introduction – this week he gets to stand up to Malcolm, save Laurel from a thug, pull off some nifty fight moves and add a confident voice in Team Arrow’s group discussions. It’s safe to say that of all the characters on the show, Roy is the one who has benefited most from Oliver’s absence.

Starling City, on the other hand, is having a right old time of it. This week, exuberant gangster-type Brick (Vinnie Jones) makes good on his threat to take over the Glades and forces the police to withdraw, much to the horror of Ray Palmer (who offers to throw money at the police force), Captain Lance and assorted members of Team Arrow. Despite the show’s comic book premise, it’s actually quite shocking to see a city where the political figures and law enforcement officers effectively give up on what amounts to an entire section of the city. Though they’re very coy about saying it, the Glades are essentially the crime-ridden slums-slash-projects of Starling City, setting up a rich / poor divide that’s uncomfortably reminiscent of recent real-life events in America. It’s hard not to read this as Arrow deliberately reflecting those events in its own way and, as such, it’s surprisingly effective.

Meanwhile, in Flashback City, there’s a scuffle with Kelly Hu’s China White (possibly the show’s least interesting villain), but mostly the sequences
are designed to contrast Maseo and Tatsu’s loving relationship (willing to die for each other, etc) with the sadness of their current situation in the present day – it’s clear they are now separated, while something awful must have happened to have made Maseo join the League of Assassins and become Sarab. At any rate, these are stepping up the pace a bit and it’ll be interesting to see where they’re heading for the season’s end.

As for the show in general, there are a handful of great moments this week. Highlights include Felicity and Ray’s conversation about her “borrowing” his helicopter; Diggle nervously flying said helicopter with a suited-up Roy and Laurel aboard (making it the de facto Arrowcopter); Ray’s line about his suit technology (“Well, they’re not lasers. That would be ridiculous. They’re hard light beams!”); and the genuinely emotional conversation between Felicity and Laurel (passing the Bechdel Test with flying colours), in which they help each other decide what they’re fighting for in the wake of Oliver’s possible loss. Laurel’s confession that she thought becoming Sara would make it hurt less is particularly well handled.

However, there is also one truly terrible moment this week, and a sequence that amounts to a punch in the face for any Caity Lotz fans who might have been excited by her name-check in the opening credits. Apparently, someone on Arrow thought it would be a good idea to have Felicity whip up a voice modulator so that Laurel could talk to Captain Lance with Sara’s voice, thereby perpetuating his ignorance of her death. This is unconvincing on a number of levels and we can only hope that the show dispenses with that idea as swiftly as possible. It’s time Quentin learned the truth, dammit!

Oh, right. Thea. There are actually some decent developments for Thea this week: first, she convinces Malcolm to stay in Starling City and prepare for his inevitable battle with Ra’s al Ghul; and second, it’s revealed that rather than be a decidedly pathetic love interest, blonde DJ Chase is actually a member of the League of Assassins, reporting to Ra’s al Ghul. All of which suggests the Ra’s al Ghul plot is about to ramp up in a big way, once Oliver gets back. 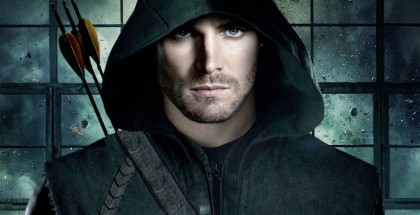 Collaboration and curation: How Arrow is setting new targets for its streaming s... April 3, 2021 | Ivan Radford