UK TV review: There She Goes Season 1 | Where to watch online in UK | How to stream legally | When it is available on digital | VODzilla.co 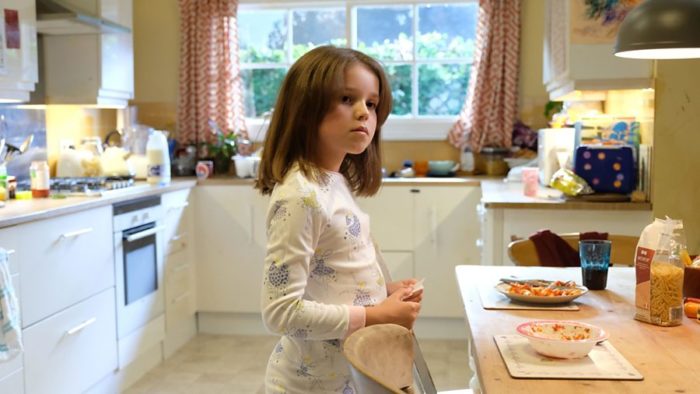 This brave drama about the challenges of parenting is frankly funny and heart-wrenchingly honest.

Raising a child isn’t easy. Raising a child with learning difficulties is even harder. There She Goes is a bravely honest look at the challenges involved in looking after, encouraging and educating a daughter when communication is painfully restricted – a comedy drama that bristles with the huge pain, tiny victories and (more frequently) challenging lows.

Our window onto this anguish-filled struggle are Simon (David Tennant) and Emily (Jessica Hynes), who are doing their best to rose seven-year-old Rosie (Miley Locke). Together – and, more often, separately – they have navigate everything from giving Rosie baths to taking her to the swimming pool, not to mention the difficulties of going out for a family meal.

Throughout, Shaun Pye’s script is stuffed with angry one-liners, delivered with relish by the cast. Tennant is wonderfully depressed but in denial (and halfway up a wine bottle) a defeated dad Simon, while Hynes (who recently made her directorial debut with the moving drama The Fight) balances deadpan comic timing with a blank unhappiness that rings powerfully true. They clash with bitterness, or just don’t communicate at all, and the challenge of them reconciling their love for each other and their daughter with the reality of their situation is one that repeatedly delivers heart and humour aplenty. In between them, seven-year-old Rosie is performed with frustrating, charming and innocent energy by the marvellous Miley Locke.

Flashing back to when Rosie was first born, the five-part drama manages to show us the family from multiple sides with growing nuance, increasing depth and constant understanding; we witness Simon at his shouting, repugnant worst, but also see the power that a single, unexpected giggle can have in bringing people together. All manner of awkward questions are tackled bluntly and with heart, as Simon confronts his mum and stepdad over why they want to take their other child, Ben, away on holiday but not Rosie – and Ben himself, played with understated grace by Edan Hayhurst, has to work out how to celebrate his birthday without it being stolen by Rosie, while still including her. One telling scene sees Simon and Emily go out on a rare date by themselves, only to end up talking about Rosie anyway. This is a gorgeously observed, superbly performed drama, one that leaves you laughing at the saddest things, but grateful for them existing in the first place.

There She Goes is available on BBC iPlayer until 27th August 2020.