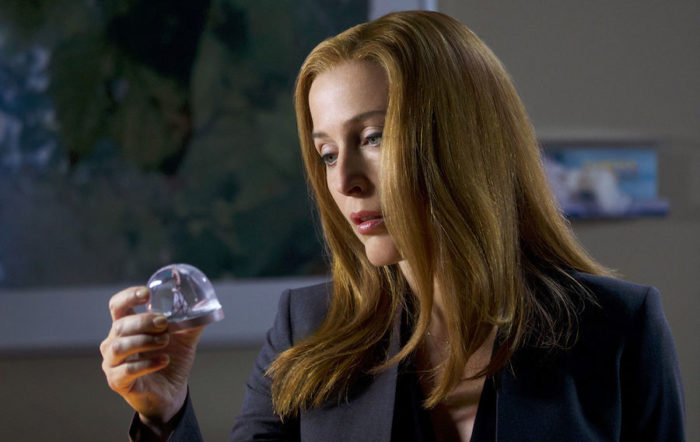 Monster of the week

Balance of the two

“You see what I want you to see” is the tagline for Episode 5 of The X-Files Season 11, and it’s one that turns out to have heart to go with its threatening spookiness.

Things start off in classic case-of-the-week style, with two teenagers – Sarah Turner (Madeleine Arthur) and Brianna Stapleton (Sarah Jeffery) – attempting to stab each other to death. Waking up on a boat, they circle each other and pursue each other in a strange, slumber-like state, both convinced that the other is a monster, known as “Ghouli”. It’s only when they wake up in hospital that they realise that they were mistaken. Scully (Gillian Anderson), meanwhile, has her own bout of weird dreams, as she finds herself stalked by some kind of shadowy presence, who lures her into a stranger house.

Before you can write the whole thing off as yet another Dana-gets-into-a-perilous-situation horror story, though, Ghouli reveals itself to be something else entirely. Rather than a standalone slasher, this is actually a mythology episode, picking up the threads of the opening chapter. That, you may recall, dared to kick off this 11th run with the revelation that William isn’t actually Fox (David Duchovny) and Scully’s son after all, but rather the result of sinister experiments done by the Cigarette Smoking Man.

It was an absurd, borderline ridiculous twist, and it takes real ambition to try and follow that up. It’s a good job, then, that they’ve got James Wong, an The X-Files veteran, to juggle all the balls in the air. He does a surprisingly good job, given the script he has to work with, which, in true X-Files fashion, has more than its fair share of on-the-nose clunkers.

He helps Anderson to carry the burden of the storytelling leaps, and she shoulders it well, as Scully becomes convinced that this sleep paralysis link she seems to share with the Ghouli is similar to the one she has with William – so surely, therefore, they are one and the same? It could seem a little too half-baked, even in a show about outlandish conspiracy theories, but Anderson sells it expertly, as Scully sits in a morgue next to a body bag for their suspect and delivers a heartfelt monologue to the thing she thinks might be her son.

Into the mix wanders a mysterious onlooker, whose job is mostly to deliver such prophetic advice as “Don’t give up on the bigger picture”. Played with the right amount of mysticism by François Chau, he’s a more important figure than we initially realise. Any subtlety, though, is lost on the other side of the story fence, as Duchovny is put on exposition duty, leading to a scene between Skinner and the CSM who point out that our agents are close to uncovering “Project Crossroads”. Nonetheless, even as the episode dovetails into setting up more William-based shenanigans for future episodes, there’s enough emotional weight to this hour to make it work – at a point when The X-Files could be zooming out to tee up a grand mythological arc for its presumably final season, the series makes the welcome decision to keep its bigger picture small and personal. Here’s hoping that attitude stays in place for Season 11’s second half.