UK TV review: The Walking Dead Season 10, Episode 3 (Ghosts) | VODzilla.co | Where to watch online in UK | How to stream 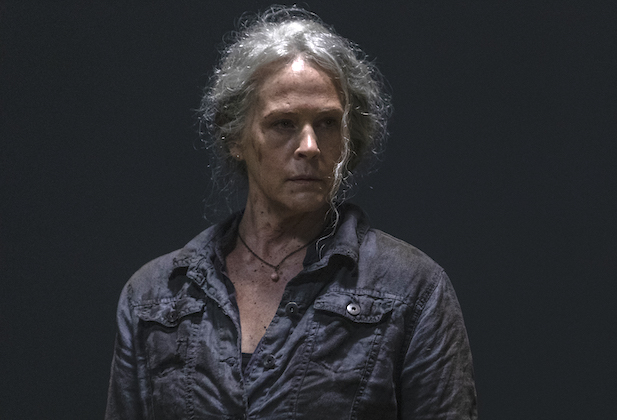 Ghosts of Christmas Past

This is a spoiler-free review of Episode 3 of Season 10. Already seen the episode? Read on for full spoilers after its UK broadcast.

Before the Whisperers, The Walking Dead had an alpha, and it was not Rick Grimes. Since axing (pun intended) her abusive husband, Carol Peletier (Melissa McBride) has only grown in strength, confidence and attitude. She has done things for the good of the group that no other could bring themselves to, things that even got her expelled for a short period of time despite being right. She is the one willing to get her hands dirty for the sake of the group, even at her own grave expense. Ghosts is close to a Carol-centric episode and adds another layer to her character – but is what we’re seeing the real Carol, or merely a manifestation?

Opening with a fast paced bloodbath, Ghosts gets off to a good start. Before the credits you are as out of breath as the survivors, who are dealing with wave after wave of the undead clawing at their door. The walkers keep coming for two days straight causing sleep deprivation and riling tensions within Alexandria; they aren’t just fighting zombies anymore, they’re fighting fatigue.

Believing this to be the work of Alpha (Samantha Morton), as punishment for Alexandria crossing the Whisperer borders, trying to weaken her opposition and cement her place at the top of the food chain, Carol spies an opportunity when a meeting is called between the two factions – but opportunity isn’t the only thing that is seeing as ghost from her past haunt her.

As everyone deals with exhaustion, Father Gabriel (Seth Gilliam) pairs Aaron (Ross Marquand) up with an unlikely ally in Negan (Jeffrey Dean Morgan). It is a coupling that neither are happy about. Aaron doesn’t want to rely on Negan and Negan doesn’t want to be the scapegoat for the current bloodshed. Negan tips the balance between light relief and deadly seriousness, switching with ease between the two as the pair have a confrontation. It is an excellent idea to unleash Negan from his cell, it gives him fresh environments and new scenes to steal. To further compliment his screen presence, he and Aaron hide in a shack from walkers, the darkness bringing brilliant visuals, lit by flashlight and framed low as Aaron struggles on the floor, flashing shadows of Negan swaggering around holding a crowbar dripping blood – much like a beloved baseball bat.

The lack of sleep is affecting everyone. Eugene (Josh McDermitt) finally finds the courage to speak his mind to Rosita (Christian Serratos) and Siddiq (Avi Nash) continues to struggle with his trauma. It is Carol though who is taking it worse than everyone, unable to sleep for fear of nightmares, popping pills to keep her alert when all they are doing is distorting her view of reality. Her confusion weaves within the episode and will have you questioning what really happened and what was just an illusion. Ghosts calls for focused viewing, misperception and shadows misleading us at several turns, most compelling characters to watch now. Ghosts twists this fearless, renegade character into one of self-doubt and sadness, a side of which we haven’t seen in Carol since the first season. With the ghosts haunting her, w may be on the way to another Carol show-stealing moment, there can only be one Alpha in this series after all.

The Walking Dead Season 10 premieres on FOX UK at 9pm on Mondays. Don’t have pay-TV? You can also stream it live and on-demand on NOW, for £9.99 a month, with no contract and a 7-day free trial. Seasons 1 to 9 are available on Sky Box Sets and NOW until November 2019.

– During the meeting at the North border between Alexandria and the Whisperers, Daryl can see that Carol is visibly upset at the spike that used to hold Henry’s head, yet this doesn’t stop him using a very poor choice of words. He yells “heads up”. Come on Daryl, read the room.

– The confrontation is for punishment. Alpha has seen the survivors cross her land three times, all times it was thought the Whisperers weren’t around. This makes things even more spooky: how are they always watching and where do they hide? Do they walk through Alexandria? (Alpha agrees, however, that in context, they only walked the Whisperer land for safety, not for any violence or espionage, so there will be no bloodshed today. But she is taking more land.)
– The loss of their hunting grounds causes Carol to speak out. Unbeknownst to anyone she is hiding a gun and, when she spots her moment, she raises it and fires. But Michonne (Danai Gurira) is quick to adjust Carol’s aim and defuse the situation. Alpha understands Carol’s frustrations – they are both mothers who have lost their children, both alphas in their communities. In a way, Alpha relishes being challenged, as it is an opportunity for her to show that she is the top dog. If Carol is so hungry for revenge, this could lead to an intense stand-off between the two.
– During one of Carol’s hallucinations, she finds a book called ‘Working in the Home’. On the front cover there is a family portrait, but when Carol looks at it, she sees the faces of herself and Henry on it. Not only that, the other children around the table are all those from Carol’s past, including Sophia, Lizzie, Mika and that cookie-loving Sam Anderson. It’s a fun little Easter egg that also acts as Carol’s vice, that she’s unable to help the children she has loved… and there have been a lot of them.
– Aaron gets to sport his new mace on his metal arm and puts it to good use. He has an awesome weapon, yet Negan has to use a broom handle. This is the spark of discontent between the two that shows not everyone in Alexandria is ready to forgive Negan, even this many years later. This scene also shows that while Negan has changed in so many ways for the better, there still may be a hint of the old guy still there, deep, deep down. We want to see more Negan – if Carol can’t contain her ghosts, releasing his inner monster may just be what is needed to take out Alpha.