UK TV review: The Leftovers Season 3, Episode 4 (G'day Melbourne) | Where to watch online in UK | How to stream legally | When it is available on digital | VODzilla.co 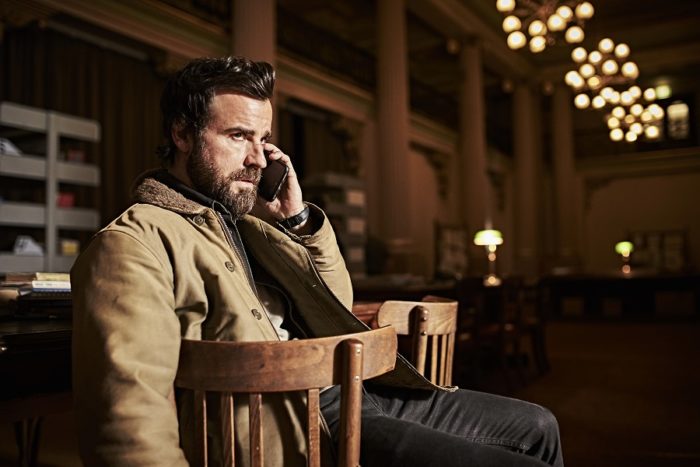 The Leftovers' final run hits a moving midpoint with a painfully acute dissection of a deluded romance.

With the final season of The Leftovers available all at once on-demand, we’ll be bringing you our thoughts on each episode one at a time. Warning: This contains spoilers.

If anyone can make A-ha’s pop classic about taking a chance on romance sound darkly tragic, it’s The Leftovers. HBO’s series has being hauntingly, hypnotically bleak from the start, but Season 2 and 3 found a cathartic font of hope in the relationship formed between Kevin Garvey (Justin Theroux) and Nora Durst (Carrie Coon). Only a few episodes after taking each other on, though, they’ve literally gone, fleeing Texas for Australia.

It’s here that Nora hopes to debunk two scientists’ claims to be able to reunite people with their Departed loved ones – by blasting them with radiation found at Departure sites. Or, at least, that’s what she tells Kevin. We already know that on one level, at least, if not several, she wants the process to work.

The Leftovers is full of people pretending not to feel the way they do – and, in some cases, deceiving themselves as well as others. It’s only been one episode since we saw Kevin and Nora lie to each other about being happy, but it’s easy to forget just how long they’ve been trying to make that pretence come true: we’ve jumped three years later with Season 3, which means that their relationship has gone through a lot more ups and downs than we’ve seen on screen. A custody case over Lily saw the baby go back to her mother, but we learn here that Nora didn’t exactly oppose it. Kevin, meanwhile, has gradually become madder than ever. It’s not that their affection has become routine; their pretence has.

Nora, then, leaps at the chance to solve all of those problems in one fell swoop, only confessing to Kevin on the airplane over that she hasn’t really been sent officially by the DSD to investigate – confirmation, once again, that her job is, in part, a personal crutch. It also highlights just how wide the gulf between them has become. Look at how she tapes the money to her body without letting Kevin know, then smuggles it through airport security. It’s not that she didn’t want him to be acting suspiciously: she just didn’t even think to include him. He’s going with her, but this is a solo trip – and it might well be one-way.

“We’re in a toxic co-dependent relationship and we’ve both come to realise that we’re better off apart than together,” she quips, when asked by Kevin what she’ll say to the scientists when they quiz her about her relationship with him – surely, he reasons, a sign that she’s too invested in staying put on planet Earth and not risk Departing herself. She plays it as a joke, but that humour covers up a serious, honest answer: the truth is out there, even though they won’t admit it. When it comes to airport security, Kevin is the unexpected item in her baggage area.

Things don’t improve after a steamy bout of sex – something they repeatedly use as a way to move the conversation on from their failing relationship. Nora starts reading aloud from Matt’s Book of Kevin, particularly the part where it describes Kevin killing Patti. In Episode 2, the way Nora could lighten the tone of the whole series, and their relationship, by joking about his Messiahdom was a warming example of their comfort with each other. Now, it just reinforces how much Kevin hasn’t told her about it all – both of them are withdrawing into their own secrets. 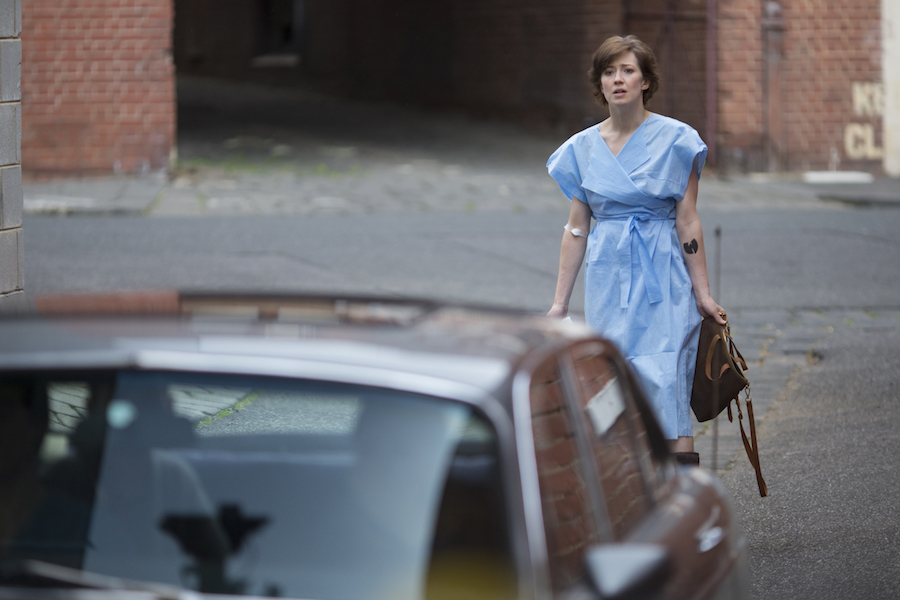 Again, Nora grasps at an escape route: a phone call telling her to go and meet Dr. Aiden and Dr. Becker. A fraught journey (The Leftovers is that rare thing: a fictional show that is too grounded in reality to allow anyone to travel from one place to another without something going wrong) sees her left with a baby by a mum on her way to a nearby job interview. When her bus arrives, though, Nora races to return the kid and board the vehicle – after running behind it down the road.

She’s compassionate, then, but also desperate (a word that we keep coming back to in this final season). Does that mean she’s a prime candidate for the procedure or not? The doctors are an intriguingly odd couple, despite only being on screen for a few minutes, as one plays nice, the other plays nasty. “Would you kill a baby if it would cure cancer?” they demand of her – and she seems to deliberately give the cold, logical answer. Is that her trying to seem detached from the real world? Or is that her being sincere? The fact that we can’t tell is testament to Carrie Coon’s fascinatingly ambiguous performance.

The scientists, though, have no problem deciding that she isn’t right to go through with it – and again, Nora is left chasing after a departing vehicle to beg for a chance to tag along. (Curiously, she gave a different answer to the man we saw in Episode 3 trying to set himself on fire, but still didn’t get accepted. Is this a hoax or not? We’ll probably never find out.)

Kevin, meanwhile, is busy with his own voyage of discovery, as he spots Evie in the background of the news on the hotel TV. A quick phone call to Laurie and her Facebook-searching skills later, and he’s off to the library where Evie works to confront her. Justin Theroux is again flawless in his balancing act between forcibly composed and furiously unhinged (note to self: when trying to appear non-psychotic at a library, don’t say you’re looking for a book called ‘Assassins’).

Evie, though, agrees to speak to him privately, where he unleashes his anger and confusion. And we’re right there alongside him – if she’s still alive, does that mean John really was right all along? And what does that mean about the finality of death in this show? Can everyone can back from the other side? Or was it all a massive prank on Evie’s part?

Another phone call to Laurie ends up providing us with the answer: it isn’t Evie at all. It’s just a woman with glasses, which made Kevin think it was Evie. The supernatural, once again, is shut down in favour of something altogether more unsettling.

“You never tell someone in the midst of psychotic break that they are in the midst of psychotic break, remember?” Laurie tells Kevin, as she talks him down from the brink of sanity. “You have to indulge that person’s delusion and find common ground. Otherwise, it’s very likely that they’ll hurt themselves. I don’t want you to hurt yourself, Kevin.”

It feels like a turning point halfway through this season: the moment when the delusions of Nora and Kevin both crumble. Like Nora, Kevin’s been putting on his own pretence to get closer to some form of closure – one of the episode’s best moments sees him approach a bloke dressed as a koala bear expecting something dramatic and meaningful to happen, only for it to be a bloke dressed as a koala bear.

The music builds for that non-revelation, a perfect encapsulation of how well, and how subtly, The Leftovers immerses us in its characters’ perspectives. We don’t just witness their delusions; we share them. Throughout the episode, we see Evie as Kevin does: John’s daughter. It’s only when his eyes are opened that we see her as a scared stranger. (The episode, fittingly, takes its title from the news programme on which Kevin thinks he sees her.)

The same’s true for the whole Australian adventure: Nora going Down Under makes sense to her. Kevin going with her makes sense to him. So of course we go along with it. It’s only when Laurie points out what they’re doing is stupid that we step back and see the truth: this is not a rational action to take, especially when it’s just days from the anniversary of the Sudden Departure. But neither of our couple are rational – and, moreover, neither think the other one is rational. Nora’s consumed by grief an willing to die to be with her family again. Kevin may not think he’s the Messiah, but he does talk to people who aren’t there. 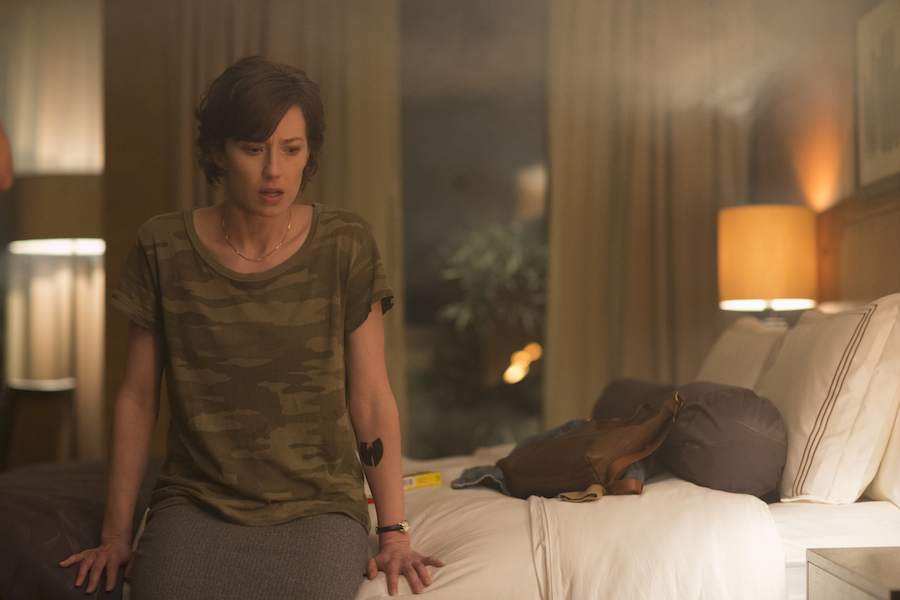 When they meet back at the hotel, confusion lifted, their shared lucidity leads to brutal blows.

“You can’t have a kid because then you’d have no excuse,” Kevin declares, bluntly. “You wouldn’t be a victim anymore. You’d have to be okay. No one would feel sorry for you.”

The opening credits once again prove to be entirely prophetic, as Ray Lamontagne and the Pariah Dogs warn us that “This Love Is Over”. But it’s the use of A-ha that really marks The Leftovers out as being at the top of its game: we hear their signature track three times throughout the episode, each time different, as our perceptions shift. When Nora arrives at the scientists’ meeting point, one of them is playing Take On Me on a piano, giving the track a quiet, melancholic edge. Then, as Kevin runs through the streets, it’s performed by a brass band in full swing – a burst of absurd mania. Then, finally, the original song kicks in: after two covers filtered through their POVs, reality has never sounded so devastating.

It’s a painful climax to the show’s mid-point, as their relationship has hitherto been the contrast to the show’s generally morbid tone. Forget Matt’s sermons: if this couple could make it, so could everyone. But now, they’re clearly moving in opposite directions: after Season 2’s mind-opening finale, Kevin is starting to doubt himself, while Nora, fuelled by word of a possible reconciliation in the afterlife, is starting to belief in hope. And so Kevin leaves Nora in their hotel room wth the Book of Kevin burning in the sink, setting off the fire alarm. Kevin’s dad arrives outside to pick him up (with Grace in the passenger seat) and they drive off – a reunion that brings back all the vision of Biblical apocalypse showered upon us in Episode 3. As Nora sits under the sprinklers, though, the end of the world has, in a way, already happened. Floods come in different sizes.

The Leftovers Season 1 to 3 are available on-demand through Sky Box Sets. Don’t have Sky? You can also stream it on NOW, as part of a £7.99 monthly subscription – with a 7-day free trial.