UK TV review: The Handmaid's Tale Season 3 | VODzilla.co | Where to watch online in UK | How to stream 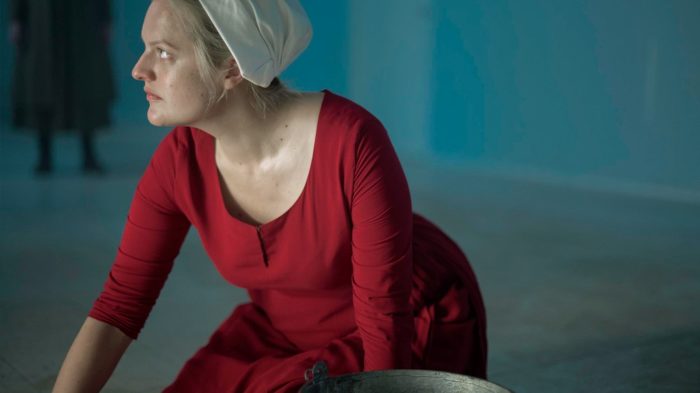 Change in the air

The Handmaid's Tale returns with a burning desire for justice - and a promising hint of hope.

Warning: This contains spoilers for Season and 2 of The Handmaid’s Tale. Not caught up? Read our spoiler-free review of Season 1 here.

Season 2 of Hulu’s drama left Margaret Atwood’s book behind, and descended into a repetitive, gruelling cycle of nasty abuse and burgeoning rebellion, one that ultimately moved away from dramatic territory and towards something verging on sadism. The prospect of going back to Gilead for a third dose of cruelty and resistance, then, isn’t exactly one to relish. But for the first time, there’s hope in the air – and, after two bait-and-switch seasons of frustration, that hope is allowed to linger.

We pick up where we left off, with June in the rain-drenched street, turning away from freedom so that she can go back to Gilead and wreak vengeance. It was a surprising move, one decided by the show’s writers more than her character, but Moss does a fantastic job of selling June’s conviction to make a difference; as she storms back to Gilead, with a little help from Commander Lawrence (Bradley Whitford), the shock from Emily (Alexis Bledel) is soon forgotten, thanks to Moss’ determined, scowling mask of retribution. She may be trusting Nicole to Emily, but she’s doing it to get Hannah, her older daughter, out from Gilead too.

It’s a quest retains an added urgency given the events of the real world, which have seen women’s access to abortion in certain parts of the USA unjustifiably, immorally limited – The Handmaid’s Tale may have verged into gratuity last season, but it hasn’t lost an iota of its rage-inducing relevance.

That rage is spreading, too, as we see Serena (Yvonne Strahovski) taking dramatic steps to draw a domestic line in the sand, burning down her whole household (a stunningly shot scene that’s as jaw-dropping as any other visuals the show has served up to date).

And yet there’s still a tragic fatalism looming over it all, as June seems to acknowledge that she will probably never be free of Gilead and will likely die there. One who won’t, though, is Emily, as we see her flee to Canada – a sequence that isn’t surprising in any way, but certainly is satisfying. Alexis Bledel conveys so much in her facial expressions alone, as she moves from fear at the policeman who finds her across the border to relief, but not before working through trauma and terror – even as she’s applauded by the staff of a nearby hospital. Emily even manages to track down Luke and Moira, with baby Nicole in tow – and a picture of Hanna to boot, which makes their reunion all the sweeter.

Back in Gilead, things are darker for June, as she’s swapped over to a new host family. Until, that is, we realise that her new host will be Bradley Whitford’s Lawrence, a man whose loyalties remain enigmatic but whose actions place him firmly on the side of the rebellious handmaids. There’s the hint of a smile as he welcomes her to his house, which paves the way for a rewarding new dynamic that gives The Handmaid’s Tale a much-needed breath of fresh air – wafted by a new situation that won’t simply revolve around repetitive punishments.

There is, of course, punishment for the abduction of Nicole, and June is whisked away to the Red Centre to receive it. But as she’s strapped to a table, the camera pulls away from the room and backs down the corridor, leaving the cruelty to take place off-screen at last – a sign that things are turning over a new leaf in more ways that one.

That’s evident in the way that the show is opening up its focus to explore the greyer areas of its moral fringes. Yvonne Strahovski’s Serena is at the heart of that, as we once again get challenged over how much sympathy to have for someone so instrumental in the formation of Gilead; on the one hand determined to do anything to get back Nicole after June handed away “her” child, on the other angry and sick of Fred (Joseph Fiennes), and yet also saddened by the idea of losing her place within this oppressive society, she’s a fascinating presence, with Strahovski always peeling back new layers.

Even Ann Dowd’s Aunt Lydia, who is beaten up in the opening chapter, finds new horrific ways to balance tenderness and authoritarian abuse – one second, she’s showing concern and respect for June’s continued presence, the next she’s beating people with a walking stick. She’s an outspoken foil for Joseph Fiennes’ Commander Waterford, who is increasingly resigned and powerless while still demonstrating time and time again the doors that can be opened through the calm pretence of order and the careful manipulation of international politics – seeing he and Serena coordinating filmed broadcasts to call for the return of Nicole are chillingly plausible.

But while the complicated bonds that form between women, children, adoptive mothers and biological parents run through the season with growing nuance, the most interesting addition to the mix is Whitford’s Lawrence, who, like Serena, appears to be showing signs of regret, if not redemption. His concern, more than anything, is for his wife, and their marriage – and apparent refusal to participate in Gilead’s mandated monthly bedroom ritual – is a source of positivity and compassion in a world so often missing it. Their scenes are the closest, in some ways, to the glimpses of the outside world that we still get peppered throughout – scenes that take us back to just before Gilead established itself, and only get more harrowing with each new detail. (Street protest footage feels like it could have been ripped from current news broadcasts.)

Lawrence, though, remains a central rock of the Gilead society, and underneath his seeming kindness is a visible streak of self-preservation, and Whitford is brilliant at juggling all of those shades of grey beneath his flawless white beard – a scene that sees him reading a book to a group of children is wonderfully conflicting.

While The Handmaid’s Tale has renewed its focus on characters, though, its story still hasn’t quite found the groove of its first season, with the pacing as uneven as the second. But as a plan to evacuate kids from the state takes hold during the final half, things get grippingly tense, fuelled by the growing ruthlessness of June, who, at one point, even accidentally pulls a gun on a child.

With Elisabeth Moss sinking her teeth into June’s dilemma, the constant threat of narrative inertia and repetitive plotting is overtaken by a thrilling drive towards a climax that, finally, gives us something to hope for. If Season 1 impressed by immersing us in a shared feeling of loss and dread, Season 3 marks a return to form by inviting us to share in moments of joy as well as fear, and witness tears that are happy as well as sad. The result is the run of episodes that Season 2 should have been, and leaves you cautiously optimistic for Season 4, especially if Margaret Atwood’s new book, The Testaments, provides new material for the show to navigate.

The Handmaid’s Tale Season 3 finale is available on All 4 until 1st October 2019.