This wittily written musical drama us a gripping, moving and surprising story of consequences.

It’s been over a year since Shiro’s Story was released on YouTube, and since then, it has racked up more than 6 million views for each of its three episodes – not bad going for a low-budget independent musical drama with no marketing budget.

The series tells the story of Shiro (Joivan Wade), a young man trying to raise his daughter alongside his partner, Kiera (Rita Bernard-Shaw). He has turned to drug dealing to raise enough money to support them, but his world is turned upside down when he discovers a shocking secret: this his best friend, Kyle (Percelle Ascott), is actually the father of his daughter.

Joivan Wade is excellent as Shiro, a well-meaning, thoughtful guy whose hurt feelings are sincerely, empathetically visible. The script ensures that all of the characters are more than what they do for a living; Shiro may have broken the law, but that doesn’t mean he’s a bad guy.

He’s supported convincingly by Rita Bernard-Shaw as Kiera, and Percelle Ascott as Kyle, two people who appear loyal and friendly but soon reveal their own secrets and motivations. Like Shiro, we soon found ourselves in an environment where we can’t trust the others around him.

Rather than leave them as unknown ciphers, though, writer and director Rapman (aka. Andrew Onwubolu) takes care to fill in every gap across the entire ensemble. Rapman’s masterstroke is using rap to do it: the story is narrated by his own music, which serves up exposition in rhyming bars that immediately instil a sense of tone and location. Even more crucial is the way that it condenses and compresses every story beat; it’s the most efficient piece of storytelling since Shaun the Sheep: The Movie, skipping through plot details and essential information in the briefest of seconds.

Rather than just stay as a kind of Greek chorus, Rapman also uses his music to tap into each character’s feelings, memories and behaviour. They do speak, but the dialogue is minimal, each character joining in to voice the odd quote or recalled exchange in the middle of a wider rap. They all learn the songs by heart so that it can all be edited together seamlessly; the result gives maximum weight to the speech that does happen outside of the music, while allowing for sequences and confrontations that would take minutes to assemble to hit you straight in the gut within seconds.

In under 45 minutes, you’ve given a story that many would struggle to fit into 90 minutes, covering love, drugs, violence and betrayal, and Rapman gradually escalates the stakes to gripping, repeatedly surprising ends. It all rings with a realism befitting of the story’s true origins, and bursts with operatic vision, intensity and creativity. It’s a calling card for Rapman, a calling card that announces his ability to depict the reality of life often missing from our screens – no wonder, then, that this weekend sees him adapt his YouTube series Blue Story for UK cinemas. 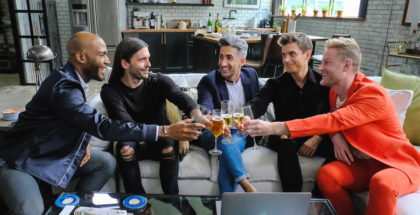