UK TV review: Search Party Season 2 | Where to watch online in UK | How to stream legally | When it is available on digital | VODzilla.co 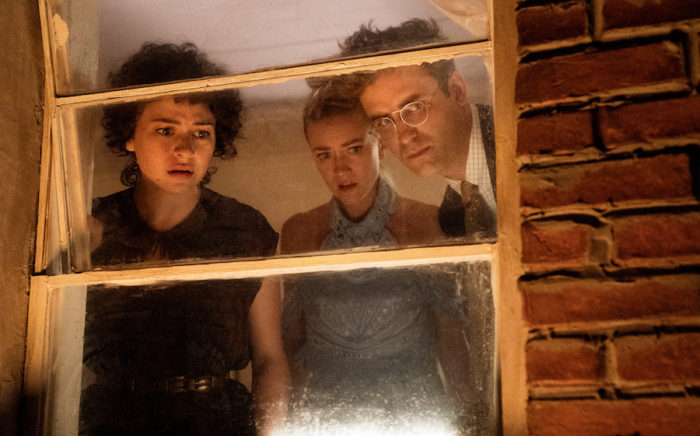 Dark, hilarious, unpredictable and unique, Season 2 of Search Party is one of the best TV shows of 2017.

Warning: This contain spoilers for Season 1 of Search Party. Not caught up? Read our spoiler-free review here.

Part-mystery, part-Millennial satire, Search Party came out of nowhere to be one of the best TV shows of 2016. At the end of 2017, Season 2 surprised by doing the same thing once again.

The show follows Dory (Alia Shawkat), a fragile, frustrated, life-long doormat, who’s not particularly proud of her impact on the world. So when she learned that Chantal, a girl she barely knew in college, went missing, she became obsessed with finding her. But Dory and friends – including uptight boyfriend Drew (John Reynolds), self-diagnosed narcissist Elliot (John Early) and struggling actress Portia (Meredith Hagner) – weren’t crime solvers, and their hapless investigation spent more time uncovering their own privileged self-absorption than anything meaningful.

Season 1’s finale dropped its delicate sitcom into a black hole, with a bold one-two punch: firstly, that Chantal (Clare McNulty) had simply run away for equally self-centred reasons, and secondly, Dory accidentally murdering Keith, a private detective who was after Chantal’s missing persons reward, rather than something more sinister involving a cult, as Dory suspected. All her intricate detecting and their Scooby-Doo conspiracies were swiftly bludgeoned to death in one unexpected blow.

Season 2 continues to brutally bat away our expectations for 10 more episodes with phenomenal success – and that’s largely thanks to the way the show boldly shifts its tone. If Season 1 was a college student’s take on Miss Marple, this is closer to Hitchcock, as our gang find themselves searching not for a missing person but for a way to escape detection. Their survival, and determination not to be found out, is a surprising direction for the programme, but it’s one that provides a gripping thread of suspense, not to mention a sinister depth to every situation. Throughout, the heightened stakes are carefully maintained by cliffhangers between every episode, primarily driven by Keith’s loved ones, who begin to close in on what they suspect is foul play – watch out for Scrubs’ Judy Reyes as the intense, intimidating Deb. By the time Dory is trying to fake emails from Keith’s computer, you’ll be screaming at the screen in horror, something that would’ve been impossible to imagine during the first season.

Alia Shawkat remains remarkable in the role, which is perfectly matched to her combination of awkward likeability and visible panic – her deteriorating mental condition is a stark contrast to the calmer reaction of ex-boyfriend Drew, who busies himself with work and finds himself the object of Chantal’s affections. The show subtly makes sure we empathise with Dory, as we share her escalating hallucinations of the murder over and over again, even as we increasingly judge her for bringing this all on herself.

Meredith Hagner’s Portia Davenport, meanwhile, gets an emotional journey that’s no less complex, as she finds herself taken under the wing of Elijah, a theatre director who lives up to his evangelical name with a righteous bearing and a fondness for delivering what he claims are home truths. Portia, attempting to come to terms with her complicity in something horrible, is sucked into Elijah’s ugly whirlpool of manipulation, as he toys with her susceptibility – both off-stage and on, where she’s cast in a play about the Manson murders. Played with a heartless, creepy manner by Jay Duplass, it’s a reminder of just how good he is in front of the camera, a darkly pertinent echo of the abuse rife in real life Hollywood, and an unsettling demonstration of how tragically fragile Portia is.

But the standout of the show is the endlessly scene-stealing Jon Early, whose turn as Elliot has never been more mesmerising… to himself. A habitual liar, he somehow turns that need to have everyone amazed by him into a book deal, in which he confesses how much of a liar he is – a task that he carries out with no end of shrieking and loud giggling. Underneath that uber-confident facade, though, is a breakdown waiting to happen, and when it bursts above the surface, it’s hilariously painful to witness, as Elliot’s hair falls out and he starts avoiding sunlight.

The brilliance of Search Party lies in such astonishingly precise character work: the whole show hinges upon the charm of its young leads, while subjecting them to scathing criticism. They’re the best worst people you’ll ever meet, a combination that somehow makes them more human with every horrible, rash decision they make. And yet there’s a satisfying justice in the way it unfolds: the more unconscientious they become, the more unraveled they get – even Drew, the most rational and detached of the bunch, channels his unspoken frustrations into a despicable scheme to get himself an undeserved promotion. Clare McNulty, as Chantal, slips gamely into the whole ensemble, never letting us forget the folly of Dory’s actions, while also making everyone around her mostly annoyed or miserable; her presence is the polar opposite to the sincere, innocent dedication of Deb and co. to finding Keith, a gang hunting their beloved with exactly the kind of conviction and purpose that Dory once longed for.

Even with 30-minute episodes, it’s a deceptively tricky balancing act, and co-creators Sarah-Violet Bliss, Charles Rogers and Michael Showalter masterfully lead the impeccable writing and direction, never letting the carefully honed tone slip too far into darkness or farce. Even April, Dory and Drew’s rude neighbour (the always-amusing Phoebe Tyers) becomes a source of genuine peril, as the series twists the knife into your nervous system. By turning our once-naive hunters into the hunted, Search Party’s sophomore run matures into a gripping study of suspense and guilt – an exploration of what humans are capable of if they don’t have the ability, or desire, to know what it’s like to be anyone but themselves. And that moral edge matches the series’ meticulous pace, which accelerates to a conclusion that feels unavoidable yet eons away from the show’s starting point. Shocking, laugh-out-loud funny and entirely unique, Search Party Season 2 is even more unexpected than the first – and it just might be better too.