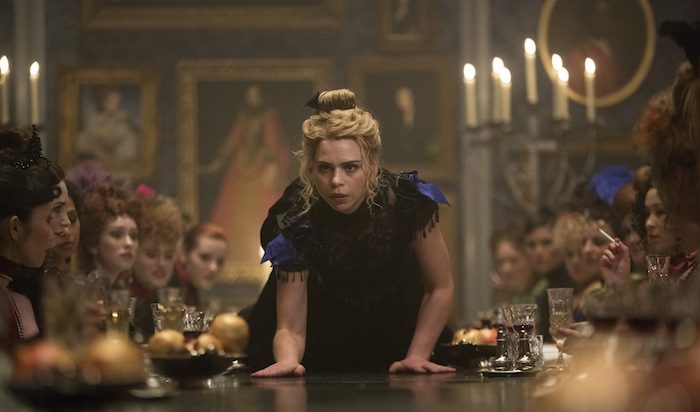 Who’s the better boyfriend: Dr. Frankenstein or Dracula? Any TV show based around that question deserves to win all the awards. As Penny Dreadful Season 3 nears its conclusion, that dilemma has never been more keenly felt or more deepy explored.

Frankenstein, as we know all too well, is a simpering, controlling fellow, who desperately longs to have his precious Lily back under his thumb – to the point where he’s willing to inject electrified serum into her eyeballs to turn her into the woman he thinks she should be. (Call us modern, but that’s not the sign of a healthy relationship.) Dracula, on the other hand, swoons over Vanessa (Eva Green), desiring only too much to devote himself to her and love her the way she is. The fact that he’s the brother of Lucifer and the lord of the undead is, well, just a bit inconvenient. Like, he can probably be straightened out after a visit to her parents, right?

Penny Dreadful has always been at its best when connecting the dots between its seemingly disparate literary figures and what unites these two would-be couplings is a gorgeously detailed study of self and identity. Vanessa has long wrangled with the balance between light and dark within her; as Dr. Seward notes in a conversation with Renfield, she’s capable of manifesting several personalities all at once. Lily’s transformation from Brona, meanwhile, has been wonderful to witness – and, after a surprising glimpse of Lily visiting the grave of Brona’s child, Sarah, which suggests that she remembers her old life, Lily may even be a conscious choice of identity. After all, what better way to strike back at the mistreatment of her and other women in a sexist, patriarchal society?

Ethan, too, makes a choice to return to something of his old self, following a series of revelations by Kaetenay – revelations mostly involving forecasts of doom, brought about by Dracula and Vanessa doing it. Kaetenay finally gets the chance to earn his screen-time here, with his bond with Ethan almost approaching that of father and son; combined with a welcome opportunity for Malcolm and Ethan to chinwag, the contrast to the unhealthy relationship between Ethan and his real dad is striking. Saved from that destructive relationship, he can be the Ethan we (and Vanessa) first fell in love with. The turnaround from Episode 6 may be quick, but Josh Hartnett, Timothy Dalton and Wes Studi give these scenes enough weight to convince us that it’s a natural path for Ethan to go down. Go Team Werewolf.

Reconciliation is also on the cards for John Clare, who reconnects with his wife and son without either of them screaming. Rory Kinnear’s hushed delivery of monologues detailing his inhuman acts is the kind of thing that Emmys are made of – but even more powerful is the reaction of his wife, who simply embraces him, regardless of his past. Love, we’re shown, can be a restorative to even the most wounded soul. And, for once, we see it’s not something that solely exists between outsiders.

Which brings us nicely to Dorian Grey, the man who has no soul. If Frankenstein’s a terrible suitor, forcing Lily to conform to his idea of a “proper woman”, Dorian’s even worse, betraying her so that her violent tendencies can be curbed. Director Paco Cabezas captures Lily in full, glorious flow, as she stomps up and down a sumptuously lit dinner table, demanding loyalty, murder and rebellion from her army of hysterical women. It’s gruesome, it’s garish and it’s deliciously depraved, with Billie Piper once again milking the best lines of the script, practically smacking her lips with relish.

But alas, her triumphant reign is short-lived, as Dorian pops her in the back of a carriage and takes her to Bedlam – because what else did men of the time do with disobedient, outspoken women? You might expect it to be because he doesn’t agree with what she’s doing, because he has something of a conscience, but no, it’s much worse: he’s bored. Bored with her trivial plans, when he imagined them doing grander things befitting their immortality.

There is, in Reeve Carney’s dismissive sneer, a kernel of one intriguing notion Penny Dreadful’s third season has started to drive towards – the way that women can be perceived by men as something that defines them, enabling them to create a legacy for themselves. What Dorian’s exact vision was we may never know, but Dracula is just as besotted with the idea of ruling the darkness alongside Vanessa as he is with the lady herself. As Eva Green swoons into Dracula’s arms once more, this time agreeing to be his in full awareness of who and what he is, you wonder whether she really means it. Is she faking just to get close enough to kill him? After all, Vanessa said during her time in the asylum that knowing the name of her predator was all she needed not to be afraid. A sense of fulfilled identity may be the end goal for these male characters, but it works both ways – and if Lily has found power in refusing to serve that role for the blokes around her, why would we expect anything less of Vanessa? We’ve seen how strong she can be, with or without Ethan her protector (again, another man defined by his relationship to a woman). Perhaps, then, the question is this: if Vanessa is just lying to Dracula (and we really hope she is), what if she decides to rule the darkness by herself instead?

Whatever happens in these next two episodes, this is sexy, stunning, gripping television.

Where can I buy or rent Penny Dreadful online in the UK?