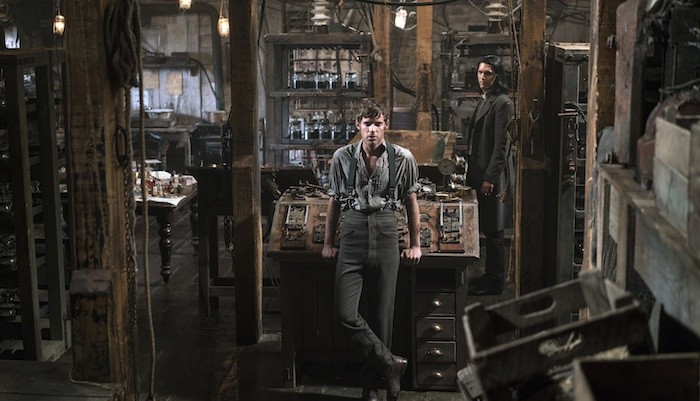 Three seasons in and Penny Dreadful still promises new ways to scare us.

“The old monsters have gone,” declares Vanessa Ives (Eva Green) at the start of Penny Dreadful’s third season. And well she might, after battling through two seasons of torment and inner turmoil. Green has been astonishing at every turn, physically contorting herself through possession and peril, but here, we get a reminder of just how good she is at being still.

After the thrilling chaos of Season 2’s climax, our heroes have scattered across the world. Sir Malcolm Murray (Timothy Dalton) and his moustache are off in Africa, burying Sembene. Ethan Chandler is in the custody of Inspector Rusk and being whisked back to New Mexico to pay for his hairy crimes. John Clare (Rory Kinnear) is, rather fittingly for Frankenstein’s monster, out in the snowy wilds. And so Vanessa is in her London home, alone, wandering the quiet halls. “The old curses have echoed to silence,” she continues. The silence really does strike you – where once the shadows of Murray’s house and Vanessa’s crucifix-laden bedroom were full of murmuring voices and sinister threats, now there’s barely a whisper. The building, it seems, is just a building.

Details like that remind you just how good Penny Dreadful’s production design is – in a world where TV budgets are forever increasing, Showtime and Sky’s Gothic horror remains right in the top tier of best-looking shows. Epic vistas in New Mexico and Africa are, as you’d expect, impressive to behold, but it’s telling that the interiors are just as beautiful. (Even when it’s relegated to the background, for example, Frankenstein’s lab remains as fascinating as ever to peer around.)

Praise should go especially to everyone’s favourite Egyptologist, Ferdinand Lyle (Simon Russell Beale), whose wig in itself deserves its own paragraph.

Lyle interrupts Vanessa’s peaceful isolation to sympathise with her lamenting – “My unique nature left me feeling low and loathsome…” he sighs – but also to jostle her out of her funk. Simon Russell Beale has lost none of his delightful eccentricity; him saying the word “ennui” is worth tuning in for alone.

Under Ferdinand’s advice, Vanessa goes to see a “mental doctor, of a sort” and talk through her problems. Between the ensuing day-lit conversation and Vanessa’s composed appearance, her first session couldn’t be a bigger contrast to the dishevelled, nocturnal horrors of episodes past. You almost can’t blame Miss Ives for seeming to conclude, on some level, that all of that nastiness was partly just a psychological problem.

But, of course, the supernatural soon rears its head, as she and Dr. Seward (Patti LuPone) trade verbal blows across a desk. LuPone is excellent as the formidable therapist, interrogating Miss Ives with a disarming understanding of her habits – but just as we think Vanessa’s been all sussed out, she hits back with her own psychic insights into the doctor. The whole episode could just be these two actresses having a conversation and it’d still be gripping. It helps that they’ve worked together before – indeed, LuPone’s casting raises no end of mysterious questions, after her superb turn as The Cut-Wife in Penny Dreadful’s Season 2 – par for the course in a show that specialises in the past and the present, memory and trauma, outcasts and connections.

How brilliant, then, that Seward’s family name links her explicitly to both The Cut-Wife (is this doctor a descendant?) and to a well-known novel of the period: Bram Stoker’s Dracula. Seward, in the original novel, examines Renfield, an underling of the count, who has all manner of disturbing habits. Sure enough, he turns up too (a wonderfully twitchy Samuel Barnett), although not having encountered the big bad vamp himself yet – as always, part of the fun of Penny Dreadful is in the way it weaves together its sources. With its entire episode set around the death of Tennyson, Episode 1 of Season 3 cements the programme as one of the small-screen’s most literary and witty shows; creator John Logan never name-drops without purpose, always toying with conventions and themes.

“This whole country is built on skeletons,” observes Rusk, voicing the kind of sentiment that Tennyson would have approved of. Indeed, each new face in our cast brings with it a wealth of history (and a closet full of bones). That’s never been truer than Season 3’s biggest debut star: Dr. Jekyll (Shazad Latif). Latif plays the acquaintance of Dr. Frankenstein with an arrogance and enthusiasm for knowledge – his presence visibly rejuvenates Harry Treadaway’s convincingly downtrodden Frankenstein. While he locks himself away, thinking of his lost Lily, we see flashbacks to Jekyll’s past, in which he’s bullied for his Indian heritage. Together, they’re outsiders, one of his own making, one of society’s doing, but, true to the series’ intelligent form, it’s something that’s left unsaid, looming in the background and promising bad things to come.

The result is an episode that broadens our horizons, but still manages to begin reuniting our ensemble once more. Malcolm’s path seems destined to cross with that of Ethan, while a brief glimpse of Sarah Greene’s Hecate makes it clear that she will have a part to play too. All that’s left is to catch up with Lily and Dorian Gray. The latter’s absence is made up for, though, with the discovery of a new romantic interest for Vanessa: Alexander Sweet, the curator (Christian Camargo) of a museum that looks an awful lot like Holborn’s Hunterian, a place stacked with ghastly specimens and morbid jars. Only in Penny Dreadful can cute flirting take place in front of a dead scorpion.

Green, as ever, delivers a masterclass in acting without saying much – taking us right back to the unspoken tableau of her in Murray’s sparse residence. “Something remains. I remain,” she concludes, a stirring speech of empowerment, fortitude, identity and, most of all, hope. A sinister final shot, though, warns us that all of those things won’t last for long. The old monsters may have gone, but three seasons in, Penny Dreadful still promises new ways to scare us.

Where can I buy or rent Penny Dreadful online in the UK?

– Who exactly is Malcolm Murray’s new Native American friend, who is so keen to help Ethan? And how will this all – detectives, Hecate included – link up to his father? And does anyone have a VHS copy of The Wolf Man we can borrow?

– How lovely that Sembene gets a proper send-off – he’ll be sorely missed this season.

– If you’ve created an undead wife for yourself, who’s then gone rogue and mildly homicidal, do you a. Try to kill her, or b. Try to trap her and tame her? Jekyll convincing Frankenstein to do the latter is one of the stupidest decisions ever made by an on-screen scientist.

– Finally, finally – ever since that first mention of Mina in Season 1, Penny Dreadful wheels out the big fangs with the unveiling of Dracula himself. It’s par for the course that we don’t see him, only hearing his voice, and that only makes his appearance all the more chilling: Damon Thomas (a veteran of BBC’s excellent In the Flesh) saves his best direction for this sequence, as a host of shadowy undead gather in a moodily lit warehouse – and the terror of what’s off-screen is written plainly on Barnett’s wide-eyed mask of horror. Welcome back, Penny Dreadful. Welcome back.

Brits to spend more on VOD than DVD this year

You can now control how much mobile data Netflix uses