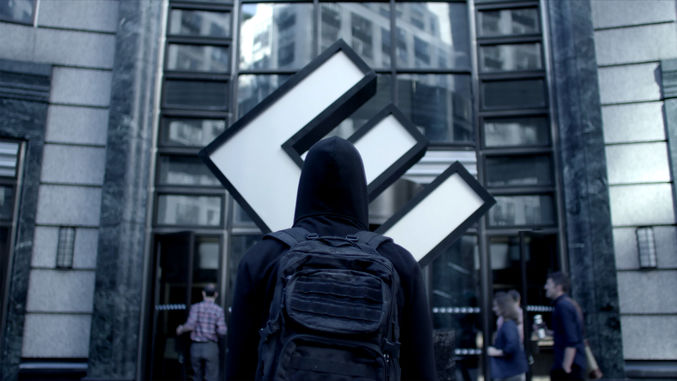 Mr. Robot is a show driven by and defined by its central character (or central characters, if you will). Season 2 blew up that scale, only for Season 3’s opener to boil it back down again to a single question of identity and intention. That episode made it clear that Mr. Robot (Christian Slater) and Elliot (Rami Malek) have never been further apart, as they pull our protagonist in opposite directions: one trying to stop the whole Phase 2, the other trying to keep it going. The episode’s closing cliffhanger revealed that Angela (Portia Doubleday) isn’t Elliot’s ally after all, and that she’s working with Mr. Robot and Whiterose (BD Wong) to thwart his clean-up attempts.

With the plot lines clearly drawn, Episode 2’s job is to colour it in with the rest of the expanding ensemble and tackle all manner of questions, themes and strands. It’s a risky balance, but Sam Esmail doesn’t put a foot wrong.

The show’s creator starts by swiftly getting rid of an entire subplot: Joanna Wellick. Played with terrifying ruthlessness by Stephenie Corneliussen, she has nonetheless always been one of the weaker parts of the series, with Season 2 sidelining her role to the point where it felt irrelevant. Rather than try to continue that balancing act, Season 3 smartly axes her altogether: after going on a talk show to profess her love for Tyrell, her former lover bumps her off, in a bloody scene that thankfully (for multiple reasons) doesn’t spend screen-time dwelling on the aftermath.

After an uneven sophomore run, it’s a confident message to the audience that Mr. Robot knows where it’s going this season. That applies most impressively of all to Evil Corp’s in-house ham generating machine, Phillip Price. Played, as always, with relish by Michael Cristofer, he’s a suitably over-the-top villain who has occasionally crossed the line into silliness, particularly when Esmail’s scripts have leaned heavily on the politics. But here, he’s more intimidating than ever, as that political grand-standing has seen him and the company stay afloat in a challenging economic time: we first see him again addressing the entire UN, calling for China to get on board with Ecoin, Evil Corp’s equivalent of Bitcoin that Price is keen to secure as the currency of the future.

As Zhang, aka. Whiterose’s political alter-ego, pressurises Price to get a UN vote in exchange that will allow China to annex the Congo, we discover that the hacker is planning to get Phase 2 underway, regardless of how things turns out – just to teach Price that he can’t always win. It’s a masterstroke of writing, reducing this whole global crisis down to a tiff between two men afraid of backing down to the other: Fsociety’s hack isn’t an outsider game at all, but the by-product of an argument between two of the most powerful corporate figures in the world.

It’s the same approach that is shaping Mr. Robot and Elliot’s struggle, as the show continues to anchor everything else in their alternating personalities and motives. Mr. Robot only appears briefly, but whether it’s Slater or Malek acting the grinning, glinting role, it’s always clear when he’s in control, as he scarily intimidates Darlene and rudely lectures Krista during a therapy session – a demonstration of just how different the duo have become (and not only because Elliot can’t remember these exchanges).

Yes, we’re back at Krista’s for therapy, and those sessions are now feeding into this central dislocation: Elliot is doing his best to stay focused and un-triggered (Darlene, he correctly decides, tends to cause Mr. Robot to appear), but as a result of only engaging with half of his identity, Elliot feels empty and sad inside. It’s a moving aspect to Elliot’s torn feelings, as he wants to both embrace Mr. Robot (after Krista’s bullying, Elliot feels alive again, but can’t tell why) and silence him. That added emotional nuance gives Malek more material to explore, plus it stops Season 3 feeling like a retread of Season 2 territory.

It’s beautifully captured in a bravura opening montage, as Elliot gets an entry-level coding job at Evil Corp and works his way up the chain high enough to stop the paper back-ups of all the banking records that Whiterose’s Phase 2 wants to destroy. Elliot goes to work, goes home from work, holds meetings, hacks corrupt senior figures to fire them and get better meetings, and simply doesn’t stop: he takes his prescription pills, he keeps his head down, and he rides the elevator like a normal person. Esmail has always had an eye for a montage, and the editing is sublime here, simultaneously showing us progress (Elliot does get a meeting with a mid-manager who agrees with him) while also showing us a lack of it (walking emojis on the train are a brilliantly surreal depiction of how hampered his mental state is by the drugs he’s on).

There’s also a strong tradition of routine in Mr. Robot that helps to shape Elliot’s day and personality – and Elliot, tellingly, enjoys that sense of normality. But as the FBI pressurise Darlene into bugging her brother’s computer, and Mr. Robot finds out, that routine is dismantled, prompting him to break into Darlene’s house. We see him do it on CCTV, leaving it unclear whether Mr. Robot is Elliot is now in control. At its heart, this remains a show about witnessing that normality and trust being undermined. Three seasons in, and the destruction is as compelling as ever.

Season 3 of Mr. Robot is available to watch exclusively on Amazon Prime Video in the UK, with new episodes arriving every Thursday, within 24 hours of their US premiere. All 10 episodes of Season 1 and 2 are also available to stream, as part of a £5.99 monthly subscription – or, if you would also like free next-day delivery on Amazon products, as part of a £79 annual Amazon Prime membership.