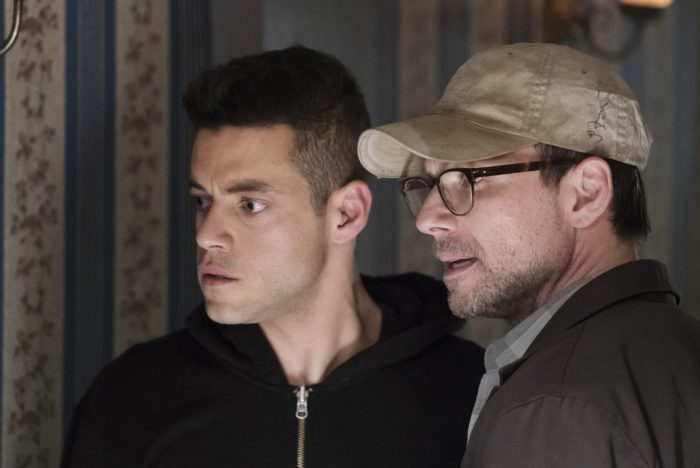 How wonderful that Mr. Robot is bold enough to be different. How disappointing that it doesn't always work.

This review contains spoilers. Not caught up with Mr. Robot Season 2 yet? Read our spoiler-free review of Episode 1 and 2.

Mr. Robot is a lot of things. It’s stylish. It’s unexpected. It’s ambitious. It’s a showcase for a brilliant cast. And it’s prone to prolonged bouts of self-indulgence. Episode 6 of Season 2, then, is the most Mr. Robot episode of Mr. Robot yet.

And yet, you might not even guess it’s Mr. Robot from the opening, which pitches us head-first into a 1980s sitcom. Why? Because that’s apparently what Elliot’s subconscious does when someone’s beating the crap out of him. Master/Slave sees him retreat into his own headspace like never before, as we watch him, Darlene, his dad and his mum all go on a family road trip, complete with cheesy music, titles and even a laugh track. At one point, ALF shows up. It’s like Too Many Cooks, if it were an actual TV show.

That’s the problem, of course: Too Many Cooks is a perfect idea, perfectly executed, but it doesn’t go on for more than a few minutes. Too Many Robots, on the other hand, doesn’t quite know when to stop.

That doesn’t stop it from being impressive, with its raft of details that echo the real world – Angela working for E Corp as a gas station employee, Tyrell being tied up in Mr. Robot’s car boot, and Gideon being killed once again. Rami Malek, meanwhile, is even more incredible, when you see his intense performance in the glaring Day-Glo light of a dated TV comedy; his frozen mask of fear and a forced smile is a wonderful juxtaposition with the canned laughter.

But it does stop it from succeeding completely, as the high-concept premise threatens to outstay its welcome. Once we work out what’s going on, we want to see its repercussions in the real world, and once we’ve seen that, it’s hard to buy into the logic behind him being punched back two decades into an old-school sitcom (Alf is playing on the TV? Really?). Compare it to the concrete hallucination from earlier in the season and there’s a distinct lack of consistency to Elliot’s subconscious, which niggles – and feels less like a masterful piece of writing and more an extravagant display of how clever the show can be.

The other half of the episode centres on Angela and Darlene (note that they’re now in the same story strand, as the series positions itself for the home stretch) and, while it might seem like a straightforward A-to-B subplot, this is where Mr. Robot really shows its smarts. We follow Angela as she takes on the task of hacking the FBI for Fsociety, repeating code instructions over and over again until she can do them by rote. By the time she’s moving between cubicles and typing in passwords, the show is in full Ocean’s 11 mode – and the too-cool-for-school music and Esmail’s subtle long takes are the kind of clever that can be easily overlooked.

Needless to say, things go wrong, as a pesky FBI agent spots her on the wrong floor, and the Wi-Fi suddenly drops out. Portia Doubleday is perfect for this kind of situation, able to put on her blank, ice queen face, while still being visibly nervous of being rumbled at any second. Her resilience and drive have never been more evident than when she switches into Flirting Mode to fend off the FBI agent, after Darlene’s failed attempts to hack him (noting he rings him mum an unusually high number of times and simulating a phone call from her is a great touch). Her face when she recognises Cisco as the audio CD guy from Season 1, meanwhile, is priceless – with him being set upon by the Dark Army’s goons, he’s surely not got long left.

Grace Gummer, meanwhile, continues to be one of the best things about the show as Dom, who has to fight her superiors to keep her case going – after last week’s shootout, she’s the only one who finds it weird that the Dark Army’s assassins ultimately turned their guns on themselves, “erasing their history”, as she puts it (one of the series’ clunkier moments of syncing the virtual and physical world). Scenes of her chatting to her local newsagent, whose business is about to go under due to the financial criss, are superb and heartfelt – the kind of moment that could be seen as slow or indulgent, but, tellingly, is far less of a drag than the ALF sequence.

That sequence does have a good pay-off, as we reach the moving realisation that Mr. Robot is less trying to control Elliot – hello to Ray and his heavy-handed monologue to a hospital-bound Elliot about dogs, slaves and how everyone needs a master – and more trying to protect Elliot from pain. They hug and, given that one’s crazy and the other doesn’t exist, it’s a surprisingly emotional conclusion, not least thanks to a cute flashback that sees Elliot’s dad comfort him, post-school bullying, and insist to Elliot that, despite his illness and new unemployment, the world won’t get rid of him that easily. He asks Elliot to name his new computer shop – a memory that we know is going to burn itself into his brain. It’s the collision between Dom and Angela, though, as we discover that she’s accidentally used DiPierro’s desk to finish her hack, that really has you on tenterhooks – a reminder that for all its flourishes and confidence, Mr. Robot is sometimes at its best when keeping things simple. After all, we’re nearing the final part of the season. And this ain’t no sitcom. The fact that it even dares to pretend to be, of course, is admirable, and epitomises the appeal of Sam Esmail’s show in a nutshell. How wonderful that Mr. Robot is bold enough to be different. How disappointing that it doesn’t always work.

Season 2 of Mr. Robot is available to watch exclusively on Amazon Prime Video in the UK, with new episodes arriving every Thursday, within 24 hours of their US premiere. All 10 episodes of Season 1 are also available to stream, as part of a £5.99 monthly subscription – or, if you would also like free next-day delivery on Amazon products, as part of a £79 annual Amazon Prime membership.