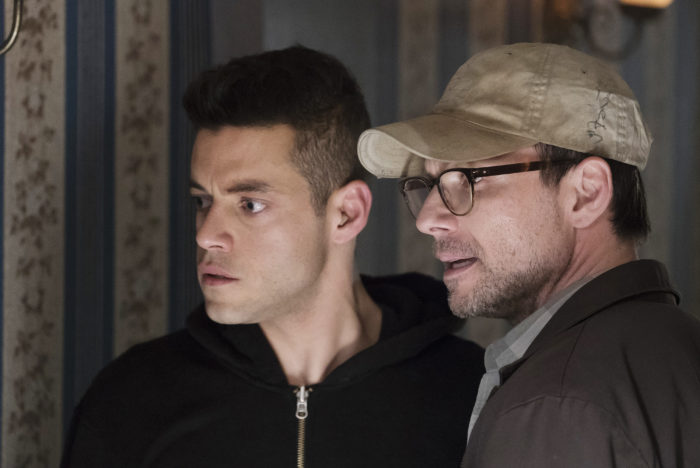 A strong, slick start for a show that has never seemed more confident.

“I am in control.” That’s Elliot at the start of Mr. Robot Season 2, as he retreats from the world to get his head straight. You wouldn’t be blamed for doing the same thing, following Season 1’s mind-boggling conclusion, which revealed Mr. Robot to be Elliot’s alter-ego – and then actually went ahead with Fsociety’s hack on EvilCorp.

Now, uncertainty and chaos is everywhere, and as the real world, one of Brexit votes and outlandish US Presidential candidates, has taught us, uncertainty is the enemy of civilisation.

And so we see EvilCorp racing to put out the fire of the hack – and, in one scene superbly soundtracked by Phil Collins, effectively start one of their own. Slowly but surely, the system seems to start pulling itself back together, with President Obama appearing on the news to condemn the hackers and EvilCorp CEO Phillip Price (Michael Cristofe) running to the authorities to beg for both another bailout and his job. Certainty is important, he tells them – or, at least, the illusion of it.

“Every day when the market bell rings, we con people into believing in something,” he declares. “The American Dream. Family values. Could be Freedom Fries for all I care. It doesn’t matter as long as the con works and people buy and sell whatever it is we want them to.”

Michael Cristofe delivers his grand speech with a Donald Sutherland-esque grin. “If I resign, then any scrap of confidence the public is already clinging on to will be destroyed. And we all know a con doesn’t work without the con-fidence.” Cristofe’s relish for each syllable can’t quite shake the niggling feeling that Mr. Robot, for all its stylish flourishes, sometimes feels like something written by a university student, just after watching The Hunger Games and realising that capitalism ain’t all good.

After years of austerity in the UK, the show’s anti-corporate stance has rarely felt so topical, but that doesn’t necessarily make Mr. Robot all that radical or subversive – especially as creator Sam Esmail’s decision to hit pause on the overall narrative makes for something of an anticlimactic premiere.

But if Season 1 proved one thing, Esmail doesn’t do anything by mistake – the auteur’s level of control has reached such a degree that he’s now directing the whole of Season 2, meaning that everything is even more painstakingly crafted than before. Any anticlimax, then, only reflects the broader theme of the show: that what comes after a rebellion is not guaranteed to be any better, or even any different (cf. The Hunger Games). We see the aftermath of the hack at every level – not just as EvilCorp try to get things back to normal, but as customers try to access their accounts, only to be denied; people’s debts have, in theory, been erased, but it’s not just a case of hacking servers; the whole system has to be changed.

It’s a comedown for Fsociety, who were, the last time we saw them, dancing and celebrating their victory. When we see Darlene (Carly Chaikin), now leading the group, her heavy-hanging shoulders look more like the pose of someone who’s just been beaten, not the other way around. By the time we see them take action against EvilCorp’s Susan Jacobs, hacking her smart home, Esmail presents the attack with sinister threat as much as dark humour – we almost feel sorry for her, as if she’s a victim and Fsociety are the bad guys.

We even get introduced the wonderful Grace Gummer as an FBI agent investigating the attack – a sign of just how far removed we are now from the first season’s limited perspective. Before now, we’ve only seen the world of Mr. Robot from Elliot’s warped POV. Now, we can move away from him to spend time with other people, other sides of the fence. EvilCorp, tellingly, gets consistently referred to by its actual name, “E Corp”, for the first time. Shades of grey abound.

Our main window into E Corp? That’s still Angela (Portia Doubleday), after she took the surprise PR job at the company. Now, though, it’s sunk her hooks into her – she, like us, can see the company not as a remote entity but an office, full of human employees. Angela seems to be happy there, but a glimpse of her listening to self-belief tapes suggests otherwise. “I recognise myself as exceptional,” she tells herself at night. “I am confident.” There’s that word again – is the firm tricking her? Or is she tricking herself? Doubleday’s ability to look scared and aggressive at the same time is on fine form.

And what of Elliot? While we’re venturing outside of his head, he’s withdrawing further into it. Scared of what his alter-ego is capable of, he constructs a routine to keep his mind in order: living with his mum, he has breakfast with Leon (rapper Joey Badass), does some cleaning, has lunch with Leon, watches some basketball, has dinner with Leon, and does some more cleaning. It’s a stunning montage of repetition, all accompanied by Lupe Fiasco’s Daydreamin’ – Mr. Robot has lost none of its ear for a catchy, iconic soundtrack. Even the conversations Elliot has with Leon are the same exchange over and over again: Elliot staying silent, as Badass’ amusingly eccentric sidekick waxes lyrical about Seinfeld in meta-physical detail.

Rami Malek is incredible in his role, managing to be equally mesmerising, whether his face is moving, laughing or just staying completely still. He’s matched by Esmail’s skilled presentation: these two episodes are a beautiful piece of story-telling, with Elliot’s analogue lifestyle quietly carrying traces of being trapped – a visit from Gideon (Michel Gill) sees the pair stick firmly to either side of a table, like it’s visiting time in jail. More than ever, this is a narrative form that’s driven by its character. It makes sense, then, that Mr. Robot is at its best not when it’s doing Economics 101, but when it’s analysing its own lead: Season 2 is closer to ITV’s excellent River in its dealing with psychological issues through the format of more conventional genre (in this case, a cyber-thriller). It’s testament to the show’s quality that even with Mr. Robot revealed as a figment of Elliot’s imagination, Christian Slater still plays a direct role in the tale – and still feels relevant. It’s not only good news for Slater’s agent, but good news for us, as it means that no dramatic tension has been lost; Mr. Robot remains a fascinating study of mental illness.

“How do I take off a mask when it stops being a mask?” Elliot asks himself, a few words that carry oodles more weight than Price’s earlier, on-the-nose monologue. The mystery of where Tyrell Wellick is looms large, but most of all, we wonder: is Elliot really in charge? As long as Esmail keeps such tight control of this series, it’s a question that’ll keep us logging back in for more. This is a strong, slick start for a show that has never seemed more confident.

Season 2 of Mr. Robot is available to watch exclusively on Amazon Prime Video in the UK, with new episodes arriving every Thursday, within 24 hours of their US premiere. All 10 episodes of Season 1 are also available to stream, as part of a £5.99 monthly subscription – or, if you would also like free next-day delivery on Amazon products, as part of a £79 annual Amazon Prime membership.

Spoilers and other notes

– Let’s just all take a minute to applaud the sequence in which E Corp’s Scott has to burn those 5 million dollars in public – Mr. Robot surely has some of the best editing on TV right now.

– If you wondered what Joanna Wellick would do next, we bet getting herself tied up to a bed to play kinky games wasn’t at the top of your list. But what was that parcel that arrived for her in the post? Whatever it means, she certainly wasn’t surprised by it and seemed to know exactly what to do with it. Whose side is she on? Watch out for her to become more and more important.

– If we’re getting more Joanna for our money, it’s sad that we’ll get less Gideon – a moment of silence, please, to mourn the passing of the series’ only true good guy; the kind, clueless schmuck left carrying the can. Is it Fsociety’s fault? Is it Elliot’s fault? The sight of Mr. Robot cutting his neck open at Elliot’s kitchen table strongly foreshadows the shooting of Gideon in the bar – and, as we noted above, this isn’t a show that believes in coincidences. If Mr. Robot did order the killing of Gideon, somehow, could that be the final straw to push Elliot away from Fsociety? It’s going to be a bumpy ride in that head of his.

– Speaking of which, after several showdowns, Elliot seems to be getting the upper hand of Mr. Robot, after laughing him out of the room – “Peace” – and waking up to find a phone in his hand, connecting him to Tyrell Wellick. That’s what he’s been demanding from Mr. Robot all along, but a flashback to the missing three days of Elliot’s life at the end of Season 1 show him reaching into the popcorn in Fsociety’s base, while they execute the hack. The popcorn, don’t forget, has a gun in it. Is Tyrell already dead? Did Elliot shoot him and just can’t remember? If so, what’s with the voice on the phone?

– OPENFILE_Theories.exe – spoilers? There are some interesting theories going around the web about Elliot’s life right now – but it’s certain that all is not what it seems. Just look at Ray (Craig Robinson), who seems to indicate that they spoke the night before seeing each other in the park, which suggests that Elliot’s control is just an illusion. But what else isn’t real? With the prison theme firmly booted up – his repetitive routine, his dinners in the canteen-like cafeteria, his therapy session, his strict either-side-of-the-table visit from Gideon – is it possible that Elliot’s actually behind bars at the start of the season? Or in a psychiatric institution? Has he been arrested? Or has he checked himself in? Answers on a postcard below. 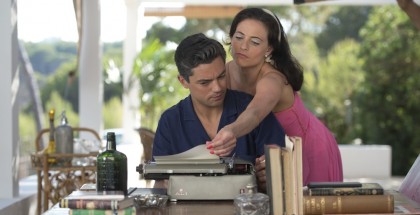 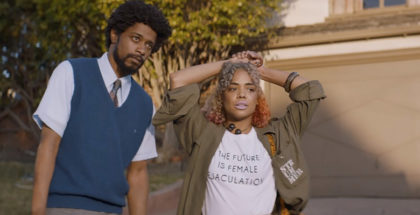 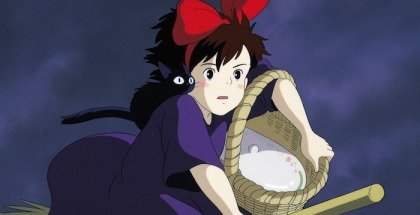 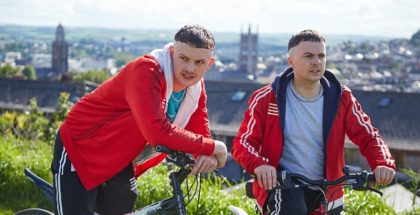