UK TV review: Motherland Season 2 | Where to watch online in UK | How to stream legally | When it is available on digital | VODzilla.co

This frank, funny sitcom about parenting is brilliantly written and performed.

Kids. First they take up all your time and then they go to school and things get even more stressful. That’s the frank take on parenthood that underpins Motherland, BBC Two’s painfully hilarious – and hilariously painful – comedy about being a mother in modern society. Happiness, cute cuddles and peaceful quality time? That’s all covered in other TV shows, so Motherland leaves it out entirely, focusing instead on the awkwardness and stress that goes not only with looking after sprogs, but also (and more importantly) with trying to fit in with other mums in your area.

That mix of social pressure, exhaustion and the weight of expectations that everything should come naturally and easily made Motherland’s first season a bracing, brilliant cocktail that balanced laughs with rare honesty. Season 2 is another hit of that same bitter drink, each hard-to-swallow note going down smoothly thanks to the razor-sharp script.

That nicely honed ensemble is deliberately thrown out of kilter by the arrival of a new mum outside the school gates: Meg, a high-flying businesswoman who juggles multiple children and a silver fox husbad (Anthony Head) with a social life, going to the gym and making early-morning conference calls to Mexico. Tanya Moodie is glorious as the larger-than-life mum, who is boisterous and confident – everything that Julia isn’t. The laugh-out-loud opening episode sees them all go out for drinks, and the evening spirals into chaos in a way that makes it clear Meg is struggling just as much as anyone – holding things together, but barely, while loudly telling everyone that she’s got it covered.

And so, when Julia tries to follow her example and start working for herself, things are destined to fail even more than usual, and Motherland’s superb wit lies in the way that it never shies away from the difficulties of just getting through one day. Even an encounter with a freelancer in a cafe takes a hysterically uncomfortable turn, as Julia’s desire to appear successful and important drives her to take advantage of a rare display of kindness. Amanda’s efforts to open her own shop – sorry, store – are similarly doomed (albeit for different reasons), but Punch’s committed turn ensures we don’t feel too sorry for her. The less said about Kevin’s career with kids, and his attempts to write a picture book, the better; Ready is even more of an endearingly wet blanket than ever.

Morgan, meanwhile, holds it all together with flawless comic timing and a relatable anger at the gentrification of her neighbourhood – including the loss of her favourite kebab shop. She increasingly emerges as the heart of the show, the only character who doesn’t place pressures and expectations on Julia, accepting everyone as she sees them. That subtle warmth and acceptance means that, even as Julia finds new ways to be excrutiatingly terrible, we’re still on her side as a new school year begins. Underpinned by keen observations facing women today – from unreleastic employment demands to the women’s load of domestic duties – Motherland’s second season cements its ability to balance sympathy, scathing honesty and side-splitting humour. This brilliantly written and performed show could run for many more seasons to come.

Motherland: Season 1 and 2 is available on Netflix UK, as part of an £9.99 monthly subscription. It is also available on BBC iPlayer until 31st May 2021.

YouTube debuts new series from The School of Life

Why you should catch up with Motherland November 7, 2017 | Ivan Radford 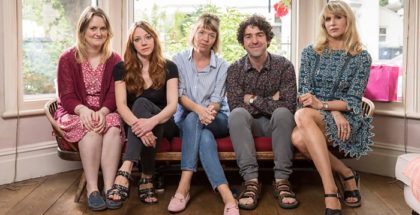