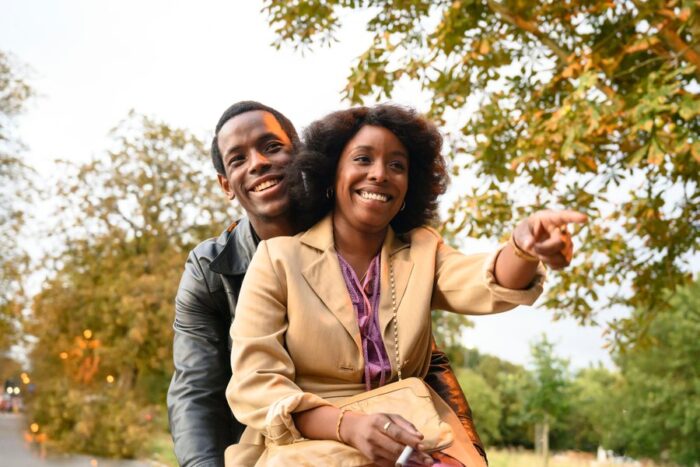 Steve McQueen's anthology hits a musical high with this euphoric, energetic celebration of life and love.

Steve McQueen’s Small Axe immediately became essential viewing with its first entry, Mangrove, a vital, thrilling courtroom drama that tackled social unrest and police violence as well as the institutional racism baked into the justice system. If that film impressed by exploring its subjects with simultaneous heft and a lightness of touch, Lovers Rock drifts along like a cool breeze.

The story begins as we see people preparing for a blues party one Saturday night. Speakers are set up in an empty living room. Dresses are picked out from wardrobes. Food is prepared to serve in the kitchen. And, somewhere across town, Martha (Amarah-Jae St Aubyn) and Patty (Shaniqua Okwok) sneak out for a night of dancing – and maybe, if the music is right, dancing with somebody else.

That’s essentially the entire plot of the episode, as Martha crossed paths with Franklyn (Micheal Ward), a flirtatious young man, and they hook up. Other guests are less fortunate in their connections, including one dark instance of an unwanted advance, but the focus here is more on the unity and support that rises up in the face of such nasty obstacles; while only an hour long, Lovers Rock is an entirely immersive piece of storytelling. Police and hostility linger in the background of the neighbourhood streets, but they tellingly never get near the front door, and Lovers Rock draws its inspiring power from what it chooses to exclude – or, more accurately, what briefly, for a few blissful hours, becomes irrelevant and forgotten.

McQueen and Courttia Newland’s script is packed with tiny details and observations, from the code-switching of Franklyn as he speaks to his white employer to the man carrying a cross who passes Martha at the start and end of her evening. But what’s remarkable about this spiritual outpouring of euphoria, which binds everyone else together for a sacred shared moment, is that all of these touches are almost entirely unspoken; this is a visual feast, one that plunges us right into this celebration of community and romance through sheer physicality and proximity. That this episode arrives in the middle of a pandemic that prohibits both of those things only adds to the vibrant, inviting display, as hands excitedly stretch out to find hopefully accepting arms.

McQueen has previously always worked with cinematographer Sean Bobbitt, his work defined by a clinical, remarkably precise composition. For Lovers Rock, he abandons that style completely, and finds the perfect match in rising DoP star Shabier Kirchner, who works on all five of Small Axe’s episodes. Kirchner builds on his lyrical, naturalistic work in Only You and Skate Kitchen to develop something astonishing here, his camera orbiting and then riding the wave of the party with all its undulating bodies and pulsating rhythms.

It’s a breathlessly unforced style that floats with the crowd’s evolving mood. The groove, though, stays the same, and Chris Dickens’ editing keeps every body somehow moving in time with whatever track is playing, even as each person moves at their own pace. And so, when the music cuts out in the middle of Janet Kay’s Silly Games, the group respond by singing the rest of it a capella without missing a beat – perhaps the most beautiful scene you’ll see on screen this year.

That carries us right into the next mesmerising set piece, as the men join together in their own outburst of energy, a percussive, expressive sequence that’s intense but not intimidating; replaying the episode after the end credits, it’s hard to recall another time when a gathering of Black characters have been presented on screen so unburdened from negative stereotypes, prejudiced perceptions or societal tensions imposing upon the narrative. This is a tender story of joy and love, fuelled by music and a freedom to be oneself. The result is a universal ode to the simple pleasure of a house party, while also normalising a positive aspect of Black life and culture that’s rarely celebrated on our TV screens. And yet it’s testament to Lovers Rock that you won’t be thinking about just how groundbreaking and technically accomplished it is; whether it’s Kung Fu Fighting or Hey There Lonely Girl, you’ll be too busy dancing along to one of the best playlists of your life.

Lovers Rock is available on BBC iPlayer until November 2021.