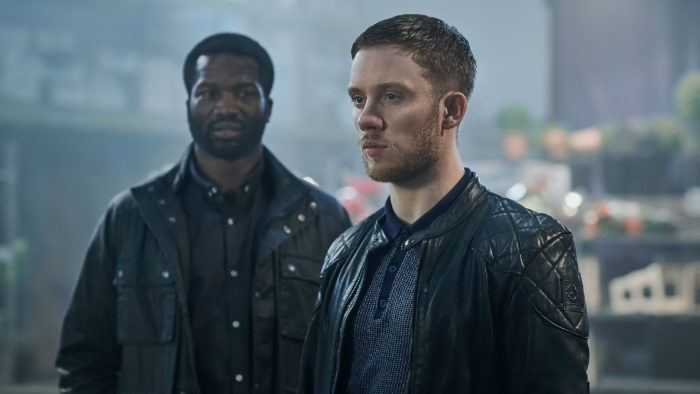 There are action films and there are action films, and then there’s The Raid. Now, there’s an action TV show from director Gareth Evans, which does for the small screen what his 2011 flick did for fridges, filing cabinets and anything else you could possibly turn into a weapon.

The series begins with a statement of intent – not just a 90-minute feature-length episode, but someone hanging high above the UK capital, turning the whole screen upside down. You never quite feel on solid ground from that point on, as Evans deliberately avoids the usual landmark-filled portrait of London, immersing us in a dark, gritty but undoubtedly slick underworld. It’s the best on-screen depiction of London since Eran Creevy’s Hong Kong-style epic Welcome to the Punch, bringing a cinematic sheen and blockbuster kudos to a place more typically associated with Richard Curtis films.

Evans populates his world with a vibrant tapestry of gangland life, one that feels big enough to expand far beyond the edge of the frame. Our window into it is Sean Wallace (Joe Cole), who finds himself stepping up to take the lead of London’s leading crime family, after a messy assassination job took out his dad, Finn (Colm Meaney). Who ordered the hit? Sean places the city on lockdown until he finds out, immediately ruffling the feathers of the other families around him.

It’s a veritable cauldron of simmering tensions, from the Dumani family – headed up by Ed (Lucian Msamati) – to Sean’s own mum, Marian, played with a steely, brooding authority by Michelle Fairley.

Joe Cole, who departed Peaky Blinders some time ago, swaggers through the scene with a wonderfully understated bravado – he’s got grit to spare, and his father’s short temper, but also proves a stoic centre for the action that unfolds, a calm, quietly vulnerable landmine amid the brewing storm.

That calm is shattered, though, when lowlife chancer Elliot (Sope Dirisu) enters the fray. He’s got his own reasons to want to impress Sean, but impress him he does, as he goes the extra mile to help track down Finn’s killer. We see that extra mile literally as a pub fight erupts into an on-foot chase, and Dirisu’s dextrous physical presence becomes shockingly apparent.

Evans, teaming up with choreographer and creative partner Matt Flanner (also of The Raid), turns what could be a bog-standard pursuit sequence into a breathtakingly nasty set piece. Bricks, steps, darts and even the pavement are weaponised in efficient but chaotic fashion, as Ed sprints after his quarry – and, as he clambers over a wall into an alley, the camera does the exact same thing behind him, without missing a beat. The pace doesn’t let up from there, pummelling through to a council estate and, eventually, climaxing in a fight with a cleaver that’s brutally gasp-inducing. Chucking the viewer any which way they please, ducking, swinging and leaning with each blow, it’s a dizzying ride that normally belongs on the big screen – and, even then, doesn’t come along very often.

here are signs of nuance and depth here – Msamati’s Ed is an outsider in British society in much the same way Meaney’s Irish mobster once was – and a twisting plot that, given the right amount of canvas to stretch out, holds more promise than The Raid 2’s bloated move into gangster epic territory. Lean and mean, even after its 90-minute opener, the result is a unique slice of small-screen action that dares to think big, a mix of The Godfather and Peaky Blinders that carves out its own identity away from each – in the bloodiest fashion imaginable. If this is what a Gareth Evans show looks like, it’ll be criminal to miss what just might be the most adrenaline-fuelled TV series of the year.

Gangs of London is available on Sky Atlantic from 9pm on Wednesday 23rd April, with the whole box set on-demand. Don’t have Sky? You can also stream it live and on-demand legally on NOW TV, for £8.99 a month, with no contract and a 7-day free trial. (An Entertainment Pass auto-renews at £8.99 a month until 1st September 2020, £9.99 thereafter unless cancelled.)

Rick and Morty Season 4 set for 7th May premiere