UK TV review: Fear the Walking Dead, Episode 1 (spoiler-free) | Where to watch online in UK | How to stream legally | When it is available on digital | VODzilla.co

Already seen Episode 1? Read on at the bottom for spoilers.

Zombies. They’ve become an accepted part of the modern cultural landscape. Everyone’s used to them. At no point in The Walking Dead does one survivor to another, “So, zombies, eh? That’s a bit weird.” Perhaps one reason that conversation’s never taken place in AMC’s post-outbreak scenario – aside from the series’ avoidance of the Z-word – is because it’s a laughable thing to say. Nobody wants to be the first mad idiot to cry undead wolf. But someone had to be.

Enter Fear the Walking Dead, AMC’s new prequel series, which takes us back to that moment when the zombie virus first broke out in Los Angeles. A grim prologue, which sees a guy wake up in an abandoned church, surrounded by dead bodies and blood, reveals that the end of days is already upon us, but also makes it clear that the show isn’t going to rush into the apocalypse: it’s too smart for that.

Our observer, Nick (Frank Dillane), is a junkie, who finds himself on the wrong side of a car bonnet all too easily. He’s far from a reliable witness, but his terror is plain to see, from his panicked run to his gritted teeth. The dread is believable. The dead? That’ll take some time.

As Nick raves about what he saw – much to the skeptical doctors’ concerns – his family gather around, from tough mother Madison (Kim Dickens) and blase sister Alicia (Alycia Debnam-Carey) to earnest step-dad Travis (Cliff Curtis). They’re far from a perfect unit – Travis, as his name wonderfully suggests, is hardly the cool father figure Nick or Alicia would like, while their mum is tired of trying to help her son kick his drugs habit – but instead of merely proving cliched, that bag of personal problems feeds into the rough-edged tone of the whole show: these aren’t characters to immediately sympathise with and they’re certainly not witnesses you’d trust to warn you about corpses coming to life.

Rather than immediately accepting the outbreak of walkers, or asking what humans should do next to survive, the script turns this opening episode into a more interesting question: Is Nick crazy? Dillane does dodgy well, even when strapped to a hospital bed, but director Adam Davidson (who’s helming the first three episodes of this series) builds this initial tale around that uncertainty: figures on the edge of the frame shuffle slowly towards us; an elderly man behind a curtain wheezes a little too often; a boy at Madison’s school brings a weapon to class, but not because of bullies.

It’s a masterclass in restraint, forever daring us to expect the worst, before undermining those assumptions. Even Calvin, a friend of Nick’s, who seems a fine, upstanding gentlemen, turns out to have a dark side, the spot-on performances adding to the unpredictability of it all.

The result is an impressively subtle introduction to this new take on Robert Kirkman’s universe: the sun-drenched location, with the thrum of buzzing city life, gives this world a distinctly different feel to the grey, empty one occupied by The Walking Dead’s Rick and co. But if that show has demonstrated the frustration of occasionally plotting things too slowly, the assured pacing of this opener is full of ominous threat. When the encounters do finally happen (one later sequence in the church is nailbitingly good), there’s no doubting the reality of what’s on-screen – and Davidson repeatedly pulls out and up from that horror to show us the civilisation waiting to collapse in the background. With only five more episodes to go, this is a promising start to what AMC has dubbed a “companion” piece to The Walking Dead. Already, this is a story that feels surprisingly unique but still retains that crucial element of fear. Suddenly, a spin-off series crying wolf doesn’t seem so mad after all.

Fear the Walking Dead airs on E4 weekly at 9pm from Sunday 12th August 2018, with episodes available on All 4 for free after their broadcast. Season 1 to 3 are also available on Amazon Prime Video, as part of a £5.99 monthly subscription.

– RIP Gloria, the patient zero of The Walking Dead universe. As far as we know, that is.

– “He’s not my friend and he’s not my brother.” Travis’ biological son, Chris, isn’t exactly a nice person, judging by the phone call he has with his dad while step-son Nick is in the hospital. Fear the Walking Dead does a great job of introducing the various emotional baggage carried by each character in the opening hour (Alicia, for example, and her lower-class boyfriend, Matt – can you say guaranteed victim?) but it’s the fact that they don’t all gel easily together that makes them a believable bunch.

– “We’re safer in numbers.” Shout out to Tobias, the school kid who spends too much time on the web and is apparently already aware of the zombie plague that is about to hit Los Angeles. It’s such a small act, his bringing a knife to school, but it’s a wonderfully creepy touch – and, of course, gives Madison a chance to demonstrate that she’s kind (covering for Tobias’ weapon) and also tough (confiscating it).

– The use of the mobile phone footage of the police trying (and failing) to shoot down a zombie is another nice touch through an everyday act: unlike a show such as The Strain, where the Internet is ignored because it stops the plot being believable, Fear the Walking Dead does well to integrate technology into its story-telling.

– Who had Calvin pegged as Nick’s dealer? And, more to the point, who thought Calvin would become a zombie too? Props to Keith Powers for a strong performance.

– Nick’s decision to shoot Calvin for self-preservation is an excellent climax for the first episode of Fear the Walking Dead, not only confirming that Nick is far from a model citizen, but also foregrounding the universe’s overriding preoccupation with what people are prepared to do to survive.

For more information, see Where can I watch Fear the Walking Dead in the UK?. 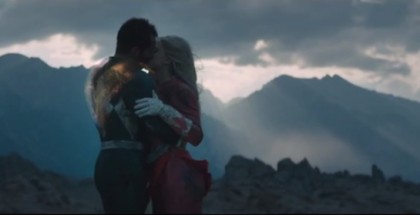