Netflix UK TV review: Fargo Season 2, Episodes 6 to 8 | Where to watch online in UK | How to stream legally | When it is available on digital | VODzilla.co 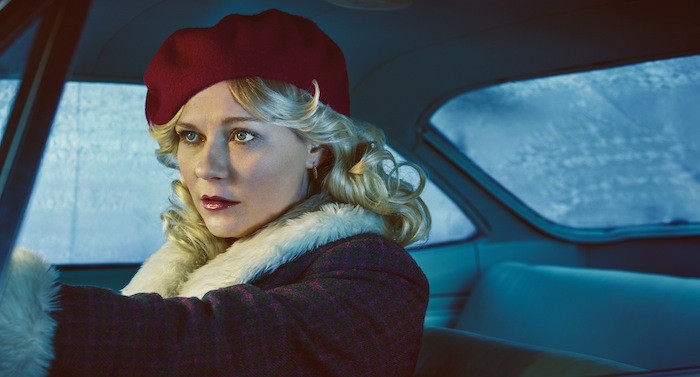 Back with a vengeance.

With the set-up episodes complete, Fargo gets right back to business in the second half of Season 2, stamping on the accelerator and reminding viewers exactly why they were so excited for the latest instalment of Noah Hawley’s take on the Coens’ universe.

Chaos. Fargo does chaos better than almost any other show currently airing, and those still watching are suitably rewarded after the previous, sensible episodes with a triumvirate fit to burst with it. Now all the major players have been established, Fargo can set about attempting to dethrone them – beginning with Ed and Peggy. Ed goes from humbly sitting in a cell, still refuting any accusation that he is involve with the Gierhardts, to making deals with mob enforcers and having a run-in with a noose. Peggy follows suit, finally revealing why she had such little interest in her marriage. It’s a subtle reveal that shows Peggy, not Ed, is the Lester Nygaard of Season 2, dreaming of something – anything – more than her current life. And she embraces it fantastically.

The Gierhardts, meanwhile, start to show why they’ve such faith in themselves, mounting guerrilla-style attacks on the organised crime syndicate without really solving any of their family issues – which somehow only paints them as more unpredictable than before. With Dodd in the care of Ed and Peggy, it’s left to Bear (whose name is only out-masculined by that of the actor portraying him: Angus Sampson) to fight back, and he does so in style. Floyd Gierhardt (Jean Smart), who appears to survey the war quietly, like a game of chess, is forced to make a sacrifice unexpected of her clan, though not one that is likely to go as smoothly as the authorities hope. Smart is an excellent asset to the series, her caring brand of threats adding a new angle to the multitude of dangerous characters on the show.

Still the crown jewel of the season, Bokeem Woodbine’s Mike Milligan is appearing to lose his grip on the situation in the eyes of his superiors. Nothing a good speech and a concealed pistol can’t fix, though – Mike’s real highlight comes in the form of a friendly telephone call from one Ed Blumquist.

Weaving most of the chaos throughout these episodes is Zahn McClarnon’s ‘Hanzee the Indian’. As we see further into his character’s drive, it becomes very, very clear that he may well be the most threatening character in this unfortunate world. A small detour from his search for Dodd results in a little tequila and a lot of bodies, and a moment of thought in Episode 8 gives his character a third dimension that only bolsters interest.

Hurtling towards the finish line, viewers will be hopeful to see where the chips land, especially for Wilson and Danson’s troopers, who manage to hold their own facing an array of likable bad guys. Episodes 6, 7 and 8 represent Fargo descending into undeniable wartime. The tension is high, the locations are as beautiful as ever, and the writing puts a focus on the characters’ motives rather than their actions. It’s very, very accomplished television.

Season 1 and 2 of Fargo are available to watch online on Netflix UK, as part of an £9.99 monthly subscription. Head this way for a review of Fargo Season 1.

– Hanzee’s search for Ed is certainly a worthy focus of these three episodes, and the conclusion to his search is even better. His loyalty to his heritage trumps his loyalty to Dodd, it seems, but where does this leave the Gierhardt clan? Scattered and struggling, with Floyd making a deal and Bear protecting what’s left.

– Mike Milligan and his way with words, however, are little better off. Still hoping to catch Dodd, while dodging a bullet from his own people for killing his replacement (the mythical ‘Undertaker’ was less than a match for Mike and his cohorts), it’s Mike’s next move that could determine the final proceedings for everyone involved.

– Another minor additional note after these episodes: Nick Offerman’s aimlessly righteously lawyer is fantastic, especially when drunk. A final episode that involves him spewing virtuous, bearded gibberish at anyone who’ll listen would be more than satisfactory.

Amazon renews The Man in the High Castle for Season 2