UK TV review: Doctor Who Season 12, Episode 1 (Spyfall Part 1) | Where to watch online in UK | How to stream legally | When it is available on digital | VODzilla.co 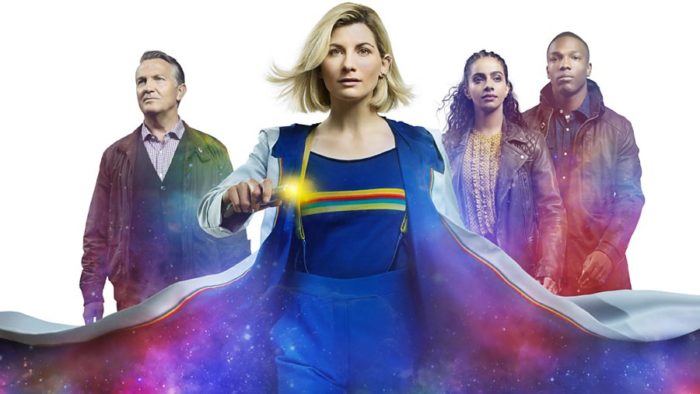 Jodie Whittaker's confident Doctor is back with a renewed focus, fresh stakes and an added dose of fun.

“The name’s Doctor. The Doctor.” That’s Jodie Whittaker’s Thirteenth Doctor at a swanky dinner party, returning for a new season with a statement of intent – not only is her new incarnation of the Time Lord not about to change anytime soon (she’s wearing a tux not a dress), but she knows exactly who she is.

Ever since Chris Chibnall took over the reins as showrunner, the Beeb’s long-running series has been met with a divisive response. While that’s perhaps partly, in some quarters, due to The Doctor’s regeneration from a Time Lord to a Time Lady, it’s also due to Chibnall’s change in style and tone, opting for slower episodes, more low-key storylines, a higher-than-average number of companions and, as a result, an occasionally underwhelming sense of stakes and uneven pace.

But to dwell on such mild missteps is to miss what makes Whittaker’s turn in the TARDIS so exhilarating and interesting. Her version of The Doctor, after years of presumptuously clever men, is unassuming, able to make mistakes and, most of all, very easily underestimated: The Doctor in her current form (interacting casually in slang rather than reciting show-off monologues) spends her efforts less combatting individual enemies and more facing down wider systems of inequality, cruelty or indifference, finding strength in the ability to step passively aside and let others save the day, make the right choice or dictate their own futures. She’s a generous, hopeful, empowering figure – qualities that have always defined The Doctor, regardless of appearances.

Spyfall, which arrives a year after the last Doctor Who outing (Resolution), doubles down on all of those things, and sees Chibnall raise his game to match, finding the pitch-perfect balance between character and action: the hour-long opener of a two-part adventure, it barrels along at breakneck speed, serving up revelations, jokes and set pieces with swagger, style and that same excited smile.

We rejoin The Doctor as her fam – Bradley Walsh’s widower Graham, Tosin Cole’s uncertain Ryan and Mandip Gill’s fresh-faced policewoman – are rounded up by MI6 to save the day. Because alien attacks are happening around the world, wiping out agents, and with UNIT gone and Torchwood no more, The Doctor is the secret service’s sole port of call. Well, there’s disgruntled former agent O (Sacha Dhawan), but more on him later.

It doesn’t take long for things to go awry, and fortunately Stephen Fry is on hand as MI6 chief C to provide some blustering exposition. There’s also Lenny Henry involved somehow as Daniel Barton, the head of VOR, a search engine giant that, thanks to its prolific gathering of data, makes it a powerful force in a digital age.

Henry, as is often the case with comedians given guest-starring roles, is wonderfully understated as the enigmatic Barton, delivering blunt retorts and matter-of-fact asides in ways that could be threatening or simply slightly antisocial – he’s a prickly customer, one who knows he’s protected by something, even if that is just the money and authority of his own making.

Creepier still are the alien forces themselves, which appear like white, glowing cowboy silhouettes and can push through any solid object – and, in a neat touch, briefly absorb its texture and colour.

Director Jamie Magnus Stone balances those stylish flourishes with a globe-trotting panache, sticking with Resolution’s enjoyably oversized location titles. He isn’t afraid to lean into the 007-inspired plot, with a car chase, an airplane sequence and a computer hacking sequence all presented with a knowing charm and cinematic sheen. (The car chase, in particular, is a classic example of the show disguising its own budgetary limits.)

Even with such an action-packed episode, it’s a treat to see the TARDIS fam back together, and the cast immediately settle back into their roles with a slightly honed definition. Walsh and Whittaker remain a joy to see trade dialogue, but Yaz and Ryan feel more defined here, from Yaz’s career-based skills as an interviewer to Ryan’s compassionate determination. Also significant is that any temptation of a romance between them seems to be pushed aside in favour of Ryan wanting to get her sister’s number – a new dynamic to Doctor Who’s companions that promises more fertile possibilities.

And, in between them all, Sacha Dhawan quietly steals scenes as O. The star of The Boy With the Topknot was once rumoured to be in the running for The Doctor and it’s easy to see why here, as he brings a geekily enthusiastic quality to his former spook, a man who has always held an unwavering belief in, and knowledge of, extra-terrestrial life. He’s the kind of person we’ve seen many times before on the show, with a horde of information amassed about The Doctor based on newspaper scraps and fleeting near-encounters – and, like The Doctor herself, works as a character because he shouldn’t be underestimated.

Building up a cliffhanger that’s genuinely thrilling, this season opener is a bold, ambitious hour that declares its intentions – and identity – with a renewed sense of focus and an added dose of fun. The name’s The Doctor, and what a pleasure it is to have her back.

– OK. Hands up who saw that coming. No one? That’s testament not only to the tight lips of everyone involved in the production but also to Sacha Dhawan himself, whose ability to blend into the background while pulling strings is brilliant. But once O is revealed as The Master? Well, it’s one jaw-drop after another.

– Dhawan’s announcement of himself as The Master recalls John Simm’s incarnation (watch out for a Harold Saxon nod), as he delivers lines with a gleeful energy and total lack of remorse. But his Time Lord is all his own, from the eye rolls and the wide grin to the bursts of anger and hatred not to mention the smug sense of besting his old, respected rival. Throw in a gloriously silly bit involving a matchbox (tissue compression, natch) containing the real “O”, after The Master stole his identity, and you’ve got the best Master reveal since Derek Jacobi.

– The question that leaves us with is how exactly it’s possible for The Master to exist, after John Simm’s incarnations turned on Michelle Gomez’s Missy, following her redemptive arc. That left her supposedly without the ability to regenerate, but while it’s nothing new for The Master to cheat death, perhaps this new Master will be chronologically placed between Simm’s version and Missy?

– If that’s the big question Part 2 will have to answer, it also has the challenge of resolving Daniel Barton being 93% human, the mystery of the white silhouettes and how they are working with The Master (a la the Toclafane in The Sound Of Drums).

– With their cowboy-hat like outlines, the head of the aliens look a little like Cybermen (not to mention the electricity-heavy deaths). That would be an apt way to kick off a new season – perhaps Cybermen who come “from beyond” in another universe, somehow contacted by The Master? Or perhaps they’re just a ruse made up by The Master for other nefarious ends? Either way, how does Barton tie into everything? How will The Doctor’s fam get off the crashing plane without her? Where is this other world she’s been trapped in by The Master? And, more importantly, where can we get that Matt Smith-like bow tie The Doctor was wearing for Barton’s dinner party?

Doctor Who Classic most-watched on BritBox this Christmas 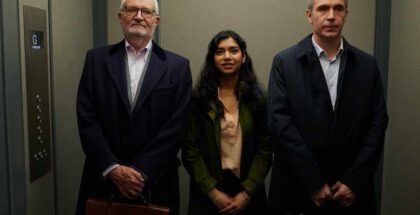