UK TV Review: Agent Carter Season 1, Episode 1 (Now Is Not The End) | Where to watch online in UK | How to stream legally | When it is available on digital | VODzilla.co

On the basis on this joyous opener, Agent Carter is going to be a belter.

Warning: This contains spoilers for Marvel movies up to and including Avengers: Age Of Ultron. Already seen Episode 1? Read on for some additional spoiler-filled analysis.

Even next to Norse gods and gun-toting raccoons, the most unexpected break-out star of the Marvel cinematic universe has been Agent Peggy Carter. Characters like Thor and the Guardians of the Galaxy have their names in the title and huge marketing campaigns behind their unlikely success, but Captain America’s best gal has transcended any notion of “love interest” status to become one of the most liked recurring characters.

Never mind that it wouldn’t have been likely that she’d return in movies after The First Avenger, which takes place 70 years earlier than the main timeline of the movies – Agent Coulson was in worse shape by the end of Avengers Assemble, but was still resurrected for Agents Of S.H.I.E.L.D. Peggy has appeared in the movies since, as a much older woman in Captain America: The Winter Soldier and, most recently, in a dream-fuelled flashback in Avengers: Age Of Ultron.

Now, with a 2013 One-Shot short film and flashbacks in Agents Of S.H.I.E.L.D serving as back-door pilots of sorts, Hayley Atwell has earned her own spin-off series, the period spy drama Agent Carter, with Captain America scribes Christopher Markus and Stephen McFeely running the show. On the basis of this pilot, it’s going to be a belter.

Picking up in New York in 1946, Peggy’s dance card is booked by Steve Rogers, who has just seemingly met his demise in the course of defeating Red Skull and ending the Second World War. Despite her invaluable contribution to the Strategic Scientific Reserve (the foundation of what would become S.H.I.E.L.D.) during the war, Peggy finds herself diminished by her chauvinistic co-workers and reduced to office tasks at the agency, rather than undertaking field work.

Her well-meaning flatmate, Colleen (Ashley Hinshaw), thinks she works at the phone company and tells her early on in this episode that there’s a difference between being an independent woman and a spinster. “Is it the shoes?” Peggy asks drily – up until now, we’ve seen her around men who valued her efforts, but in her isolation, everyone demands that she don an apron and settle down.

One of her much missed comrades, Howard Stark (Dominic Cooper), meanwhile, is in hot water for seemingly selling his advanced technological weapons to America’s enemies and is very close to going on the run to elude suspicious SSR operatives. The only person he can trust to clear his name is Peggy, so with no shortage of ulterior motive, he asks her to undertake this mission on his behalf.

With the help of Stark’s butler, Edwin Jarvis (James D’Arcy), Peggy investigates the burglary and fencing of one of the entrepreneur’s “bad babies” – projects that worked too well as weapons and thus were buried rather than marketed to the armed forces. The irony of turning traitor to clear Stark is not lost on her, but her covert return to the field quickly leads to the discovery of a world-changing threat.

As in any of her appearances as Peggy, Atwell’s performance is what makes this character so fascinating, with nerves of steel and a stoic and charming Britishness amid Americans – in one of the more delightful moments of the episode, her impeccable composure isn’t immune to an exclamation of “Crikey O’Reilly!”

But what really makes this a series to watch is the cast that has been built up around her. Atwell’s fledgling double act with D’Arcy, cast against his usual psychopathic type, is bubbly and platonic – Jarvis keeps trying to get out of late night assignments to get home to his wife and also seems hopelessly unprepared for the action that falls within Peggy’s particular set of skills. Dominic Cooper also reprises his Robert Downey Sr act as the elder Stark, though it seems his appearances may be more fleeting throughout the series.

They’re central in a company of stalwarts in the SSR office, including Chad Michael Murray as the chauvinistic Agent Jack Thompson, Shea Wigham as the taciturn Chief Dooley and Enver Gjokaj as Agent Sousa, an injured operative who has a little more sympathy for the squandering of Peggy’s talents. There are also guest appearances by Lynsey Fonseca as waitress Angie and Kevin Heffernan, who seems to have our hero’s bootprint all over his face from the second he pipes up to belittle her friend.

It’s a fine set-up for a show, with Peggy poised somewhere between June from A Matter Of Life & Death and Emma Peel from The Avengers (not that one), as the central mission statement of the season is set out. Furthermore, unlike the parent spin-off show, this one isn’t littered with 25 callbacks a minute, instead favouring a couple of story-led references to the series’ place in the larger Marvel continuity.

The period setting is handy in that regard – Iron Man won’t even be around for another 70 years, so he probably isn’t mentioned much in the writers’ room. Vita-rays and Roxxon Oil, an industrial force from the comics, get nods alongside a cameo from Anton Vanko (Ivan’s dad from Iron Man 2), but other than that, this feels like a launchpad for a whole new show.

It also helps that the period is immaculately recreated, making for a logical post-war extension of the fantastical, but grounded, 1940s setting we saw in The First Avenger. The pilot episode makes a tour of the settings you want to see from this kind of show, from the diner where Angie works to a swinging club where the stolen cargo is due to be fenced. The costumes are gorgeous too – for a TV budget, this is award-worthy production design.

At the centre of it all, Atwell makes a hugely charismatic lead, full of dry one-liners and unpredictable energy. She’s more likely to use a stapler to brain an opponent than to file paperwork and in setting up the banality of her post-war life before sending her into action again, the season opener is joyous. The episode title promises that Now Is Not The End, and on the strength of the episode itself, expect a great deal of cracking espionage and adventure over the next seven episodes.

– The club scene is wonderful and full of the kind of things that I could have gushed about for half of the review – in short, let’s go with the wig, the accent, the safe-cracking watch and just about everything else Peggy wears and does throughout that scene. That said, the pesky photographer might get her into trouble next week.

– The mute henchmen, with Y-shaped scars across their vocal chords, make for imperious baddies. Leet Brannis (James Frain) has the air of a Big Bad about him, escaping the climactic explosion, but the pilot does a great job of teasing who’s behind all this without giving too much away.

– It’s genuinely shocking when Colleen gets killed off. She could have easily occupied the role of Daredevil’s Foggy – someone who gradually becomes more aware of our hero’s dangerous after-hours activities and becomes a confidant. But the twist only underlines how alone Peggy is these days and it’s all the more heartbreaking for it.

– “I think that Miss Carter is the perfect choice, sir. I don’t think she’ll have any suspicions at all.” We know that Stark needs Peggy to clear his name, but the final scene makes it clear that he and Jarvis are withholding some information from her. It will be interesting to see whose side Jarvis is really on over the course of the series… 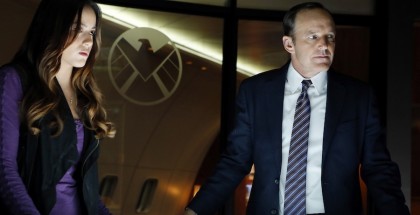