James Franco in a hat

Time travel and James Franco in a hat. What's not to like?

Don’t you hate it when your local diner has a time portal out back that dumps you in 1960? That’s the situation in which Jake Epping (James Franco) finds himself in 11.22.63. One minute, he’s a high-school teacher chatting to the restaurant owner, Al (Chris Cooper). The next, he’s 56 years in the past and has no idea what’s going on. On the plus side, he gets to wear a hat.

Of course, we do get an explanation in the feature-length opener of Hulu’s time-travel thriller, but it’s no coincidence that the series shows us (and Frank) the set-up first – because once put into words, it immediately becomes obvious how dumb the whole thing sounds.

Al, it turns out, has been aware of the time hole behind his cafe for a while now – and, in fact, has been using it to try and do one thing: stop the assassination of JFK on 22nd November, 1963. Do that, he reckons, and the Vietnam war wouldn’t have happened, saving tons of lives and improving his own. The problem? He’s not getting any younger and needs someone willing to take over.

Cooper does old, sick and grizzled as well as Chris Cooper does anything – very well. He’s a perfect choice for the part, able to spout absurd exposition and give it some level of gravitas. Franco is equally well cast, shrugging off any of his off-screen persona to deliver an understated performance, one that makes for a likeable, convincing everyman – he’s a washed-up teacher with little to live for, so why wouldn’t he jump at the chance to make a real difference to the world?

That’s the first hurdle for Bridget Carpenter’s adaptation of Stephen King’s 2011 book, and it’s not one that the writer entirely clears at the first attempt – because we only spend a short amount of time with Al and Jake, it’s hard to believe that he would take on such an insane, ambitious task, merely on Al’s say so. Over the ensuing seven episodes, his decision never gets much easier to swallow.

Where the series’ script does succeed, though, is in dismissing almost every time travel cliche we’ve been fed over the years. Here, there are only three rules: 1. No matter how long Jake stays in the past, only two minutes will have passed in the present, which he can return to via the diner. 2. The portal always takes him back to 21st October, 1960. 3. Every time he goes back, it resets any changes he’s made before.

It’s a refreshingly simple logic that underpins the universe, one that helps the silliness to seem slightly less silly. Even here, though, the approach backfires, because it’s hard to shake the suspicion that, no matter how bad things get, Jake can just jump in and out of the portal and start over.

A not-entirely-convincing lead character and an undermined sense of peril? It doesn’t seem like the strongest base upon which to build a high-concept thriller, but the show does get one crucial thing right: the past feels real. Painstakingly realised in every frame, director Kevin Macdonald (and a team that includes Fred Toye, Doctor Who’s James Strong and Franco himself) presents the era with confidence and panache, and the production team has a budget to match; the 1960s period is stunningly recreated, from the hair products and music to the suits and the apple pie. That vividly recreated world helps the show to overcome a lot of its problems, as we get a sense of just why Jake falls in love with the decade.

Once there, Franco fits in seamlessly, as if he’s been from the 1960s his whole life, nodding at women in the street, smiling with dazed nostalgia and cautiously following a lead like one of Hitchcock’s men-on-the-run. A meet-cute moment introduces us to Sadie Dunhill (Sarah Gadon) and sees him turn on the old-school Hollywood charm like a young Harrison Ford, leaving you waiting for her to make an appearance again – after all, with three whole years before Lee Harvey Oswald takes up his pivotal position in Dallas, we need something to pass the time. (The Indiana Jones charisma is back in full force when Jake snoops around a basement, muttering to himself. “There better not be any spiders in here…”)

Sure enough, Sadie becomes one of the series’ three lead characters. The other? Bill Turcotte, played by our own George MacKay, who falls in with Jake, after he tries to remedy the traumatic family history of one of his students from the future. Bill, whose role is expanded from the book, is a smart addition by Carpenter, turning what would have been exposition-stuffed narration on the page into dialogues on screen. It’s also par for the course in an adaptation that presents the overall dilemma of changing history through Jake’s small interactions with the everyday lives around him – the relationships he forms with his landlady and her family, or the bond he shares with student Harry Dunning (Leon Rippy) before deciding to travel back.

His relationship with Sadie, therefore, becomes the heart of the whole story, representing the pull of the past, but also giving events an emotional weight and intrigue. Bill, too, is a constant reminder that these are real lives that Jake is interfering with, that his choices have an actual cost.

So effective is that arm of the programme, though, that the actual conspiracy plot suffers by comparison. It’s a shame, then, that the programme opts to spend more time with the weaker strand of political espionage and detective work. Still, there’s one weapon up the show’s sleeve, as the final rule of Epping’s mission only becomes apparent once he’s fully entrenched in the world: “You fuck with the past, and the past fucks with you,” growls Al, in one of many convenient Obi-Wan-style flashback(forward?) sequences. That’s demonstrated in a beautiful restaurant set piece early on, in which the background characters and props all start to malfunction – a witty, genuinely tense use of the carefully designed sets. It’s like watching a remake of Final Destination by the people who made Mad Men.

Even the invisible force of the past fighting back, though, weakens by the time the finale rolls around – in another slightly bungled piece of plotting, you can’t help but wonder why Jake doesn’t just lock Oswald in a room the first chance he meets him, instead of the mildly contrived sprint to the finish line we’re inevitably given (although it does have an enjoyably old-school Hollywood vibe). A brief detour into Amnesiaville only adds to the frustration.

But every time those irritating elements intrude, up pops Sarah Gadon for another exchange with Franco – whether it’s Jake batting off the suspicious enquiries of school secretary Miss Mimi or the pair meeting at the school dance – and your interest is rekindled again. The occasionally underwhelming nature of the central story is intrinsically tried in with Jake’s own character development, his sometimes dubious motivations and often poorly-thought-through actions. But Sadie gives Jake a purpose, whether it’s helping her with her cruel ex-husband or wooing her, as she drinks milkshakes with her friends, so it’s no coincidence that the show opts for a pleasantly quiet finale that takes us right back to their initial romance, as he gets the opportunity to actively improve her life – and share a bittersweet dance. If the whole drama invested more time in their story, 11.22.63 would be a much more rounded watch, but with only eight episodes of 40 minutes, this entertaining thriller zips along at a satisfying pace, with enough heart and stylish headwear to distract you from how daft most of it is. Don’t think to hard and there’s much to enjoy. Time travel. James Franco in a hat. What’s not to like? 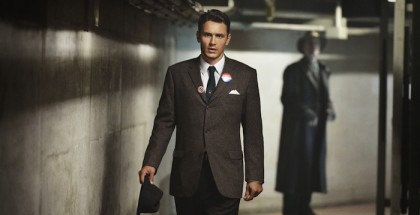