UK TV recap: Legends of Tomorrow, Season 3, Episode 7 (Welcome to the Jungle) | VODzilla.co | Where to watch online in UK 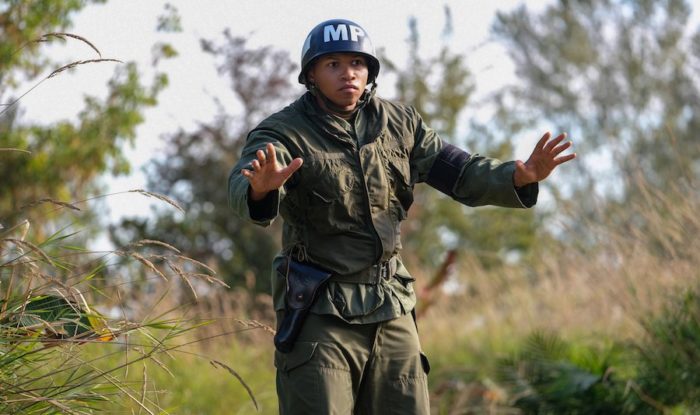 Our time-travelling heroes head to Vietnam and meet Gorilla Grodd in a flawed but fun episode.

Warning: This contains spoilers. For how to watch Legends of Tomorrow, click here.

Last episode of Legends of Tomorrow ended with Damien Darhk his daughter escaping after Nora’s life-force-draining attack (a Darhk family speciality) left Sara in a coma. As a result, Sara sits out most of this episode, which sees the Legends heading to Vietnam and encountering some monkey business.

The episode begins with an unseen creature attacking American soldiers in the Vietnamese jungle, Predator-style. (The sound design has the creature sounding more like a dinosaur than a gorilla, but perhaps that was intended as a fake-out. Or perhaps the sound designer just pushed the wrong button by mistake.) Anyway, whatever the creature is, it registers as a Level 8 Anachronism on Nate’s Anachronometer, so the Legends head to 1967 Vietnam to investigate.

While Ray, Amaya and Zari attempt to question witnesses, Mick and Nate head into the jungle. Mick is immediately on edge, because his dad was stationed in Vietnam in 1967. Nate: “There is almost no chance we’ll run into him in a jungle this big. I’ll buy you a six-pack if we do.” And sure enough, they are immediately captured by some Green Berets, headed by none other than Dick Rory (Evan Jones). Mick: “You owe me a six-pack.”

Mick’s meeting with his father triggers some serious daddy issues, because, as he tells Nate, “I don’t regret killing my old man”, referring to when he let his father burn to death in a fire as a child (something that was covered in Season 2). Nate resolves to help Mick confront his unresolved grief and instigates “Operation Tough Love”, but Mick’s not having any of it. However, over the course of the episode, Mick comes to see the damage that Vietnam did to his father (he’s basically a PTSD case waiting to happen), most notably when he sees that Dick has written the names of the friends he has lost on the back of a photo of Mick’s mother.

Initially, Mick’s new understanding of his father appears to lead to him becoming Dick’s second-in-command, but when Dick nearly slaughters innocent civilians (including Mick’s teammates), Mick stops him, telling him that he’ll regret it in the future, that he’ll “hear their screams forever, and one day, when you have a family, you won’t be able to look them in the eye”. Mick stops short of telling Dick anything about the son he will have, which makes a nice change – maybe the Legends are finally learning something about not messing with the time-line after all.

As for Evan Jones, there are some nice moments with Mick and his dad basically behaving in exactly the same way (both spitting at the same time, both wielding flame-throwing weapons etc.), but Jones’ attempt to mimic Dominic Purcell’s distinctive growl really doesn’t work and ends up being quite distracting.

The other interesting thing to note about the appearance of Mick’s dad is that it confirms something of a pattern in the way the anachronisms have all been tied to the Legends this season – Mick’s dad in Vietnam, Martin’s ancestor in Victorian London, Little Ray in the E.T.-inspired 1980s episode, and arguably Kuasa in the Hollywood episode (when she revealed she was Amaya’s granddaughter) and Zari’s unseen brother in Zari’s future-set introduction episode. The connection is flagged up by Zari, so it’s almost certainly deliberate, and it will be interesting to see how it factors into Mallus’ overall plan in the future.

Meanwhile, back in Vietnam, Ray, Amaya and Zari get talking to Vietnamese guide Anh Ly (Dianne Doan), who agrees to show them the creature they are seeking. That creature turns out to be none other than a time-displaced Gorilla Grodd, who’s been causing peace in Vietnam by telepathically stopping both sides from fighting. That actually sounds quite reasonable, but no, it turns out his actual plan is to assassinate a visiting President Johnson, trigger World War III and start a new world where humans are descended from apes or something. Or “one nation under Grodd”, as Anh Ly puts it.

Amaya decides to use her amulet powers to reach out to Grodd and triggers a giant ape animal spirit that seems to do the trick. However, it backfires, because their shared connection alerts Grodd to the presence of the Waverider, and when the US forces attack, Grodd attempts to hi-jack the ship. Given that Nate explicitly references Apocalypse Now (“We started in Predator and now we’re in Apocalypse Now”), it’s a shame that the writers don’t lean more heavily into Grodd going full Colonel Kurtz in the jungle, just as it’s also a shame that they don’t do a bit more with the connection between Amaya and Grodd – maybe the result of budget restrictions? Frankly, the episode could quite happily have lost the stuff with Jax and Johnson, if it meant more Grodd action.

So, yes, Jax gets his own mini-subplot when he saves President Johnson (a weirdly cast Peter Hall, who puts more comedy into the role than is really necessary) from an unexploded landmine with a can of freezing aerosol that he just happens to be carrying around for some reason. Aside from Jax displaying enough heroism to prove that he deserves his place on the team even without his Firestorm powers, the only thing to come out of this interlude is a lame pie joke from Ray at the end, when Johnson gives Jax Lady Bird Johnson’s secret pecan pie recipe as a reward.

Speaking of Ray, he’s largely side-lined, but Zari gets her own subplot too, through her interactions with Anh Ly, eventually talking her out of being a member of the Cult of Grodd and telling her that the Vietnamese people don’t need a god, but a leader, and the way to peace lies in individuals like her taking the initiative. There’s also an interesting moment where Zari questions returning Grodd to the ARGUS prison he escaped from, because where she comes from, ARGUS are pretty much the bad guys. No doubt we’ll be seeing more of them this season too.

As for Martin, he spends the whole of this episode aboard the Waverider, where he’s assembled Isaac Newton, Galileo, and Marie Curie to help him come up with a way to break Firestorm apart. It’s not entirely clear why Martin chose Newton and Gailileo rather than, say, Einstein and Oppenheimer, but there you go. The sequence gets at least one good laugh when it turns out Marie Curie has stolen the slice of pie Jax was saving in the Waverider fridge, but otherwise it doesn’t really come off. Fortunately, Grodd attacks the Waverider and provides a welcome distraction.

This whole sequence is actually a lot of fun. First, it’s clear that’s where the money went for the episode, because Grodd stomping around on the roof of the still-in-the-air Waverider looks pretty damn good for a TV budget. Martin tries to shake him off by piloting the ship, but Grodd has one last trick up his sleeve and takes control of Sara’s body, forcing her to attack Martin. That’s a great idea and really one that could have used a bit more screentime, but instead it’s cut short, as Newton knocks out Sara with a frying pan and Grodd falls off the Waverider into a newly napalmed Vietnamese jungle.

That’s actually a pretty big flaw for the episode, as the Legends then rather callously celebrate Grodd’s apparent demise with a Thanksgiving dinner, rather than actually attempting to save him, or even checking that he’s really gone. On the plus side, Grodd’s possession of Sara works wonders with her recovery and she returns to the group just in time for pie. It’s a really sweet moment, particularly when she greets everyone individually, kissing Jax’s head and so on.

It turns out, though, there is a reason for Grodd’s poorly-executed exit and that is that Damien Darhk has plucked him from the time-stream in order to persuade him to join the Legion of Doom 2.0. In the episode’s cliffhanger, he basically gives the big ape a time-travel device and sends him off to do his thing, so at least we’ll be seeing more of Grodd this season – hopefully, Amaya’s connection with him can be explored in more detail in future episodes too. It’s worth pointing out that Grodd is a terrific comic book villain in principle and David Sobolov’s voice performance is extremely effective, making the character genuinely scary and intimidating. So yes, a time-travelling telepathic ape is definitely something to look forward to.

All in all, this is a flawed but fun episode that rather squanders its Apocalypse Now and Predator connections (whatever Nate might have said) and under-uses the Amaya and Grodd relationship, but does good character work with Mick’s daddy issues and Zari’s general development. Come back next time for the Crisis on Earth-X crossover event, which sees the Legends battling evil Nazi doppelgangers alongside the casts of Supergirl, Arrow and The Flash.

– Line of the Week: Sara ordering Martin to “Kneel before Grodd!”

– Runner-up Line of the Week goes to Martin for: “If I die today because of a telepathic gorilla, I’m going to be very upset.”

– Nate introduces Mick to Dick as “Officer Schwarzenegger”, which is a blatant steal from a running gag on NBC’s Timeless. (Unless Timeless stole it from Legends in the first place.)

– As this fascinating Twitter thread shows, Vixen’s powers have been massively under-used on Legends of Tomorrow so far. Hopefully, her conjuring of a giant gorilla is an indication that her power-set will expand as the season continues.

Legends of Tomorrow Season 3 is available on Sky 1 every Wednesday, within a week of its US broadcast. Don’t have Sky? You can stream it live or catch up on-demand through NOW TV, as part of a £7.99 monthly subscription, no contract. A 7-day free trial is available for new subscribers.