Arrow’s four-part crossover event ended with Oliver and Felicity impulsively barging in on Barry and Iris’ impromptu wedding and getting married themselves. This episode does at least acknowledge that a lot of people would have been quite annoyed about that, not least Thea, William, all of Oliver and Felicity’s friends and Felicity’s mother, Donna Smoak (aka Mama Smoak), who makes a welcome return here.

The episode begins with what is essentially Oliver and Felicity’s official wedding party, which has all the traditional bits (speeches, throwing the bouquet, cutting the cake, etc.) without the actual ceremony. It lasts 10 whole minutes and has plenty of good character stuff in it, including: an awkward reunion between former flames Quentin and Donna (who’s now back with Felicity’s father, The Calculator); Donna nagging Felicity about not having a Jewish wedding; Quentin giving Oliver his watch in a very touching father-son bonding scene that shows just how far both characters have come in their relationship; William and “Auntie Thea” dancing together and getting on like a house on fire; Curtis getting drunk and making a terrible speech; Rene grabbing the microphone off Curtis and making a great speech; Thea admitting that she misses Roy (if there were a drinking game for this show, a mention of Roy would get you very drunk indeed); and Dinah casually revealing that she’s been engaged several times in the past. And then comes the sting, as Quentin informs Oliver that the D.A. has a star witness who’s prepared to testify that Oliver is the Green Arrow and – oh noes! – it’s someone on the team.

Of course, Oliver’s paranoia and trust issues immediately go into overdrive and he has Felicity and Diggle bring up spy cameras on the other members of Arrow 2.0. By an unfortunate coincidence, the camera catches Dinah having a chat with her ex-boyfriend, who is also Vigilante, so Oliver thinks she’s the rat, despite Diggle trying to defend her.

As luck would have it, Dark Laurel chooses that moment to ambush and kidnap Quentin, beating up Thea in the process and leaving her with a phone. Thea rushes back to the Arrow Cave, the phone rings and it’s Cayden James, who wants the team to steal a nano aluminium amplifier (it says here) from ARGUS if they want to see Quentin alive again. Oliver assembles Team Arrow, but pointedly (and, it seems, spitefully) decides not to tell Dinah about the mission.

There follows some Mission Impossible-style shenanigans at ARGUS HQ and Oliver and company successfully get their hands on the aluminium doodad, but decide to sabotage it before they give it to Cayden. Meanwhile, Dinah shows up at the Arrow Cave and is all ‘what the hell, dudes, did you go on a mission without me?’ and Oliver flat-out accuses her of being the mole / rat / snitch / whatever, before Rene comes clean and admits it was him. Gasp, etc.

As it turns out, Rene didn’t have much of a choice, as Samandra Watson threatened him with never being able to see his kid again. It feels like if Rene had just pushed that angle in relation to William a bit more, Oliver might have come round to his point of view. He comes close to forgiving him as it is, thanks to a pep-talk from Thea, but still says he’s off the team. Except they still need to rescue Quentin, so they all agree to put their differences aside for the sake of getting Quentin back. So they suit up and off they go.

One odd thing about this episode is that Oliver returns to the Green Arrow costume without a second thought, like it hasn’t been a major plot point for the last handful of episodes, or means that he’s broken his promise to William or anything like that. Hell, the episode even reverts to the original “My name is Oliver Queen… I am the Green Arrow” opening narration thingy, like nothing happened. And no one even mentions it in the script, although Oliver does mention that Diggle could be wearing the costume in the future again and when he does, he’s going to need to be able to trust the team.

Anyway, back at Cayden James’ hideout, a captured Quentin is bonding, sort of, with Dark Laurel, during which he learns that her Earth-2 father was killed in a drunk-driving accident. The characters forge a genuine connection (thanks to great work from both Paul Blackthorne and Katie Cassidy) and if he doesn’t manage to get her to switch sides, he at least manages to get her not to kill him like she’s supposed to, so that’s progress.

Team Arrow show up (with strict instructions from Oliver that they stay in one particular place) and during the handover, it turns out that Cayden somehow knows that Team Arrow had sabotaged the aluminium whatsit. As a result, he orders Quentin killed, but luckily Rene and Curtis have gone off-message and aren’t where they’re supposed to be, which sort of saves Quentin’s life. Well, that and the fact that Dark Laurel had decided not to kill him anyway. Oliver arrives just in time to see Dark Laurel let Quentin go, before she sonic screams a load of giant pipes onto his head and makes her escape. Oliver: not happy.

Back at the Arrow Cave, Oliver is even less happy and he comes down hard on Rene for disobeying orders, even though, as Rene points out, he made the right call and Quentin was saved. But no, Oliver won’t be budged and Rene is off the team. Dinah’s pretty annoyed by this point, so she quits in sympathy, as does Curtis, albeit in a much calmer, more rational fashion, telling Oliver and Felicity that he can’t get past the fact that they were willing to spy on their own team members. So Team Arrow is officially back to the original three.

While inter-team betrayals are a perfectly fine option for dramatic conflict, it’s frustrating here on a number of levels. The first is that we’ve been here before, several times, not least just last season, when Evelyn Sharpe turned out to be working for Prometheus all along. Second, it simply doesn’t seem permanent – all it would take to sort everything out is for Oliver to calm down a bit. What’s worse is that the whole situation makes it seem like Oliver has learned nothing at all over the last few months, when, in fact, the series has gone out of its way to show his emotional maturity and progress – this is meant to be a new, improved Oliver who can talk rationally about his feelings, but that’s not who we get here. No doubt everyone will be back together before too long, but this all feels too forced to really convince.

In the meantime, Oliver, Felicity and Diggle have something disturbing to worry about, which is the question of how Cayden James knew they had sabotaged the aluminium doo-hickey. Which takes us to the genuinely surprising cliffhanger for the mid-season finale, which starts with Cayden and James watching and listening to Oliver, Felicity and Diggle on the secret camera that Dark Laurel secretly installed in the Arrow Cave when she invaded it back at the beginning of the season. Ah, you think. So that’s how they’ve been one step ahead the whole time. Clever. And you think that’s going to be it, but no! One by one, Cayden and Laurel are joined by Anatoly (what the hell, dude?), Vigilante Vince (which is what we’re calling him from now on), James, the sort of glorified henchman guy we’ve seen around a fair bit, and finally Ricardo “The Dragon” Diaz (whose comics background suggested we’d be seeing more of him than just being Diggle’s drug supplier), at which point Cayden says that getting Team Arrow to fight amongst each other is “only the beginning”. Dan-dan-daaah, etc.

Okay, we’ve got to admit, we didn’t see that coming. But, really, as far as supervillain team-ups go, it’s less a Legion of Doom and more of a Legion of Hmmm. And as mid-season cliffhangers go, it’s not exactly Oliver getting stabbed through the chest and kicked off a cliff by Ra’s al-Ghul, is it? For all that though, it’s still the high point of this very underwhelming episode. Let’s hope the season regains its sense of direction when it comes back in January. Come back next time, when Team Arrow 2.0 form their own spin-off team! Or something.

– Arrow Gadget Watch: Oliver’s bow has a cool remote-control electro-bolt shooter on it, which he uses to blindside Cayden’s goons.

– Nicest, most unusual moment of the whole episode? Dinah, Curtis and Rene all meeting up to share a giant burger and moan about Oliver.

– Most unexpected appearance of the episode? No, not Anatoly. That would be Oliver and Felicity’s chatty neighbours from Ivytown, who attend the wedding. It’s nice to know that they all kept in touch.

Arrow Season 6 is available on Sky 1 every Thursday, within a week of its US broadcast. Don’t have Sky? You can stream it live or catch up on-demand through NOW TV, as part of a £7.99 monthly subscription, no contract. A 7-day free trial is available for new subscribers.

Why you should watch The League of Gentlemen

Elseworlds: Where can I watch the Arrow-verse crossover?... December 13, 2018 | Staff Reporter 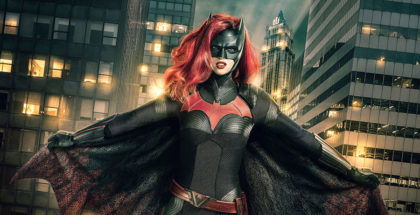 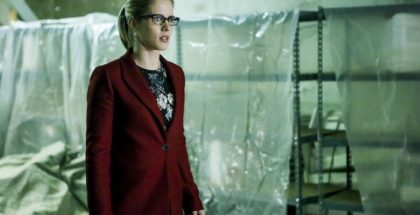