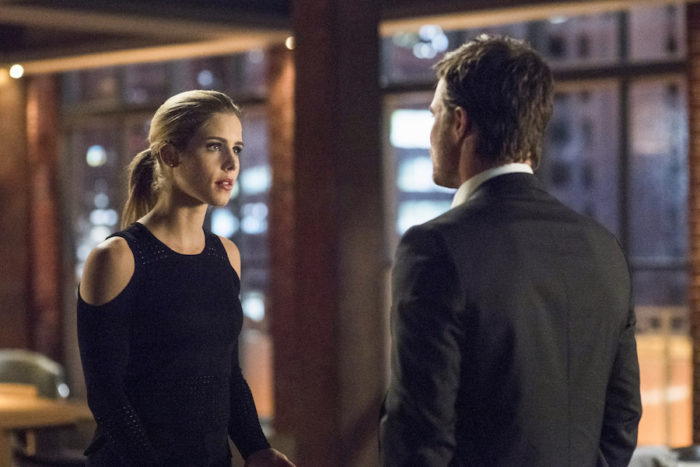 Arrow stumbles with a Helix-focused episode that's light on character motivation and heavy on hypocrisy.

It’s fair to say that Dangerous Liaisons isn’t the most promising start to the back end of Season 5. With just three episodes left to go until the finale, one has to hope that this is just a blip and that the showrunners have something a lot more exciting lined up for the next few episodes. As it is, while you can see what they were going for here, it never really comes together in satisfying fashion.

The primary focus is the hunt for Adrian Chase / Prometheus, who escaped his protective detail at the end of the last episode. He’s now in the wind, as they say – so much so that Josh Segarra doesn’t even appear in the episode, although he’s there by proxy on two notable occasions. The first of these occurs in the opening scene, when Team Arrow think they have Prometheus cornered in an old arcade and it turns out he’s booby-trapped one of the games to open fire on them. This is pretty much the high point, capped off by Curtis’ concern for the vintage arcade consoles.

With Team Arrow admitting defeat in the pursuit of Prometheus, two separate options open up: first Lyla shows up, offering ARGUS’ resources and man-power to track him down. And secondly, Felicity seeks help from Helix – the less-than-legal hacktivist group she’s been working with all season – and discovers that their leader, Cayden James, has been working on a biometric tracker that could find Chase in a heartbeat and is being held illegally by, yes, you guessed it, ARGUS. So Helix agree to help Felicity on the condition that she helps them break James out of ARGUS’ custody first.

Basically, lines are crossed all over the place during this episode and nobody is particularly happy about it. Diggle gets mad at Lyla, when he realises she’s holding James without due process, completely forgetting that time when he kept his own brother locked up for almost an entire season before killing him. Meanwhile, Oliver gets mad at Felicity for going all the-end-justifies-the-means, despite the ridiculous number of times that their position in that argument has been reversed in the past (usually multiple times per season). And, finally, Felicity gets mad at Alena (still the only real character we’ve properly met in Helix, which is a disappointment in itself), who “accidentally” kills an ARGUS operative with a lift, conveniently forgetting that time when she nuked an entire town.

So there’s a lot of deliberate reversal going on in this episode, and, even though Felicity points out Oliver’s hypocrisy, none of it lands with the desired impact. This is mostly because the characterisation of both Felicity and Oliver in this episode is decidedly fuzzy. Oliver pouring himself whiskey in the Arrow Cave and asking everyone to leave him alone is meant to indicate that he’s still in a very dark place after Adrian basically made him admit that he liked killing people. And yet Oliver is apparently only in a funk in the Arrow Cave, because he’s still totally capable of doing his day job as the Mayor of Star City. (If he’s keeping a bottle of scotch in his desk at City Hall, we don’t see it.)

Similarly, although we can guess that Felicity’s obsession with catching Prometheus is down to the fact that he killed her fiancé – well, tricked Oliver into killing him, but let’s not go there right now – she hasn’t so much as mentioned Billy since he died, and the writers didn’t give Billy enough screentime for his death to have had any notable effect on the audience.

Felicity’s attraction to Helix is much more understandable in the context of them flattering her, tapping into her old hacktivist dark side from her student days and her being side-lined by Team Arrow. Except that she hasn’t, really. If anything, she’s been a key part of keeping Team Arrow 2.0 together, something that’s given her more purpose than she’s had in previous seasons. So her reasons for siding so completely with Helix (even after Alena kills an ARGUS agent) are ill-defined at best.

There’s not much in the way of action either, unless you count gunfights. Oliver has temporarily renounced the Green Arrow costume, so he doesn’t even get to do fun things with arrows anymore and has to make do with a generic masked-man-in-black outfit. The main conflict comes during the jail-break, when Felicity stops Oliver and Team Arrow with a laser grid (presumably something she’d been working on in her spare time) that allows Helix to escape with James.

However, when Felicity gets back to the Helix Bunker, she finds a message from Alena telling her they don’t need her anymore, because her connection to Team Arrow makes her a liability. Still, they leave her the biometric tracker as a gesture of goodwill. She takes that back to the Arrow Cave, where she and Oliver have a half-hearted argument and then she plugs in the tracker and it tells her that – ruh roh! – Chase is inside the Arrow Cave. Then, the console explodes, throwing her and Oliver across the room and providing this week’s cliffhanger. Will they survive? If the promo clips are anything to go by, then yes. Yes, they will.

There are two main subplots this episode. The first is the aforementioned conflict between Diggle and Lyla, where he accuses her of becoming more like Amanda Waller every day, now that she’s head of ARGUS and she counters with the fact that sometimes she has to do less than legal things (like keep James locked up in a black site) for the greater good. There’s a glimmer of interest here, because the show seems to be going out of its way to be fair to both sides, although the fact that we’ve never met Cayden James and have no way of assessing his actual threat level tips us more towards Diggle’s side. Either way, nobody wants to be watching Diggle and Lyla’s marital problems this close to the season finale and there’s a worrying hint that this is the start of an ongoing subplot for the pair.

The second subplot involves Quentin and Rene, who are otherwise largely side-lined for the episode. Quentin discovers that Rene has visitation rights for his adorable daughter, Zoe (who’s in a foster home), but has never visited her. Rene tells him (and us) a sob story about getting drunk while making soup and Zoe burning her hand on it, after which he walked away, figuring she was better off without him. Quentin’s not having that, though – it’s not hard to see why he would want a man reunited with his daughter – so he arranges a visit, after which Rene agrees to fight for custody again. So that’s another subplot that will be clogging up the next few episodes, when all we want is a Team Arrow vs Prometheus smackdown. And what about old still-alive Dolph Lundgren, eh? And Talia?

All in all, this is a disappointing episode that introduces a worrying number of potential new plot directions instead of doubling down on the pursuit of Prometheus. Here’s hoping the writers can get it together in time for the finale. In the meantime, tune in next episode to discover how Oliver and Felicity escape that explosion!

Slings and arrows of outrageous fortune:

– No visit to Flashback City this episode. No doubt there will be a couple more before the end of the season – the final episode is called Lian Yu, so that seems like a safe bet – but it was a welcome relief not to have them this week.

– T-sphere watch. Curtis’ balls prove their worth once again this week, most notably in the arcade sequence. It’s incredible how much a couple of pieces of flying spherical weaponry have transformed Mr Terrific as a character. Throw those balls, Curtis!

BBC to release binaural version of Doctor Who on iPlayer 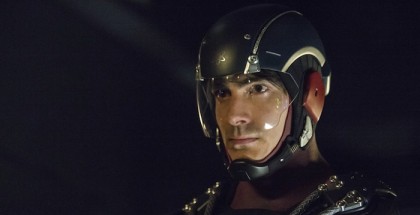