With just five episodes left in Season 6, it’s a pretty bold move for Arrow to devote one of them to Ricardo Diaz, but that’s what we get with The Dragon. The results are somewhat mixed. On the one hand, it’s a nice change of pace and it’s good to finally get some background on the season’s surprise Big Bad. And on the other hand, it arguably doesn’t go far enough, since at the end of the hour, it doesn’t really feel like what we’ve learned about Diaz justifies the time spent learning it. Still, it does give Kirk Acevedo a chance to finally sink his teeth into the character and it’s worth it for that alone.

The episode begins with a flashback that is clearly going to be Important For Later, as we see a young Diaz being bullied in an orphanage by an older boy named Jessie. Little does Jessie know that tiny, weedy Orphan Diaz is going to grow up to be a proper wrong’un. Odds are we’re going to be seeing Jessie again before the end of this episode and it’s not going to be pretty.

In the present day, Diaz and Black Siren are hanging out in Bludhaven. Black Siren is wearing her dark bobbed wig again, so you know she means business. They haven’t really established why Not-Laurel wears that wig – is it meant to protect her secret identity as Laurel Lance? A lazy substitute for a Black Siren costume? Or just something she wears for kicks when there’s some sonic screaming to be done? If you were hoping you might find the answers to that question in this Laurel-centric episode, your hope has fallen on deaf ears.

Anyway, it turns out they are there to meet a representative from The Quadrant, a seemingly all-powerful crime syndicate that we’re only hearing about now for the first time, six seasons into a show specifically about taking on criminal activity. Whatever, Arrow writers. Said representative is Eric Cartier (nicely played by Ashton Holmes), the smug, arrogant, entitled son of key Quadrant member Remy Cartier. Eric effectively wants Diaz to audition for a meeting with his father, and asks him to take out an informant who’s in witness protection with the FBI. Diaz agrees, but you can tell he’s not happy, because he heads into the bathroom and smashes a mirror with his bare hand. Cue the opening credits for the episode, which, in a nice touch, replace the usual Arrow logo with a dragon logo.

So, Diaz and Black Siren track down the safe house and retrieve the informant, wasting a load of FBI agents in the process. You can sort of tell from Not-Laurel’s reactions that she doesn’t enjoy killing people as much as she used to, something that will again be Important For Later. Outside the safe house, Eric pulls up in a limo and takes out both the informant and Diaz with a machine gun. Shock twist! Except, no, Diaz is one step ahead and has thoughtfully worn a bulletproof vest, just in case something like this happened.

Diaz and Black Siren head over to Eric’s bar and take out all his henchmen with a sonic scream. Diaz’s thing seems to be that he’s mad as all hell under the surface, but he never lets it show in his voice or demeanour, maintaining the same level-headed composure at all times. It’s genuinely chilling and it gives him a real sense of menace. It’s worth noting, too, that Kirk Acevedo is terrific in these scenes – he’s a very watchable actor and it’s fun to see him finally get the chance to flesh out the character a bit more. There are some nice touches in the performance too, like the hint of a smile every so often; it’s fascinating to watch the character and wonder if anything will ever crack the facade.

Anyway, once the bar is cleared, Diaz straight-up tortures Eric and it’s pretty dark stuff, even for Arrow, with knives to faces, severe beatings and a surprising amount of blood. Once again, Not-Laurel looks disgusted and turns away, which just adds more fuel to the idea that she’s eventually going to turn on Diaz, romantic relationship or no romantic relationship. During the beating, Diaz recalls his bullying as a young orphan at the hands of Jessie and basically says he vowed never to be at anyone’s mercy ever again. Eric doesn’t help his case any by admitting that he never even took Diaz’s proposal to his father and was instead just going to steal all Diaz’s Star City rackets once he’d killed him. Eventually, the torture does the trick and he gives up the location of the Quadrant meeting his father is attending.

On their way to the meeting, there’s a nice scene that just has Diaz and Black Siren talking in the car. You don’t see that sort of thing often in Arrow and it’s another aspect that makes this episode stand out. Diaz is still talking about how Jessie’s bullying and how he lived with his fear for so long that he named it “The Dragon”. This doesn’t make a whole lot of sense, to be honest, but hey, an origin story is an origin story. He makes it clear that his intention to join forces with The Quadrant is as much about respect and power and not being a loser as it is about building a criminal empire. Not-Laurel says Diaz reminds her of “the guy that brought me to this earth” (meaning Zoom, from The Flash), who was so full of hate that it consumed him, but Diaz says not to worry, he controls The Dragon. Honestly, Diaz, you really didn’t need to bother with all this – it was fine when it just seemed like you’d chosen “The Dragon” as a cool supervillain name because it had a connection to your fondness for martial arts.

When they arrive at the Quadrant meeting, Diaz sends in a gagged Eric, seemingly to announce their arrival. However, it turns out they’ve rigged him up with an explosive vest, and he explodes, taking out a load of the Quadrant’s minions in the process. Fair play to Diaz – he does not mess around. Eric, we hardly knew ye, etc.. Now that Diaz has got the Quadrant’s attention, he demands a seat at the table. Naturally, Eric’s father is pretty pissed off, and refuses Diaz’s demands, so Diaz kills him. The other three Quadrant members pretty much take this in their stride and one of them (oddly, only one of them speaks) says Diaz’s proposal intrigues them, even if they don’t entirely agree with his methods.

Afterwards, Diaz and Not-Laurel hole up in a room somewhere. Not-Laurel has ditched the wig and has her long blonde hair again, whatever that means. Diaz now has a Quadrant ring on, so it seems he was successful in his pitch, but he’s still not happy. He takes Not-Laurel on a little drive. No prizes for guessing where they go – that’s right, it’s Jessie’s house. Jessie has no idea who Diaz is, which somehow makes what happens next all the sadder. Anyway, Diaz takes him up to the roof of his building, talks to him for a bit (pointing out who he is and showing him the charred photo that Jessie burned in the opening flashback) and then straight-up sets fire to him, with Jessie screaming the whole time. Again, it’s pretty brutal, even by Arrow’s standards. Is Arrow meant to be a show for kids? No, really, is it? Because this episode is really quite nasty. Anyway, the episode ends with Not-Laurel’s shocked and disgusted face, as she watches Jessie burn, telling us pretty conclusively that she’s pulling away from Diaz and is going to get her redemption arc after all. That or a noble sacrifice, although surely they’re not going to kill her off again? Won’t somebody think of poor Quentin?

All in all, this is a pretty great episode for Diaz, giving some much-needed background on the character and his motivations. And yes, it makes him a lot scarier, so there’s that. Ironically, this is the one episode that could really have used some flashbacks – it would have been nice to see where he got his sweet fighting skills, for example. Or maybe find out how he turned to crime in the first place?

Oh, right, Felicity and Oliver. Scattered throughout the episode is the slimmest of subplots, in which Felicity makes up with Curtis (yeah, Curtis is in this episode too) and they start working on Helix Dynamics. While they’re working, Felicity tells Curtis that, following his revelations last week, Oliver is out there on his own now, rejecting her help as Overwatch and effectively locking her out of the Arrow Cave. They see a news report that says the Green Arrow might have been killed in an explosion and Felicity panics and rushes home, only to find that Oliver’s totally fine. He tells her not to worry, he knows what he’s doing and he promises he’ll always come back to her. All of which has the feeling of a scene that will be showing up in the Previously… in the not too distant future. Come back next time when Diaz captures Oliver and challenges him to a boxing match for control of Star City! No, really.

– It was actually kind of refreshing not to have to check in with Dinah, Rene, Quentin, Diggle, City Hall or the SCPD this week. Frankly, they should have ditched the Felicity, Curtis and Oliver scenes too and committed to the full Diaz hour.

– It’s pretty clear at this point that Ricardo Diaz isn’t going to be on anybody’s list of the The Top Five Arrow Villains, but this episode at least made a good attempt at course correction. We can say this much – at least he’s better than Vinnie Jones’ Brick from Season 3.

Arrow Season 6 is available on Sky 1 every Thursday, within a week of its US broadcast. Don’t have Sky? You can stream it live or catch up on-demand through NOW TV, as part of a £7.99 monthly subscription, no contract. A 7-day free trial is available for new subscribers. 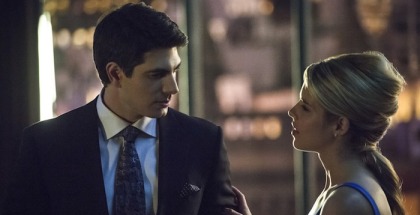