UK TV recap: Arrow Season 4, Episode 9 | Where to watch online in UK | How to stream legally | When it is available on digital | VODzilla.co

Finally freed from the burden of setting up Legends of Tomorrow, Arrow delivers a solid mid-season finale and ends on a kicker of a cliff-hanger.

The previous eight episodes of this season of Arrow have been lumbered with the burden of setting up certain elements of new sister show Legends of Tomorrow (specifically, getting Sara into the Lazarus Pit and rescuing Ray Palmer from his tiny prison). However, with last week’s fun crossover episode finally bringing the Legends set-up to a close (read our Legends recaps here), Arrow is now free to properly focus on the task at hand, namely, finding out whatever it is that Damien Darhk is up to. In doing so, it delivers an exciting mid-season finale that moves things forward in very promising fashion.

The episode begins with one of Darhk’s drones shooting up Oliver’s Star City Bay (Star City has a bay? Who knew?) clean-up initiative, injuring dozens of people. As the prospective mayoral candidate behind the initiative, Oliver is understandably annoyed about this and he figures that Darhk and H.I.V.E. must need the Bay for some nefarious purpose or other. He asks Diggle to get the information out of Andy (Andy update: still in the Team Arrow cage), but Andy’s not talking.

With no leads, Oliver switches tack and decides to make good on his promise to fight Damien Darhk in the light, not the darkness. He calls a press conference and basically outs Darhk as the leader of H.I.V.E. (Public: “Huh?”, Oliver: “Look, it’s a shadowy organisation, okay?”) and the man in charge of all the ghosts / gunmen that have been shooting up the city recently. Darhk: not happy.

Naturally, this sets Oliver worrying that he’s basically put everyone he loves (as Oliver Queen, that is, since Darhk still appears to be, um, in the dark about Oliver’s secret identity) in the cross-hairs and, well, he’s not wrong. Sure enough, at Oliver’s campaign HQ holiday party, Darhk and his goons show up and kidnap everyone Oliver cares about, namely Thea, Felicity and Diggle. (Oliver, off-handedly, when he’s told about Thea – “She’s gonna be fine”). It’s around about this point that we learn of Darhk’s supplies of a deadly nerve gas that he’s been testing on loyal, brain-washed H.I.V.E. minions. Ruh roh!

After a surprisingly small amount of moping and self-recrimination (bolstered by a genuinely sweet exchange with Laurel, in which the pair share so much chemistry that you genuinely start to panic about how much longer Laurel has left), Oliver teams up with Laurel, Quentin and Malcolm to rescue his friends. First, Oliver goes on a ferocious rampage, shaking down ghosts all over town in order to find out where Felicity et al. are being held, but he comes up empty-handed. Then Malcolm comes through with a ghost’s encrypted phone, so Oliver offers up himself in exchange for the rest of Team Arrow. Good plan, Oliver. Yeah, that’ll work.

Of course, once Oliver arrives at H.I.V.E. HQ, Darhk goes back on his word anyway and sticks Felicity, Thea and Diggle back in the gas chambers, but thankfully Malcolm (wearing the Green Arrow costume as a cunning distraction) have tracked Oliver’s location and show up in the nick of time to rescue everyone. This is a fun sequence and it gives Laurel perhaps her best Black Canary hero moment to date, as she uses her Canary Cry to free Felicity, Thea and Diggle from the gas chambers. Nice work, Laurel! The sequence also features Malcolm nearly dying at Darhk’s hand (thanks to that life-draining force-choke move he has) until Oliver comes to his rescue – oh, and Quentin showing up with the police in time to wrap things up. There’s lots of good stuff all around.

Speaking of good stuff, before we get to the episode’s cliff-hanger, let’s back-track a bit and check in with all the various sub-plots. (This is sort of relevant – bear with us.) In among the high-stakes kidnap-and-rescue plot, we also have Mama Smoak finding Oliver’s engagement ring and figuring out – and, of course, immediately telling Felicity – that Oliver intends to propose. Cue excited Olicity fans everywhere and some amusing moments where Felicity barely manages to conceal the fact that she knows the engagement is coming.

Meanwhile, Mama Smoak has her own little thing going on this week, as Felicity catches her canoodling with Quentin at Oliver’s campaign HQ party. Hurrah! Quentin and Mama Smoak make a pretty damn good couple, so we hope the showrunners have plans for this development beyond either a. killing one of them off in the near future, or b. comedy sub-plot material.

As for Thea, when she’s not getting kidnapped and rescued, she’s mostly preoccupied with the fact that her bloodlust disappeared when Darhk tried that life force move on her. Malcolm is equally concerned and he tries to find out what’s behind Darhk’s powers, but comes up with nothing, which is a bit weak, considering – as he keeps reminding everyone – he’s Ra’s al-Ghul now and is meant to know about this sort of thing. He knew enough about Vandal Savage last week, so how come he doesn’t know about Darhk?

Anyway, to the cliff-hanger. The “Previously on Arrow” section at the top of the episode went out of its way to remind us of the ongoing Who’s In The Box mystery from the flashforward at the beginning of the season, so the audience was primed to expect someone to cark it at the end of the episode, not least because it was at this point last season that Arrow pulled that jaw-dropping Ra’s-al-Ghul-kills-Oliver-and-shoves-him-off-a-cliff move.

Anyway, with that in mind, the episode goes out of its way to tease who could be biting the big one at the hour’s end, giving each of the important characters meaningful moments that could well signify their final scenes on the show. So, we get: Donna and Quentin finding happiness with each other, as above; Laurel, in full Black Canary costume, having a moving heart-to-heart with her father (they even talk about not wanting to lose each other, for God’s sake), and also sharing perhaps her most engaging scene to date with Oliver, as she gives him sound advice; Malcolm coming dangerously close to death, when he takes on Darhk in the Green Arrow costume (as close to a heroic sacrifice moment as Malcolm has come in a long, long time); and Diggle making significant progress in the rebuilding of his relationship with Andy.

And then, of course, there’s the engagement. Flushed with the success of the rescue, Oliver conducts a switching-on-the-Christmas-tree ceremony and chooses that moment to propose publicly to Felicity. (Felicity: not as surprised as she would have been). Big swoons all around. It’s a very romantic moment (and shot very nicely with the lights of the tree) and it represents the high-point of the Felicity-Oliver romance, to the delight of shippers everywhere.

So, naturally, the episode ends with a by-no-means-out-of-danger Oliver driving off with Felicity in a limo, only for a squad of Darhk’s goons to show up (for literally, the third time in this episode alone) and shoot up the car, leaving Felicity very badly wounded and possibly dead (we don’t get quite enough of Oliver’s reaction to judge just how bad the damage is, but it’s bad).

So… is Felicity in the coffin? That would certainly explain Barry showing up at the graveside, but we’re going to go ahead and say no, the show is definitely not killing Felicity off – at least, not yet. Still, it’s a brutal blow to the afore-mentioned Olicity fans, who are taken from total, longed-for joy to complete and utter despair in the space of two scenes. Nice work, show.

Meanwhile, on Flashback Island, Oliver fought a shark! Admittedly, it was mostly offscreen, but still, it was the most exciting thing to happen in the flashbacks all season. The actual plot involved Oliver and his non-specifically-accented captive, Taiana (Spanish? Russian? No clue), following a treasure map, which led to Oliver swimming out to the shipwreck, where he found… something. The shark attack happened as he swam back (Oliver: 1, Shark: 0) and then things went from bad to worse, as he and Taiana were met by Conklin on the beach, who denounced Oliver as a spy. D’oh!

All in all, this is a solid mid-season finale, with strong character interaction (Malcolm and Laurel teaming up is particularly good), exciting action and a raising of the stakes in the Damien Darhk plot, as well as a dramatic cliff-hanger, even though they’re fooling no-one with their Felicity-is-dead fake-out. Here’s hoping Arrow can maintain this momentum as it heads into the back half of Season 4.

Once again, props are most certainly due to Neal McDonough, who continues to have a blast in his role as Damien Darhk, making him one of the show’s most enjoyable villains to date. The key to his performance is that Darhk himself is having a great time, injecting his lines and movements with a certain theatricality that really works.

It seems like Arrow is going all-Darhk, all-the-time this season, with even the Villains of the Week (like Anarky, for example) being connected to hun in some way. Hopefully, the show has a few more up its sleeve, because Arrow is never more fun than when it’s dipping into D.C.’s vaults for colourful and obscure bad guys.

There was a shot of Darhk towards the end with a woman and a child that looked like it was meant to be his family. Did we know Darhk had a family? And what’s he up to with those fields of corn, do we think?

Arrow: Season 4 is available to watch online on Amazon Prime Video, as part of a £5.99 monthly subscription.

Where can I buy or rent Arrow online in the UK? 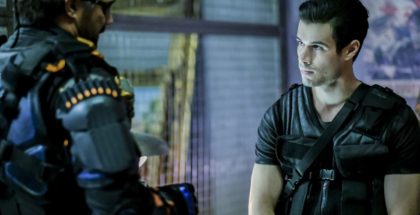