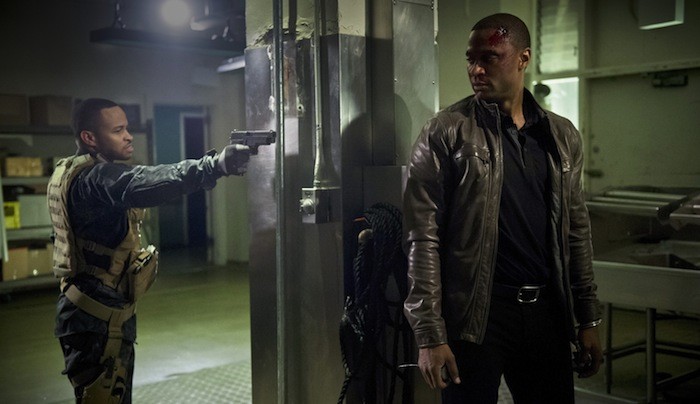 Arrow negotiates a tricky balance between fun and misery as the season enters its endgame.

After last week’s farewell to Laurel (still dead), Arrow gets back to the business at hand this week, bringing one particular plot strand to a heart-breaking conclusion and moving several pieces into place for the season’s endgame – not before time, either, as the Season 4 finale is only two episodes away. This means that the writers are forced to strike a tricky balance between the fun stuff with Oliver and Felicity, the mystery of what happens to Thea and the darkness of Diggle facing off against his younger brother. Despite the necessary tonal shifts, it’s a generally successful episode, although there are a handful of niggles in the magic department.

On the whole, Arrow works best when it’s tightly focussed, with all of the characters working together towards a single goal, allowing for maximum interaction and teamwork. That said, the show achieves some decent results by splitting up the team this week, a necessary evil, given the wildly different tones of each section. So, Oliver and Felicity head to Hub City to track down an acquaintance of John Constantine’s (appearing by virtue of an offscreen phonecall), who may be able to teach Oliver some magic tricks; Diggle heads off to buy nappies and ends up in a deadly confrontation with his brother; and Thea goes on a break with “political operative” Alex that quickly turns into an episode of The Twilight Zone.

Despite Felicity’s insistence on no longer being part of Team Arrow, it seems that she is once again back on the team, or at least back at her old seat in the Arrow Cave, as the team discuss their next moves. Under the circumstances, it’s pretty generous of her to agree to accompany Oliver to Hub City (“Just because we’re not together doesn’t mean you have to do this alone”), but then, it does involve going undercover in a casino and we all know how much Felicity enjoys going undercover in a casino.

So, after a few games of Blackjack, Oliver and Felicity meet John Constantine substitute Esrin Fortuna (Gabriella Wright), a sexy lady magician, sorry, immortal shaman, who’s apparently been invented for the show, rather than corresponding to an existing D.C. character. She tells Oliver that his only chance of defeating Darhk’s magic is to counter his darkness with light, but when she gives him a practice run, he fails miserably, overwhelmed by the darkness within him, which is handily represented by clips of all his previous foes and all the people he loved that have died.

Oddly, rather than persist and give it a few more goes, Oliver’s lessons appear to stop at that point (perhaps Fortuna charges by the hour?) and they leave, but not before Fortuna tells Oliver “That tattoo Constantine gave you does many things”, a handy catch-all piece of information that a. single-handedly explains the point of the flashbacks this season, and b. looks like it will be Important For Later. It might have helped if Constantine had explained the rules of the tattoo when he gave it to him in the first place – hell, it might even have saved Laurel’s life – and it’s not like Oliver doesn’t know the tattoo has magical powers… but let’s not go into that right now. It’s also frustrating that Fortuna is badly under-served by the script – we learn next to nothing about her, when it feels like that would have been a good opportunity for Oliver and Felicity to find out what it is that they’re up against, as vaguely gesticulating at an idol doesn’t really cut it.

Anyway, the upshot of all that is that later on, after wading into the ongoing battle between Diggle and Diggle (their sudden appearance being played for surprise value, rather than given an adequate explanation or set-up), Oliver confronts Darhk and almost dies when Darhk pulls his draining-the-life-force move, until suddenly – gasp! – Oliver’s eyes glow yellow and he’s able to repell Darhk after all. Hurrah! He tells an understandably gobsmacked Felicity that he was able to draw on the people he loves for the lightness he needed to channel the magic, a list that basically amounts to Felicity, Diggle and Thea. All this would be fine if this sequence was better directed – given that we saw the darkness within Oliver as a sequence of misery-laden flashbacks, it would have made perfect sense to have a counterpoint series of joyful moments. Maybe they couldn’t find enough of them to warrant a whole sequence? Or maybe the sequence got cut for running time reasons? Either way, it feels like the moment goes by too fast and lacks the desired emotional impact.

As for Diggle, he plays right into Darhk’s hands, without even realising it. After running into Andy, Diggle gives chase, intent on bringing his brother to justice, with Lyla monitoring his movements from a mobile A.R.G.U.S. lorry, where she and Baby Sara have been hiding out. However, Diggle walks into a trap and gets captured, only to escape and head back to protect Lyla and Sara… whereupon it turns out it was all a set-up and Darhk has tracked him to the lorry because he needs to extract a set of nuclear codes (referred to as the Rubicon codes) from under Lyla’s skin, where she implanted them for safe-keeping. (Darhk’s magic-assisted removal of the implant is a nasty little detail that the show handles quite nicely, showing you just enough so that you think you’ve seen a lot worse.)

All of this involves some exciting action sequences, as H.I.V.E. goons attack the truck – there’s a priceless Baby Sara reaction shot that’s hopefully already on the internets somewhere – and Diggle and Lyla try to protect themselves. There’s also a slightly dodgy moment, when Diggle zips out of the truck on a motorbike with Sara strapped to his back, even though it’s fairly likely people are going to be shooting at him from behind. Massive parenting fail, Diggle.

Anyway, after Darhk escapes with what he came for, Diggle tracks down Andy and has him cornered and unarmed. Andy then essentially goads Diggle into killing him, by telling him he’ll never stop trying to kill Diggle, Lyla and Sara, and Diggle shoots him in cold blood. It’s never quite clear whether Andy knows he has to die and is goading Diggle to that end, or whether he genuinely believes his brother won’t pull the trigger, but either way, it hits Diggle as hard as you’d expect, given that he’s spent his whole life trying (and failing) to protect his younger brother. Even an emotional plea, where he tries to remind Andy of his own wife and child (unseen for close to two seasons now), comes to nothing. This leaves Diggle in an extremely dark place, having lost both Laurel and Andy in the space of three weeks (or whatever the show’s timeline is), and it’ll be interesting to see where this darkness takes him in the next couple of episodes. We get a tiny hint of it, when he lies to Lyla (“He went for my gun – I had to put him down”) about how exactly it happened, which could be the tip of a slippery slope or it could just be Diggle tweaking the truth out of guilt. I have to say, I’m not sorry to see the back of Andy – Eugene Byrd’s permanently moody performance never really worked for me and the show failed to demonstrate why we should really care about him, outside of his relationship to Diggle. Ah, well.

Meanwhile, Thea wakes up with Alex in what appears to be an idyllic version of suburbia and is, of course, immediately suspicious, culminating in an amusing bit of paranoia, where she’s convinced that all the nature sounds she can hear (dog barking, birds chirping, etc) are being played on a loop. Except it’s not paranoia and that really is what’s happening – it turns out that Alex is drugged up on Darhk’s Yellow Pills Of Compliance and as Thea tries to escape, she runs smack into the wall of a giant invisible Truman Show-style dome, which serves as the show’s cliff-hanger ending.

Considering the show only gives Thea a few scenes for this whole thing to unfold, it’s handled pretty efficiently, but it might have been better if it had been teased out a bit more. As it is, we’re never really in any doubt that Thea’s suspicions are correct, but a few more scenes could have helped establish a bit of doubt, or at least play with the idea that it’s all in Thea’s head, because she’s super-bored. To be fair, they do hint in that direction, but the scenes move too quickly for them to really do anything with it. Still, it adds a nice dash of mystery and gives rise to a genuinely unexpected moment, since we’ve never seen anything quite this elaborate in an episode of Arrow before (give or take Malcolm’s Giant Earthquake Machine).

More importantly, the reveal of the Dome (hereafter known as the Theadome), coupled with the theft of the Rubicon codes finally (finally!) gives us some idea of what Darhk’s Genesis Project is all about. Yes, he apparently wants to nuke the entire world, with just the chosen few getting to survive in one of these domes, which he’s apparently been putting in place all this time without anyone noticing. How exactly that ties into Darhk Wife getting elected Mayor of Star City is not entirely clear at this point, but no doubt all will be revealed next week. Ha! Okay, maybe not – it’s fair to say that long-term plotting has not been this season’s strong point to date (or the previous seasons, come to that), but I’m willing to be proved wrong next week.

Meanwhile, on Flashback Island… nothing happens. Well, sort of. There are no official flashbacks this week – which makes for a nice change and also makes it abundantly obvious just how superfluous the flashbacks have become – but we did get a brief shot of Taiana with glowing yellow eyes during Oliver’s everything-is-awful memory sequence. So that’s… a flashforward of a flashback? No doubt we’ll see what that’s all about soon.

All in all, this is a fun, albeit tonally uneven, episode that wraps up an outstanding plot strand and positions its key players for what looks like an exciting, high-stakes season finale. Don’t mess it up, Arrow!

– What is Malcolm up to anyway? Surely, he has some other plan up his sleeve, rather than being Darhk’s second-in-command? My money’s on some sort of redemptive last-minute sacrifice to save Thea (or possibly the world) in the season finale.

Arrow: Season 4 is available to watch online on Amazon Prime Video, as part of a £5.99 monthly subscription.

Where can I buy or rent Arrow online in the UK?

What does the white paper mean for the BBC?