Already seen Episode 6? Read on at the bottom for additional, spoiler-filled comments.

What a tangled web our Penny Dreadfulites lead, as they wake up the morning after the night before. Now that creator has slept with creature and hunter and has bedded the woman hunting him, the last thing any of them need is an awkward meeting in which all the gossip spills out. So it’s only natural that Victor and Brona – sorry, Lily – should receive an invite to just such an occasion: a ball hosted by Dorian Grey.

Dorian, once the curiously immortal Sir Bonk-a-lot of London, has had something of a more incidental role in this second season, as he starts to settle down with his new flame, Angelique. If he was once the catalyst to bring out Vanessa’s dark secret, though, Episode 6’s ball reveals him to be performing a similar function for everyone.

“We celebrate the unusual. We set the tune,” he tells his darling, ahead of her grand coming out. That determination to showcase and celebrate the subversive and bizarre draws those qualities out of the rest of our closeted monsters. But more than that, his ball feels like a plot device: the socialite exists, in part, to link the various narrative strands together. How else would Ethan Chandler and Victor Frankenstein happen to collide? Of their other mutual acquaintances, Vanessa is too busy running away from witches and Sir Malcolm is off rubbing his beard in Madame Kali’s private areas.

That meeting – of werewolf and reanimated former lover – is one of the juiciest prospects of this second season, as it would see Frankenstein’s hitherto unknown basement practices unmasked to the world. It’s surprising, then, that we don’t get that at all.

There are tantalising glimpses of “Mr. Clare” possibly being recognised as a walking corpse, though, as he gets to know his new friends at the local waxwork museum. Chandler, meanwhile, to visit their new exhibition – based, of course, on his own massacre from the end of Season 1. His repeated meetings with the detective from last week’s episode are only topped by the arrival of a victim from said massacre. Between the blackmail and the boys in blue, the message is clear: it’s not long now until Ethan’s furry alter-ego is exposed.

Josh Hartnett remains fantastic as the cautious gunslinger, all too aware of what he is and that people are on to him. Billie Piper and Harry Treadaway are equally on-form, one naive and excited, the other on-edge and glowering at anyone who goes near his precious woman. But even as Lily’s path crosses with the guests at Dorian’s ball, nothing much happens: we are simply left to admire the performances and pompous glamour on display.

Fortunately, there’s much to savour, from the gorgeous dresses and opulent decor to Helen McCrory’s menacing looks and the dialogue that drips with threats. Even Simon Russell Beale gets a chance to shine as the dolled-up Ferdinand – one that, naturally, he seizes with all the aplomb his orange hair can muster. “I so enjoy watching your scales catch the light as you coil,” he drawls, as he trades snipes with Kali. Their talking of age and trying to look young makes you wonder if there’s more to Lyle’s expert in ancient Egypt than meets the eye – at the very least, his hair colour certainly comes out of a bottle.

Kali, though, has more important concerns, as she continues her crafting of a new voodoo doll. “It is most important to own the flesh,” she says, half to herself. “Once you consume it, you have them.” It’s the kind of freaky thing that Penny Dreadful does very well: combined with its taste for vivid make-up and gory effects, you can’t help but be scared by her disturbing powers.

And yet, and yet… despite the wonderful fetish sequences, the beautiful visuals and sumptuous cast, the most surprising and dramatic thing that happens during “Glorious Horrors” is that Timothy Dalton shaves off his beard. It’s a tragic loss, one that reveals just how much control Kali now has over him (his reaction to his ex-wife’s death is really quite unsettling) but with no bigger twist than a disappearing moustache, you wonder whether expanding Season 2’s run to 10 episodes instead of eight is a good idea.

Season 1 of the show relied upon the surprise of not knowing what would happen next, as each familiar story intersected, and impacted upon, the others. By now, though, we already know the hidden horrors of each character. There’s a reason why Madame Kali’s scenes are the most shocking; apart from her unknown surprises, the suspense hangs upon watching these people discover the truth about their companions. If that opportunity arises, but ultimately proves to be a elaborate feint, you can’t help but feel a little underwhelmed. “Hold on tightly. It’s a complicated dance,” says Dorian, as he whisks Lily away with a grin. But the line between a drawn-out foxtrot and filler is a thin one.

– Bonus points to whoever created that bloody heart that now sits in the middle of Madame Kali’s doll of Sir Malcolm. It even appears to be beating and everything. Gross.

– Your ex-wife is dead. Do you: a. mourn her? Or b. Complain about the blood on your carpet? Honestly, Sir Malcolm. You tripping.

– Ethan Chandler seems remarkably unconcerned about his former victim turning up and threatening to expose him: is that just a ruse by a man who’s experienced in putting on a show?

– After many hours of attending things like plays and drinking in bars, Chandler’s decision not to attend the party marks a crucial step for him: rather than attempt to blend in with the humans around him, he’s now trying to lock himself away to protect them (and himself). Why? Because yes, it’s a full moon. And his transformation scene, watched over by Sembene, who chains Chandler to the basement wall, is a fantastic finale for the episode. It’s just a shame that it means nobody will recognise Lily for another few episodes.

– That said, does Dorian recognise her when they meet at the party? He is certainly taken with her, although that says more about his fascination with strange things than anything else. We’re beginning to suspect that his apparent love for Angelique is little more than passing infatuation with a novelty.

– The detective chasing Ethan definitely knows he had something to do with it. But will he ever put two and two together and come up with werewolf? Chandler’s chained up in the basement, but surely he has to break loose at some point for his story line to reach a climax?

– How do you make a ballroom scene with Eva Green and a heap of magnificent costumes even more beautiful? Simple: make it rain blood indoors. What a striking sequence it is, one that vividly brings to life that balance Penny Dreadful so ably strikes between the normal and the macabre. Naturally, Miss Ives imagines the whole thing – but you can’t help but wish that Hecate and the other witches stalking through the ballroom towards her might result in something a little more exciting than her merely fainting. We’ve over halfway through Season 2 now: it’s time to start getting those loose ends in position. 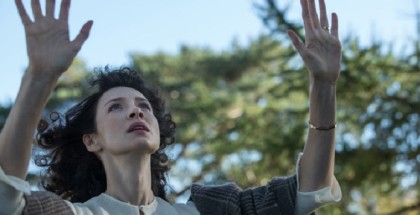