The Sinner Season 3 review: A disappointing return for Harry Ambrose 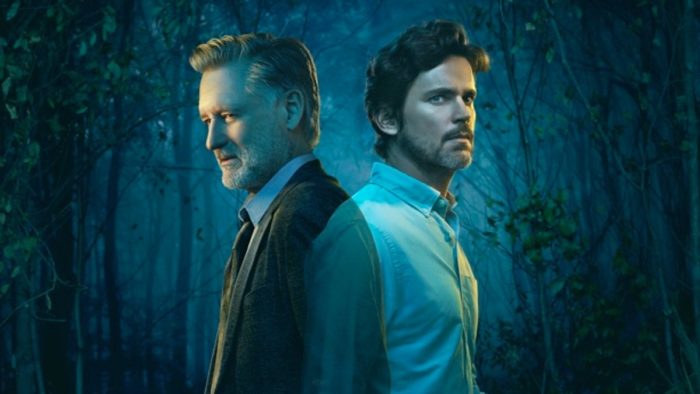 Pseudo-intellectual witerings and a ludicrous story makes this a disappointing return for The Sinner.

Warning: This contains spoilers for the initial set-up of The Sinner Season 3.

After proving a hit as a secondary character in Season 1 of The Sinner, making Bill Pullman’s dogged Detective Harry Ambrose the protagonist of Season 2 seemed a canny move – his twisty-turny investigation into a neo-pagan cult was a fantastic chiller. He returns again for Season 3, this time in his hometown of Dorchester, New York State, but the results are patchy at best.

It starts very strongly, as the midlife crisis of needy college lecturer Jamie (Matt Bomer) leads him to call his old university roommate – the sinister Nick (Chris Messina, excellent). Spouting Nietzschean philosophy with all the earnestness of an 18-year old who’s just watched Fight Club for the first time, Nick is clearly a Grade-A bell-end – but he seems to have some sort of hold over Jamie.

After Nick muscles his way into Jamie’s seemingly perfect life – he’s living in the suburbs with his beautiful wife, Leela (Parisa Fitz-Henley), just days away from giving birth – the two men go on a night-time drive that ends with the car totalled and Nick, not wearing a seatbelt (presumably that would be a sign of weakness) bleeding to death having been hurled through the windscreen. It was, everyone agrees, clearly an accident.

Enter the brilliant Detective Ambrose who, in the first of the show’s many cliched moments, is the only cop who smells a rat. It will come as no surprise – at all – that, by the end of Episode 1, Ambrose’s theory is proved correct: Jamie waited an hour before calling the ambulance, wiped his prints from Nick’s mobile before tossing it into the verge, and put on the car stereo. Yes, because Nick needed a cool soundtrack for his death.

Most of this is only awful in retrospect, as the first three episodes are superbly watchable. Knowing that Jamie, although guilty of manslaughter, is not yet a murderer, gives The Sinner Season 3 a unique spin – it’s up to Ambrose to prevent Jamie becoming the nihilistic killer Nick wanted him to be. Unfortunately, Episode 4 takes this intriguing premise and drives it off a cliff – or, to be exact, into Manhattan. Ambrose buddies up with Jamie as the young man goes bar-hopping and then ends up at a party where he meets a hipster psychic who – in just one example of the show’s many tone-shifting missteps – actually is psychic.

But this is a minor quibble compared to the drama’s fundamental flaw, namely that we’re expected to believe that grizzled no-nonsense cop Ambrose not only understands Jamie’s sophomoric pseudo-intellectual witterings, but buys into them too. What unfurls from Episode 4 onwards is an increasingly ludicrous series of events as the writers force Ambrose to take progressively out-of-character decisions. It reaches its nadir in Episode 6 and the only response from then on is to keep watching to see if there’s some sort of explanation – say, he’s suffering from a secret brain tumour – to explain his actions.

There is an excuse of sorts, but it is far from convincing. Cliché piles upon cliché as the narrative spirals down into a preposterous mess of pop psychology and undergraduate philosophical twaddle – all resulting in a dreary finale.

A disappointing third season, then, and one that does a major disservice to Bill Pullman’s eminently watchable Harry Ambrose. The same goes for the rest of the cast, who are all doing their best with the lacklustre material, particularly Fitz-Henley (best known to fans of Jessica Jones and Luke Cage as Reva Connors) and Breaking Bad’s Jessica Hecht as artist Sonya, although the hint that Nick has a connection with her is neither explored nor explained.

It’s worth a view as mindless fun – and, story aside, there’s a lot to enjoy – but if it’s a more plausible tale of a demented misuse of psychology and philosophy you’re after, then you’re better off with Netflix’s Unabomber. That show acknowledges that killers often spout a whole lot of guff to justify their actions, but that the cops tasked with capturing them are resolutely rational – just about. Season 3 of The Sinner, though, has taken poor old Harry – who faced down an entire cult last season – and reduced him to the sort of simpleton who’d probably share cat poster quotes on Facebook. If there is a Season 4, let’s all just pretend none of this ever happened.

The Sinner: Season 3 is available on Netflix UK, as part of an £8.99 monthly subscription.

Why Bob’s Burgers should be your next box set