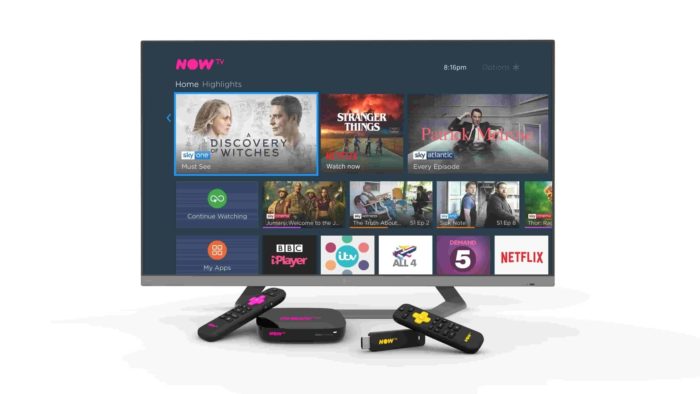 From Netflix and Amazon Prime Video to iTunes and Apple TV, the world is slowly going 4K, with Ultra HD visuals becoming more and more expected from film and TV fans. Nowhere is that more evident than in the streaming media device market, which has only become more heated, as Amazon’s Fire TV, Apple TV and Google’s Chromecast all have their own UHD models. Now, NOW TV has joined in, bringing its own affordable contender to the fray: enter the NOW TV Smart Box with 4K. Billed as the lowest priced 4K streaming device available, cam the low-budget underdog punch above its price bracket? We put it through its paces.

Essentially a branded Roku box, NOW TV Boxes and Streaming Sticks have always depended on Roku’s own hardware design to impress. This time, it’s impressively easy on the eye, with an unobtrusive curved square sporting a black case and eye-catching pink lettering on the top. The remote, too, is one of Roku’s best, with tactile controls, easy-access buttons, responsive clicks and a handily placed microphone for voice search (more on that later). Lightweight and sleek, it’s not the best looking device in your living room, but it certainly doesn’t look cheap.

NOW TV’s device has a whole host of apps, but its best feature is undoubtedly the price. Other devices that can output in 4K include Chromecast Ultra (£70), Fire TV with 4K (£50) and Apple TV 4K (£179). The NOW TV Smart Box costs £45.99, or for £49.99, you also get 1 month free Entertainment, Sky Cinema and Kids plus a Sky Sports Day Pass. More on what those mean shortly.

The NOW TV Box is painless to set up, plugging into your telly’s HDMI port (the value of the kit is boosted by the inclusion of a free cable) and asking you to sign in, or sign up for, a NOW TV account. The box automatically detects your TV settings to optimise its visual quality, all apps are swiftly updated in a couple of minutes, and the actual signing up or activation is done via a code on your PC or mobile, which saves time on trying type things in on-screen via the remote.

As NOW TV is essentially a Roku box, you can expect most of the usual apps from the major VOD platforms. That means YouTube and Sky Store (for renting/buying movies), but also every Freeview and PSB catch-up app: BBC iPlayer, ITV Hub, All 4 and My5 are all included, which makes the NOW TV Box an affordable way to get your TV connected with your catch-up service of choice. And, here’s the kicker, a deal between Sky and Netflix means that the NOW TV Box now has Netflix too, so there’s an all-in-one element of convenience that’s highly appealing.

The biggest selling point, though, is perhaps NOW TV itself, and the flagship app offers contract-free Sky to cater to two tastes: a Movies Pass gives you access to all of Sky Cinema’s on-demand library for £9.99 a month, while an Entertainment Pass gives you access to Sky TV’s main channels (including Sky Atlantic and FOX UK), which makes it ideal for those seeking a way to watch Game of Thrones legally and cheaply. That’s £7.99 a month. Both have free trials available new subscribers.

The only major thing missing? Amazon Prime Video, which means the NOW TV Box ranks one below the normal Roku Box and Amazon’s Fire TV devices – which means that you have decide whether it’s worth taking that hit in exchange for the lower price. Otherwise, the antenna that was on the previous NOW TV Smart Box has been removed, which means there’s no live viewing of Freeview TV available – although when you’re buying a streaming device, that’s not really top of your list of priorities.

With Roku powering your box, NOW TV’s menus are easy to understand navigate, quick to load and the remote control’s input is fast and responsive. The remote also works with compatible TVs to turn the overall set on and off and raise or lower the volume – one quick test of frequencies when you first use the remote and it’s taken care of.

The remote also includes a microphone for voice search, which puts the box on strong competitive footing with other devices – although the voice search, it should be noted, only works for NOW TV’s own content. If you’re searching for Game of Thrones or (at the time of writing) Black Panther, great. If you’re asking for BBC iPlayer, you’re going to be talking to yourself.

In terms of image quality, outputting up to 4K and 60fps is a huge step up from NOW TV’s previous, and other, devices. And, good news for your ears, the box can also handle DTS and Dolby Digital Plus 7.1 audio, which is impressive for such a low-priced piece of kit.

The only downside is that this tech depends entirely on the thing being streamed through it. Netflix, for example, can stream in 4K and looks great accordingly, with the NOW TV Box outputting up to 2160p (you may need override your box’s auto-configured settings, if your TV only supports 30fps). Catch-up apps such as BBC iPlayer, meanwhile, stream up to 1080p. NOW TV’s Sky content, however, is limited to 720p (and stereo audio), which means that you can’t get Game of Thrones in 4K through your Smart Box. The good news is that this isn’t a hardware problem: Sky has promises that NOW TV will be upgraded to 1080p soon, which means that your box will automatically start to stream the improved picture when that happens.

NOW TV’s Smart TV Box lives up to its claim as a low-priced 4K device, so if you’re looking to get your TV hooked up with all the Freeview apps plus Netflix, this is an excellent budget option. It works without problems, the remote is nice (direct buttons for TV Guide, My TV and Sky Store are included) and the design is unobtrusive enough to slot into your living room set-up.

NOW TV’s access to Sky content, meanwhile, offers excellent value. You just have to be patient enough for Sky to upgrade its visuals to get the most for your buck. 4K Sky content without Sky Q? That’s not going to happen anytime soon. But 4K Netflix and Full HD Sky without a contract? For those needing budget Ultra HD hardware, this is a compelling – and compellingly priced – contender.

The NOW TV Smart Box is available to purchase from www.nowtv.com/tv-smart-box

All 4 and E4 snap up Schooled and The Goldbergs