Short film review: Bricks, Lock In, Ghosted | VODzilla.co | Where to watch online in UK | How to stream 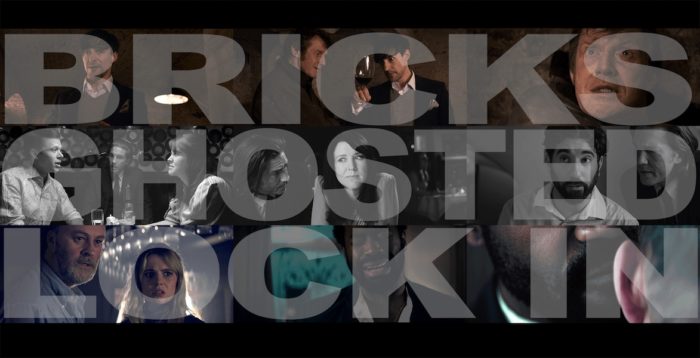 On Sundays, we review short films available online. We call it Short Film Sunday. This week, we catch up with a trio of new shorts from Neville Pierce, film journo veteran and scarily talented director, who premiered his triple-bill on Vimeo this week.

“It’s no use if the brick at the bottom wants to be the brick at the top.” That’s the ultimatum delivered by William (Blake Ritson) in Bricks. Of course, that’s exactly what what he would say, because he’s the brick at the top of the social wall: a stockbroker who hires a builder, Clive (Jason Flemyng), to help with the renovation of his wine cellar.

The pair are chalk and cheese, and both chalk and cheese know it: their dialogue, co-written by Neville Pierce and Jamie Russell, is full of spiky barbs and digs at each other’s relative standing; one taking pot-shots from below, the other delivering hammer blows from above. Blake Ritson is deliciously loathsome as the rich boy with no sense of decency, relishing the way that Clive mispronounces “Rioja” and waffling on about his own successes. Jason Flemyng, meanwhile, does superb work in a short space of time, using his own blue collar expertise to lord it over the manor-born toff, teaching him with a sneering disrespect how to correctly cement together bricks – a skill that the upper-class vulture will poach and exploit to his own ends. Based on Edgar Allan Poe’s The Cask of Amontillado, a story that sees a nobleman exact revenge, Bricks is a scathingly political update that reminds us how walls between people are built, and why they should be torn down.

Pierce finds endless angles to ping-pong between, as the tit-for-tat exchanges continue; this stands alongside Spielberg’s War of the Worlds in the two-hander-in-a-basement stakes. It’s all leading, of course, to a nasty climax, but Bricks confidently takes its time to get there, building the tension quietly, piece by piece.

Have you ever actually read the newspaper clippings you see on the walls of your local pub? You suspect that nobody has in The Common Inn, where Richard is the landlord. He’s a nice man, with a daughter, Lucy, who’s expecting a child of her own. He chats to her. He sings to her bump. He pulls pints. What’s not to love?

The answer, perhaps, comes in the form of Jimmy, a gangster who swaggers in just after closing time to order a pint of truth about Lucy’s old man. It’s a cracking set-up, one that again allows Pierce to make the most of an intimate, claustrophobic location; while Bricks jumps between two opponents with sprightly energy, Lock In lingers on close-ups of each character, as Jimmy’s reasons for visiting becomes clear.

That patient direction gives the cast a real chance to shine, and what a cast they are. Each one brings a gripping ambiguity to their turn, their faces shifting silently to reflect the new information we hear from the others in the room. Fortitude’s Nicholas Pinnick moves from intimidating to vulnerable, Sing Street’s tender and loyal Lucy Boynton grows shocked and confused, while Tim McInnerny is a long way from Blackadder with a magnificent performance that is moving, disturbing and sympathetic all at once.

Russell’s script and Pierce’s direction both share a keen attention to detail that makes every second of these 11 minutes count, finding unsettling suspense in a childhood nursery rhyme and unearthing telling clues in the paper proudly framed by its owner. You’ll never look at pub walls in the same way again.

Pierce and Russell reunite one more time for this superb slice of genre filmmaking. But if the idea of a horror movie might not sound that different from a duo who have made two psychological thrillers – praised by Scott Frank and David Fincher alike – Ghosted is a deceptively sweet and funny affair, one that fuses the supernatural with a warm dose of sentiment.

The film follows Rebecca (Alice Lowe), a widow who is looking for love after the death of her husband. Unsurprisingly, it’s not going well. Pierce tallies each brief encounter with a number on-screen, subtly reinforcing the sense of repetitive monotony that goes with the cycle of awkward dinner conversations. And the cast more than live up to that sense of countless tedium, from Ray Panthaki’s self-obsessed, phone-absorbed Paul to a dude who wants to try just staring at her for four minutes in case it suddenly makes them fall in love.

This ritual racks up a litany of male qualities that could do with being exorcised, so it’s only fitting that Rebecca should be accompanied through all of this by Nigel, her dead husband. Christien Anholt plays the spirit of her ex-spouse with a weary resignation to the fact that none of these suitors are good enough, a dead-eyed disdain that sparks with life when he manages to steal back her attention from the living.

Is he a possessive, clingy presence? A helpful guardian angel? A projection of Rebecca’s own feelings? Alice Lowe, whose remarkable Prevenge was one of 2017’s best films, allows it to be all three, as she interacts with Anholt’s observer as convincingly as she does with the men sitting opposite her in a restaurant – and their half-unseen conversations move between cute swearing to frustrated swiping away.

Shot in achingly beautiful black-and-white, there’s a warmth to this tale (led by Lowe’s open presence) that feels charmingly old-fashioned, and a nostalgic, wry wit to the way both Rebecca and Nigel struggle to let go; both are haunted by each other. A sweet meditation on the fear of moving on to the next life, while still holding on to baggage from the past, this is a gorgeously heartfelt gem.

With three versatile, distinct and smart shorts under their belt, Neville Pierce and Jamie Russell have announced themselves as accomplished, smart storytellers: whether their next project is separate or together, these are two talents worth watching out for.