Netflix UK TV review: House of Cards Season 4, Episode 1 (spoiler-free) | Where to watch online in UK | How to stream legally | When it is available on digital | VODzilla.co 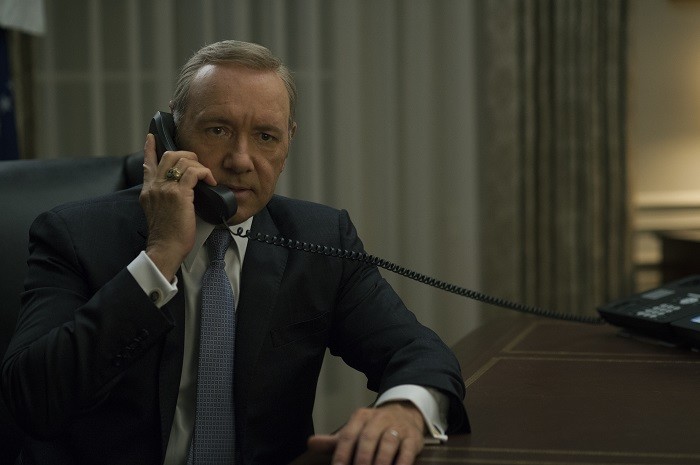 Fresh, tense and as gripping as ever.

Opening with a foreboding scene displaying the grey area between degradation and survival, the sombre tone and dim lighting may be trademark House of Cards fare, but the tension feels higher than ever in the fourth season of Netflix’s acclaimed political drama.

As the show proceeds, Frank’s oft-alluded metaphors that equate power with survival begin to enter reality in some very dangerous ways. It’s made abundantly clear that everyone in Season 4 is, in some way or another, fighting for their life. This creates some striking contrasts between the secondary characters and the incomparable Underwoods themselves. The difference becomes obvious: Francis and Claire Underwood treat every fight as a fight to the death and this one is no different.

After walking out in the final moments of Season 3, Claire does what many would and follows her broken heart home. Except Claire isn’t like most people – not least because she’s the First Lady – and the broken vows and PR hiccoughs take a firm back seat to the idea that Claire could be one of the most dangerous adversaries alive.

Nonetheless, back with a vengeance – or at least more of a vengeance than before – President Francis Underwood is still campaigning hard for his 2016 Presidential bid. Kevin Spacey himself, however, faces no such challenge; he embodies him so comfortably, it’s simple to imagine him drifting in and out of Underwood’s persona on set. Four seasons in and the actor makes the Southern Machiavelli effortlessly watchable and, dare we say it, likable.

Equally noticeable are the work of the wardrobe and lighting departments, which continue to set the mood long before a single threat is uttered; managing to make the brightest spaces and characters seem blurred and shady, House of Cards cements itself once more as one of the most visually rich shows currently in production.

Episode 1 of the new season establishes the changed landscape within half of its runtime and gets right down to business. Critically tense, the brilliance of Beau Willimon’s script lies in its ability to bear the weight of previous twists and then evolve accordingly, upping the ante as masterfully during a deceptive social call as it does during murderous threats. And so Season 4 of House of Cards welcomes viewers back with a crisp continuation from Season 3; the air is thick with struggles and never more than a few beats away from a stunning exchange of dialogue.

House of Cards: Season 4 is now on Netflix UK, as part of an £9.99 monthly subscription.

– Lucas Goodwin’s opening scene is harrowing and somewhat inspiring. We sees that he’s struggling, but he’s alive. And he’s surviving. And still fighting.

– A lady sits silently on the edge of a bed and she’s immediately recognisable from the demeanour and dress as Claire’s mother – so much so that her actual introduction almost isn’t needed at all.

– Claire’s return to Texas is reported by the press, somewhat accurately, as marriage problems, but the solution is unlike any other: The First Lady’s way of getting over her thirty year marriage? Abandon her husband and start plotting to run for Congress. Employing an equally ambitious campaign manager, she sets about thinking of ways to seize her own power, in every way.

– A lot has changed, although some things never do. Frank and Claire don’t mix personal and business and decide to explain away their supposed ‘marital dischord’ by revealing Claire’s mother’s terminal illness – which is also news to Claire herself. Ruthless, enraging and absolute, the pair prove that even when war looms, they’re scarier when they work together.

The Netflix effect: Sales of DVDs have more than halved in UK