Netflix UK TV Review: Riverdale Season 2, Episode 11 | Where to watch online in UK | How to stream legally | When it is available on digital | VODzilla.co

Warning: This contains spoilers for Episode 11 of Riverdale Season 2. Not seen Riverdale? Catch up with spoiler-free review of the first three episodes.

The mystery of the Black Hood is on the back burner for now, with most of Riverdale Season 2 Episode 11 (The Wrestler, guest directed by Gregg Araki) dominated by macho BS shenanigans between Hiram Lodge (Mark Consuelos) and Archie (KJ Apa). Mr. Lodge gives Archie the ‘You’re not good enough for my daughter!’ routine, but the lad stands up to Riverdale’s own Scarface (to quote Alice Cooper) and, in the end, the pair call a truce. Little does Hiram know he’s invited a snake into the fold, what with the high school jock and musician in cahoots with FBI Agent Adams (if he is a J. Edgar, because he hasn’t once yet flashed his badge and Archie can be a bit on gullible side).

Brilliant character actor Graham Greene appears this week, too, playing Toni Topaz’s grandpa Tom, the town’s oldest living Serpent and the backstory and history of Riverdale explores very prescient themes regarding white settler pioneers and genocide. Riverdale can be very dark at times, but this week it takes on mass extermination of First Nations people and how the town’s founder – General Pickens – was no hero or cool dude at all. It’s revealed that Pickens massacred the local tribe for the land and was financed by Barnabas Blossom. But Jughead makes things worse by getting his White Saviour Complex on in the student newspaper. He’s rightly shouted down for it. Not your fight, bro. Be an ally, sure, but you can’t lead the charge. The Serpents v Everybody Else in Riverdale now comes with a mighty twist: it isn’t just a case of class conflict at play, the wrong side of the tracks versus white picket fence types; there’s now a racial side to the battling and this opens things up to complex and emotional issues.

Riverdale also finally appears to be getting over initial teething issues to do with tone. For much of Season 1, there was a sense of a television show having a bit of an identity crisis. It veered too wildly between light and dark, comedic and shrill melodrama. Much of Season 2 has been very dark – serial murder, drug dealing – and the darkness suits it down the ground. Roberto Aguirre-Secasa’s background in horror ripples throughout Riverdale and yet it hasn’t resorted to introducing unambiguous supernatural elements, even when flirting with such things occasionally (mostly through its lush photography and gothic mood). Sabrina the Teenage Witch – a character from the Archie Comics universe and who lives in neighbouring Greendale – will be heading to our screens later in the year, but it hasn’t been established yet if there will be crossovers.

Hal Cooper (Lochlyn Munro), meanwhile, is having a hard time accepting Chic Cooper (Hart Denton) into the fold. His objections are interesting, because it feels like he’s doing more than rejecting a long-lost son: the guy’s acting like Chic isn’t his son at all. Alice (Mädchen Amick) is threatening to send Hal packing (not for the first time) and Chic has become his mother’s emotional crutch in the absence of Polly (Tiera Skovbye), who’s joined a cult. Man, the Coopers are one complicated clan!

While it’s been known for a while that Gregg Araki would be guest directing this week’s episode, there’s none of his sense of anarchic style and the whole thing is blandly helmed. Last episode, we got Twin Peaks alumni Tim Hunter, who made a lasting impression with his terrifying closing scene involving Chic standing over sleeping Betty, but Episode 11 might as well have been directed by Blandie McBlanderson, TV hack for hire. What a wasted opportunity.

Riverdale is available on Netflix UK, as part of an £9.99 monthly subscription. New episodes arrive every Thursday, within 24 hours of their US broadcast. 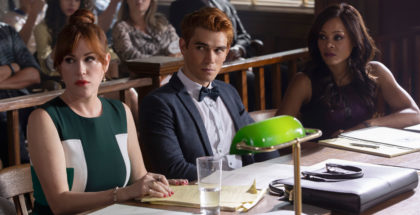