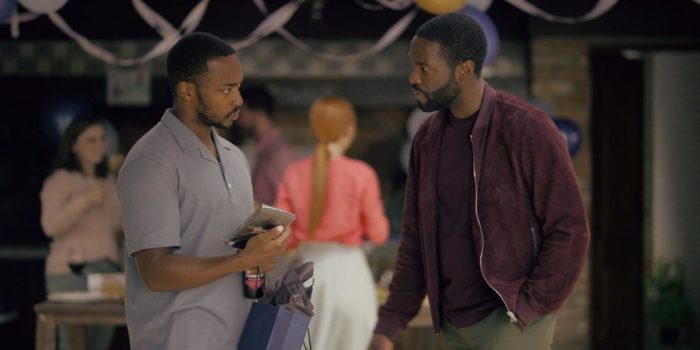 Polar bears. That’s the moment when Black Mirror Season 5 hits its peak – a revelation that’s shocking, darkly funny, moving, and only possible through the strange new world of modern technology. It occurs in the new season’s first (of three episodes), Striking Vipers, and, unfortunately, the other two never manage reach those heights again.

Vipers stars Anthony Mackie and Yahya Abdul-Mateen II as Danny and Karl, two old friends who hang out online, via a Mortal Kombat-esque VR game. When they discover that they can become any character, including a female fighter, their sessions open up an intriguing exploration of gender, sexuality, identity and perception. The episode blossoms into a thoughtful consideration of boundaries in relationships, the decreasing gap between the real world and the digital, and the line between spoken and unspoken feelings – something that hits particularly close to home in a friendship between two men, who are conditioned by society to project calm, cool and collected exteriors.

Anthony Mackie, in particular, is superb, as his recently married husband quietly sinks into unhappiness, while Abdul-Mateen II is brilliantly intense and passionate, their contrasting presences echoing the juxtaposition between the intimately shot VR sequences and the real-life blows traded between the men in a rainy street. The result is provocative, surprising and ultimately tender, balancing Black Mirror’s signature sinister wit with the kind of hear that made San Junipero such a wonderful outing.

But if Striking Vipers is Black Mirror near its best, Smithereens and Rachel, Jack, and Ashley Too are reminders of how much better Black Mirror can be. The former follows a taxi driver (Andrew Scott) who kidnaps an employee at a tech firm, demanding to speak to its boss. The ensuing two or three-man show has the same close-up quality of Vipers, but none of the depth, raising questions about social media addiction, the responsibility of network creators to safeguard users and the complicity of users in furthering their reach. Where Season 1 or 2 of Black Mirror might have delved into that with a caustic, scathing anger, Smithereens steers away from such extremes and plays it frustratingly vague and safe, never really going beyond the easy targets.

It’s a shame because Andrew Scott (who, in the space of a few short years, has become a household name for playing Sherlock’s criminal mastermind Moriarty or Fleabag’s “hot priest”) is heart-achingly sincere in his performance as man who has suffered from the worst consequences of our technological age. Topher Grace, as Smithereens’ CEO and founder (who is busy on a silent 10-day retreat in the desert when his employee is kidnapped), is equally good, but the script doesn’t decide whether to make him sympathetic or dangerous.

Rachel, Jack, and Ashley Too boasts a similarly excellent turn by Miley Cyrus as a pop star (Ashley O), who is tired of being controlled by a commercially minded guardian and treated as a commodity. Both themes are neatly encapsulated in the manufacture of Ashley Too dolls, tiny robots that imitate Ashley’s voice, thoughts and moves. One is purchased by a lonely superfan, Rachel (Angourie Rice), and things spiral from there into a compelling look at fame, freedom and self-belief. That look is an unexpectedly positive one, as the script adopts the tone of an early-90s sci-fi romp, but while there’s fun to be had in its climactic set piece – and the music by Cyrus is genuinely good – it’s slightly underwhelming for so many of the episode’s interesting questions to be left jumbled and unanswered in favour of something much broader.

That impression is hard to shake given that this shorter season follows the anthology’s innovative venture into interactive territory: Black Mirror’s Bandersnatch, which premiered last December, was a sharply woven journey into paranoia through the medium of a choose-your-ending game. Compared to that, this trio of outings feels inevitably less developed and less intricate. With stylish direction and a top-notch cast, Season 5 is still entertaining to watch, but its relative lack of adventurous storytelling leaves you wishing you could choose a different ending. Or add some more scenes featuring polar bears.

Black Mirror Season 5 is available on Netflix UK, as part of an £8.99 monthly subscription.