“Once you’re in, you’re in.” Those are the words that once again remind us that consequences are the beating heart of Better Call Saul – and, as they become increasingly clear for each character, how they react to them.

When we last saw Jimmy McGill, he was being picked up by Nacho and driven straight to Lalo. Lalo remembers Jimmy’s encounter with Tuco and decides to hire him to help with feeding the DEA information on Gus Fring. That, of course, is to help with Krazy 8, who got picked up last episode. Saul, as Jimmy has branded himself, tries to up the price – out of desperation rather than greed – only to find that Lalo is happy to pay his impromptu price inflation. And so it is that Saul is born officially out of one of Jimmy’s last acts of self-preservation – not only had his high-charging, fast-talking persona been established, but he’s also now known to the feds.

Enter Dean Norris, who swaggers back into the Vince Gilliganverse as Hank. Cocky, arrogant and loud, he immediately clocks Saul’s name as a fake, but Jimmy’s quick-thinking and Krazy 8’s willingness to play along still succeeds in making him an informant to the DEA. To Jimmy, that’s a job done and a client over with. But Lalo laughs it off. He’s the guu for this – he’s made for it. He’s in.

Also facing consequences of his actions is Nacho, who is visited by his dad. He tells Nacho of an offer that he has received to buy his shop and land – but before Nacho can enthusiastically encourage the idea, his dad smartly realises that Nacho is behind the plot, not as a sinister move but a compassionate attempt to push his father away and into safety. Like Hanks and Saul, Nacho’s dad sees through him, but Nacho’s father is proud and stubborn – and so, Nacho learns that not only is he to pay for the consequences of his actions, but his family will too. He’s in now, and it’s too late to back out – and we know that something bad is on the horizon. (Compare that with Mike’s grief for losing a son and you begin to appreciate the them of father-son conflict that underpins so much of Better Call Saul’s storytelling, and foreshadows the fall of family man Walter White – and his dynamic with Aaron Paul’s Jesse – in Breaking Bad.)

But Kim, as ever, is the richest character on screen, and Rhea Seehorn’s remarkable presence balances her awareness of the cost of her actions with a drive not to accept any of them. And so it is that she finds herself going head to head with Mr. Acker, a man who won’t accept a buy-out from Mesa Verde for his house and land, so they can build some kind of corporate monstrosity. Kim is allowed to do her pro bono work, which allows her to sleep at night, but when it comes to Mesa Verde, they know that they are her pay check – a consequence she has to accept having agreed to take their business in the first place. And so Kim, frustrated at this man’s refusal to take a fair offer, tries two approaches. First, she goes in hard and tough, but that only reinforces the old man’s perception of her as a corporate stooge. Second, she goes on quiet and friendly, opening up about her own poor upbringing and offering to pay herself to help him find a new home. Mr Acker, though, doesn’t give two hoots and refuses anyway – because no matter Kim tries to do, she can’t undo what she’s already done. Both her and Jimmy are at a stage where they have taken money to compromise their own instincts and are now defined by that decision. The tragedy of Better Call Saul, though, is that even the guy who refuses to compromise is going to lose in the anyway. When you’re in, you’re in, but being out’s not an option either.

Better Call Saul Season 1 to 5 are available on Netflix UK, as part of an £8.99 monthly subscription. New episodes arrive on Tuesdays, within 24 hours of their US broadcast.

Amazon brings back The Kids in the Hall

Ghibli on Netflix: The Tale of the Princess Kaguya 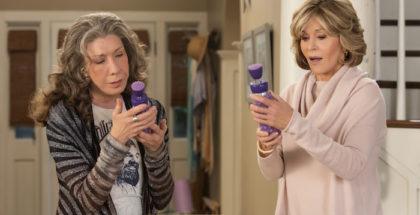