Netflix UK TV review: Better Call Saul Season 4, Episode 5 (spoilers) | Where to watch online in UK | How to stream legally | When it is available on digital | VODzilla.co 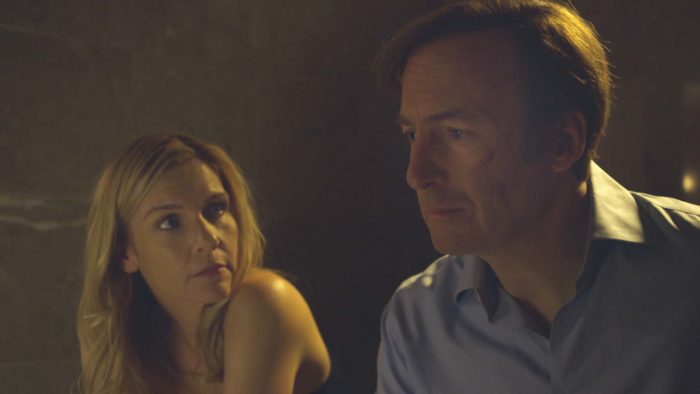 Better Call Saul gives us our first taste of Jimmy's future alter-ego as the road to Breaking Bad nears its end.

Ladies and gentlemen, Saul Goodman has entered the building. After 34 episodes of AMC’s Breaking Bad prequel, Episode 5 of Season 4 propels us into the path of its parent programme, right up to the brink of Saul fleeing the scene of his corrupt crimes to hide in a new identity. It’s the first time we’ve seen Jimmy’s future not in black-and-white anonymity but in garish multicolour: our first taste of this character in Breaking Bad mode, rather than in the aftermath of both TV series. “Tell ’em Jimmy sent you,” he instructs assistant Francesca (Tina Parker), as he advises her to get a lawyer.

Back in the present, a prescient Jimmy is already dwelling on the need for privacy, secrecy and undetected sins, as he builds upon his idea from last episode: to drum up sales in the mobile phone shop he’s holed up in, he doubles down on fear-mongering about The Man listening in on business and phone calls, and starts preying on any dodgy folk without 5 miles who might want disposable cellphones. He’s only a hair’s breadth away from his pay-as-you-go-friendly slogan, “Better Call Saul”, and a legal empire founded entirely upon the principle of clients needing the legal equivalent of a burner.

Gus and Mike, meanwhile, are paving the way for their own dark future, as Gus plans to build a gargantuan meth lab underground to cement his narcotics empire. And so Mike becomes the world’s most intimidating interviewer, as he welcomes engineers to the country and whisks them into the concrete space to get their verdict on the potential site. The first is thrown back almost immediately, to hilarious effect – Mike offering sympathy to anyone, whether they’re forced to wear a black hood or not, is laugh-and-loud funny – but the second gets the thumbs-up, after he descends into a thorough assessment of all the difficulties and obstacles that the project will raise. There’s nothing Gus likes more than caution and precision, both qualities that made Mike such an impressive figure for the chicken shop proprietor, and so he gets the gig to oversee the facility’s creation.

How long will construction take? You can expect several years, but the truth is that it’s irrelevant: it lasts as long as the gap between Better Call Saul and Breaking Bad, a gap that’s rapidly closing.

That’s highlighted by Kim, as she continues her quest to get out of the widening gulf on the Albuquerque horizon. Rhea Seehorn remains the MVP of the show’s fourth season, as Kim’s determination to do the right thing shines through the increasingly murky atmosphere. After being shocked by Mesa Verde’s plan to expand and become the kind of sprawling, sinister commercial force she doesn’t want to be involved with, she still spends her days in Judge Munsinger’s courtroom to help out those who need legal counsel. That doesn’t go undetected, as Paige (Cara Pifko) tries to call Kim, and she hangs up on her old friend. It’s less a case of tunnel vision and more a move to try and get herself fired – when Kim is called to see Paige and apologises, she seems surprised not to be dismissed, but instead just gets a warning and continued employment.

It’s a striking contrast to Gus and Mike, as they each actively try to steer their stories towards opposite ends of the moral spectrum. Jimmy, though, is caught in the middle. He dons his old Slipping’ Jimmy gear to chat to people on the streets and sell some pre-bought pay-as-you-go phones, but he’s far from modern or cool, and finds himself mugged by teenagers for his cash. It’s the kind of minor tragedy that has become a recognisable milestone on Jimmy’s journey towards becoming Saul. But our glimpse of Goodman in action with his own burner phone makes it clear that the journey is nearing its end. “Those days are over,” Kim reassures him, as she laments his injury at the hands of the young criminals. When he later shreds the phone number she gave him for a therapist, after a brief encounter with a broken Howard in a courtroom toilet (a reminder of what having a conscious does to you), it’s obvious those days are far from over: while Gus, Mike and Kim are all agents in transforming their lives, Jimmy and Saul are already the same person.

Better Call Saul Season 1 to 4 are available on Netflix UK, as part of an £9.99 monthly subscription. New episodes arrive on Tuesdays, within 24 hours of their US broadcast.