Netflix UK film review: When We First Met | Where to watch online in UK | How to stream legally | When it is available on digital | VODzilla.co

The trend for revisiting Groundhog Day eats itself in this misjudged rom-com.

Groundhog Day recently turned 25 years old. Harold Ramis’ modern classic, in which Bill Murray plays a weatherman who inexplicably relives the same day over and over again until he learns to be a better man, still stands up, and, in recent years, we’ve seen filmmakers try to emulate it in other genres. Edge Of Tomorrow was the action movie version, Happy Death Day was the slasher movie version and now, most redundantly, the Netflix Original movie When We First Met plays like another romantic comedy version.

Jazz club pianist Noah (Adam DeVine) is in love with his friend, Avery (Alexandra Daddario), and spends his days wallowing over being friend-zoned at the end of the magical night when they first met, three years prior. This comes to a head at her engagement party to the extraordinarily nice Ethan (Robbie Amell), when a drunken trip to the photo booth where they made a precious memory catapults Noah back in time to Halloween 2014, for one or two (or more) tries at stirring a romance between them.

Director Ari Sandel previously made The DUFF, a film starring Mae Whitman as a teen trying to grow out of the cruel high school label of “designated ugly fat friend”, so he has a history of turning around the sort of premise that sounds mean and wrong-headed. But lightning doesn’t strike twice here – When We First Met is exactly as misjudged as it sounds on paper, despite the best efforts of Sandel and an appealing young cast.

A lot of it lies squarely on executive producer, co-writer and star DeVine, whose screen presence as a kind of miniaturised Jack Black is stretched to breaking point. As a leading man, no amount of charming self-awareness can salvage Noah’s meandering, narcissistic path to the most obvious conclusion; in fact, acknowledging out loud how creepy it would be to use his knowledge of Avery to seduce her, and then doing it anyway, does nothing to endear us to him.

DeVine clowns his way through manfully, but he’s nothing like a three-dimensional character, and, similarly, while Amell (who was so good in The DUFF) and Daddario look great together, they’re mostly just changeable components of the film’s time travel shenanigans. The only real constant is Shelley Hennig, who exudes warmth even as the supposedly cynical roommate, Carrie, and although she’s going through the motions with everyone else, she’s effortlessly charming and deserves better than to be the Other Girl in this equation.

The one scene in which the cast comes together unfolds after Noah’s first disastrous attempt at changing history, in which he appears to be an obsessive stalker. Arriving back in 2017, he finds a timeline in which Avery, Carrie and Ethan only remember him from that night, and the resulting freakout is by far the funniest scene in the movie, particularly with Amell pressing his comic advantage as a super nice bloke who doesn’t really know how to fight. But, in terms of laughs, the film never reaches these modest heights again.

There’s already a great romance at the heart of Groundhog Day, and regrettably, When We First Met doesn’t find anything new in revisiting it. It quickly devolves into a series of mangled meet-cutes in which the audience and almost every other character in the film are ahead of the misguided lead, and it’s not nearly funny or likeable enough to support itself.

When We First Met is available on Netflix UK, as part of an £9.99 monthly subscription. 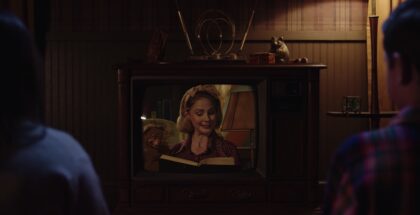