Netflix UK film review: The Cloverfield Paradox | Where to watch online in UK | How to stream legally | When it is available on digital | VODzilla.co 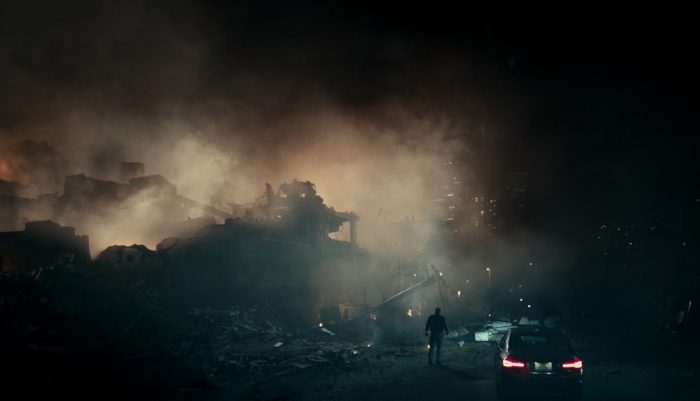 Netflix's cheeky Cloverfield release is sadly the weakest installment in the franchise so far.

“If you go, we’ll survive. I’m worried that if you stay, no one will.”

Blimey. There were rumblings that the beleaguered Paramount Pictures was planning to sell off the rights to the third instalment in the Cloverfield franchise to Netflix, but the surprise release of The Cloverfield Paradox worldwide after last night’s Super Bowl is a remarkable leap forward, even by the standards of this franchise’s viral marketing chutzpah.

A decade ago, the untitled teaser trailer for Cloverfield set film fandom alight when it appeared before Transformers in cinemas, and, in 2016, we were surprised again by 10 Cloverfield Lane being announced just six weeks before release. But the almost completely secretive campaign for the new film means that with a fourth instalment already in the can, we could be hours from a new Cloverfield movie at any given moment for the foreseeable future.

That element of surprise will certainly power the hype that greets all of these films, but sadly, unlike its predecessors, The Cloverfield Paradox can’t back it up. It has an ingenious premise: an origin story that also happens to be set in the future (the kind of time-bending twist that producer JJ Abrams loves). But more than 10 Cloverfield Lane, which was retro-fitted as a sequel from an original script, this feels like a middling genre movie with the franchise branding slapped onto it.

Taking place on the Cloverfield Space Station – the first overt reference to the title in one of these – we find a diverse crew of astronauts testing the dangerous Shephard particle accelerator in a bid to find an alternate energy source and stifle the rising international tensions on the planet below. An almost successful test plunges them into a unique, extra-dimensional crisis that endangers everyone on board.

The real triumph of The Cloverfield Paradox is its casting. The previous film’s three-hander with John Goodman, Mary Elizabeth Winstead and John Gallagher Jr was impressive, albeit only because they didn’t know they were going to be in a Cloverfield sequel, but this kind of film thrives on its ensemble. Here, Gugu Mbatha-Raw leads a blinding cast of character actors through a very nuts-and-bolts survival horror sci-fi, laden down with lumpy exposition and a bizarre lack of urgency.

Influences range from Event Horizon to Prometheus, but it’s the overall sensibility of the film that lets it down. Early on, there’s an almost John Carpenter-esque feel, especially in the introduction of one character who arrives in mysterious and horrific circumstances, and a darkly hilarious sight gag involving part of someone’s body. But given the way in which it was released, it’s disappointing that the movie’s element of surprise falters as it goes on. Most of the other big twists fall flat, as the script slogs on through all of the motions of its particular sub-genre, one at a time.

There’s some grisly and entertaining stuff and a committed cast of talents, but ultimately, the audacity of the film’s release strategy can’t disguise the reason why Paramount wanted to shop The Cloverfield Paradox elsewhere. It’s hard to imagine this sort-of prequel being as well received in cinemas as it will be at home, but the larger acceleration of the franchise’s viral marketing is a feat entirely separate from the quality of the film itself.

The Cloverfield Paradox is available on Netflix UK, as part of an £9.99 monthly subscription.