VOD film review: Rango | Where to watch online in UK | How to stream legally | When it is available on digital | VODzilla.co 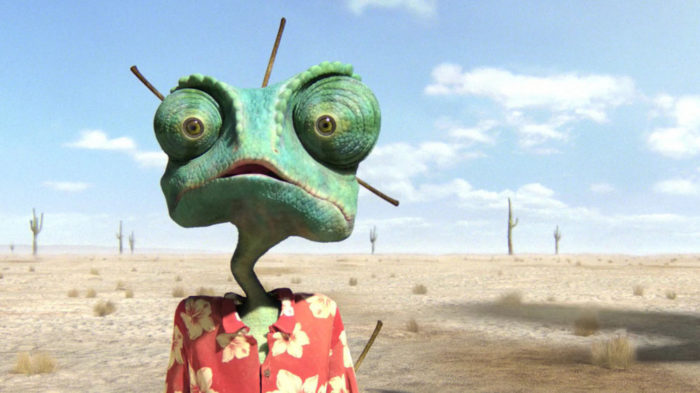 A fantastic addition to the existential Western canon, but not an animation guaranteed to please the whole family.

From the director of Pirates of the Caribbean: Curse of the Black Pearl and The Ring’s US remake, Rango is an animated oddity.

Johnny Depp, doing his best Hunter S Thompson, voices the titular chameleon who is thrown out of his cushy-but-dull tank into a story straight out of a Sergio Leone film. A bizarre conversation with a shamanistic armadillo about metaphorically crossing the road leads to the physical quest for water. Tripping across the desert through Dali-esque dreams, the lizard finds himself in Dirt, a one-horse town peopled by reptiles and small mammals (but no horse). A stranger, he adopts the tough-guy persona of Rango, constructed as a result of watching too many films. He is taken on as Sheriff by the mayor to tackle Dirt’s many ills. The bad news? There are many ills.

This is a bizarre take on the traditional spaghetti Western; its closest relatives are perhaps the early Westerns of Robert Rodriguez. Although pitched and marketed as a kids’ film, there is more here for discerning adults. The slapstick and mariachi owl band will entertain young viewers, but it’s doubtful they’ll make the connection with Chinatown or the other post-modern film references, let alone the appearance of The Spirit of the West (Timothy Olyphant doing Man with No Name) in a golf buggy.

The screenplay and characters are almost as bright and colourful as the film itself; you’ll admire every louse on each mangy critter. Coen Brothers regular Roger Deakins oversees the exceptional visuals, adding an extra layer of real to the CG. Hans Zimmer’s music matches it, with a distinct air of Ennio Morricone. The voice cast is great too.

The only thing the film suffers from is that it isn’t entirely sure who its target audience is: the Desperado-esque feel of the film is jarred by the child-friendly level of violence, but it may be a bit too out-there for the average seven-year-old. Having said that, kids may well benefit from an introduction to existential Westerns, and parents will be grateful of the departure from certain other family fare, or just a departure from logic altogether. An excellent existential Western, then. It’s just a shame there aren’t more wind-up fish.

Rango is available on Netflix UK, as part of an £9.99 monthly subscription.

Where can I buy or rent Rango online in the UK?