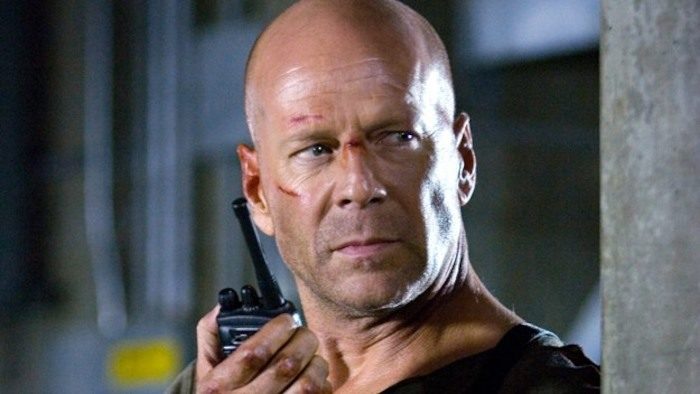 Cinema’s unluckiest man of the 80s returned in 2007 to save the day once again. As we join him in the modern age, John McClane is inevitably out of pace with America’s technological era. He isn’t even wearing a vest, the costume department opting instead for a more flattering grey t-shirt. But Bruce Willis’ hero is here to remind us that, in an automated world where terrorists use computers, you can still use a baseball bat to smash computers into little pieces. Or, if a baseball bat is unavailable, perhaps a car. Or a truck.

Len Wiseman packs in the explosions at the helm of Die Hard 4.0, an insane sequel that centres around Timothy Olyphant’s cyber-crook trying to shut down America’s entire infrastructure using his laptop. Taking McClane’s daughter hostage, he is desperate for revenge after an unfair dismissal from the FBI. Can you say malcontent? John McClane can’t, but that doesn’t matter. What he can do is save the life of hacker Matt Farrell (Long), using his geeky know-how to thwart the evil Olyphant. Once McClane gets the information he needs, New York’s finest cop ignores it, and follows his usual modus operandi anyway.

But disaster does strike before order is restored; a creepy Presidential broadcast that preempts the shutdown of financial, security and utility networks, begins to make the country look severely crippled. Sadly, no dread is conjured up by the entirely forgettable soundtrack, a shame after the themes of previous Die Hards. All the other departments, though, work at full capacity. One cheesy speech about the great old USA aside, the screenplay is tight enough to hop along quickly.

The disparity between the hairlines of the hero and his sidekick is soon forgotten due to their brilliantly timed banter. Without Alan Rickman, Ed Harris and Samuel L Jackson, the earlier entries in the series would have lagged significantly. Justin Long serves the same function here, shooting his trap off like Robert Downey Jr. He’s almost as funny too.

Towards the end, events become increasingly ridiculous. Credit to Brucie, though, for doing his own stunts; see the old man run and fight karate-chick Maggie Q; see him jump off fighter jets; see him gawp at the techno-babble spouted by Kevin Smith’s cameo as “Warlock, a digital Jedi”. Then, see him shoot more people before eventually shouting the inevitable line “Yippee-ki-yay motherf–”. You’ll be hard pressed not to join in.

Live Free or Die Hard is available on Netflix UK, as part of an £8.99 monthly subscription.

Where can I buy or rent Live Free or Die Hard online in the UK?

7 reasons why we are still watching Friends