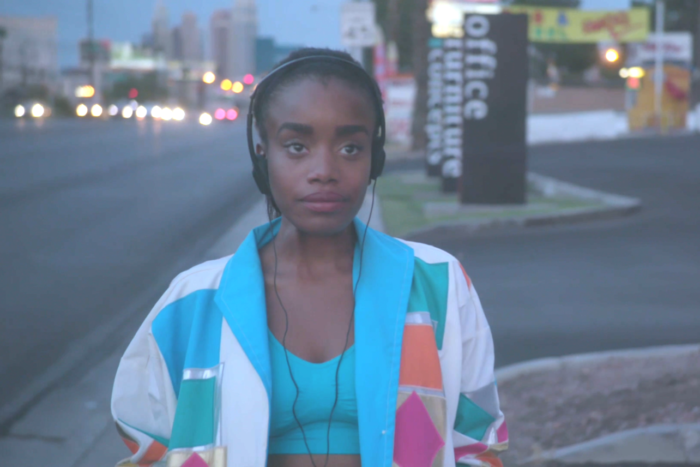 This underrated portrait of a cam girl opens up a raw, non-judgemental exploration of sisterhood, race relations and class.

The fact that Jezebel drew passive coverage from UK film reviewers when it premiered on Netflix raised no eyebrows of surprise. People will count the lines of women in Scorsese films or complain about Wes Anderson’s lack of people of colour in his casting, yet a sensitive low-budget movie from a female African-American can slip on to Netflix barely noticed and almost uncelebrated.

Jezebel is a difficult film, one that is layered and textured in a way that feels unique. The semi-autobiographical 1990s tale is set at the dawn of the internet era. Dial-up may be the only thing going, but already people are catching on to the possibilities. Tiffany (Tiffany Tenille), a teenage girl, lives with her three siblings (and sister’s boyfriend) in a cramped Vegas apartment. The only money coming in is through her older sisters’ job as a phone sex operator. When her mum dies after years of deteriorating health, Tiffany is trusted to provide a second income for the family. Her sister finds a solution: become an internet cam girl.

Jezebel doesn’t play out like more conventional movies of its ilk. There’s no easy, sweet-natured soundtrack to hug the emotions. The protagonists don’t get to have a moment in the sun with David Bowie’s Heroes blaring in the background. Even the apparent love interest in the film may not be as expected. In the running time of Jezebel, a young girl’s choice of working in the sex industry provides an exploration of sisterhood, race relations, and class as well as her sexuality. The film is unflinching in its depiction of the early cam girl world, but not in the way you expect. It leans into the sex industry with a candour that is kinder than expected. The detail shown is clear and well observed. But the film also sees the people providing sex work not as objects but as people, and in a way that even becomes lost on some progressive types – whether or not they would like to admit this is a matter not for a film review.

The film’s difficulty comes from the fact that Numa Perrier is not at all bothered in wanting to spoon-feed answers or provide judgement calls. She has lived this life and is providing her truth. The film’s voyeuristic cinematography is so matter-of-fact that the scene becomes a mirror. There have been similar cam girl sequences in films such as King Kelly (2012) or Cam (2018), but as both examples were aiming for different things, neither share the same kind of stark feeling of intrusion. One IMDB user review claimed that the film was nothing more than soft-core pornography. While a bizarre critique, as that would be to state that the film is in some way titillating, it does, in turn, highlight the issue about films that depict sex work as well as the industry itself. If one is looking at a film like Jezebel and only clocks that the film features women being suggestive on camera, then, in turn, it may highlight the kind of socio-political invisibility that cloaks its main characters, who are struggling to make rent or inhabiting the type of micro-aggressions and racism witnessed which wouldn’t look too different in a more “reputable” open office business.

The film is also sensitive about its emotional conflicts. Perrier opens us up to scenes and sequences that suggest possible outcomes or complicated feelings. The small exchanges between Tiff’s sister, Sabrina (Numa Perrier), and her boyfriend, David (Bobby Field), are revealing not only in how the couple met, but also in how they highlight a cyclical element between the sisters themselves. A deeper relationship with one of Tiff’s patrons could easily drive the film towards certain avenues, yet Jezebel refrains from the explicit and leaves things to the imagination. There are times when we look across at Sabrina’s face at certain moments of the film and you can see her face navigating a maze of complex feelings – she cares for her siblings, but is also aware of the world that she’s pushed her to pass through. Are we to fret for Tiff’s well-being? Is what is being said to her genuine? Is it wise? The fascination of Jezebel is that, whether it’s the sex work itself or the sisters who pass through it, the film observes rather than passes judgement.

A tongue was clearly planted in this writer’s cheek when writing this review’s opening paragraph, but only so far. There so often seems to be a blind spot when talking about films that don’t have a bankable PR system behind them. It’s noticeable when varied features made by women and minorities are released on easily accessible platforms such as Netflix, yet the discourse stops short of them. There are emotions in Jezebel which are as raw as its unpolished film-making, but by being unburdened of the gloss in which many movies are made, it gives the film a freedom and involvement many others try for.

Jezebel is available on Netflix UK, as part of an £8.99 monthly subscription.