Netflix UK film review: Insidious | Where to watch online in UK | How to stream legally | When it is available on digital | VODzilla.co

Insidious will make you howl with laughter as much as fear. Either way, it's a hoot.

Insidious (adj.) – proceeding in a gradual, subtle way, but with harmful effects.

That’s what Saw creator James Wan is presumably aiming for with this haunted house/possessed baby horror flick. It’s not that subtle, but it’s nowhere near as harmful as any of the Saw sequels. There’s no gory torture rubbish, for starters: just two parents, a defenceless kid, some evil spirits and a woman in a gas mask.

Josh (Wilson) and Renai (Byrne) are a lovely couple who look a lot like Patrick Wilson and Rose Byrne. But things go wrong when they move house (surprisingly) and their poor little son Dalton gets all possessed and winds up in a coma.

And so begins 103 minutes of people walking round houses slowly, stopping at every creaky floorboard, half-open door, crackling baby monitor and any other horror cliche that happens to be haunting their home. We’ve seen it all before, but the decidedly old-school approach to the effects makes it pretty terrifying. Until Mrs. Gas Mask comes along.

Played by Lin Shaye, Madame du Gas Mask is a medium with her own crack team of ghostbusters (one of them played brilliantly by writer Leigh Whannel). Scouring the house with home-made gadgets, they’re a geniunely funny interlude to the straight-faced shocks of the rest of the film.

But as things become more far-fetched, it’s harder and harder to take them seriously. Partly because the head demon looks a lot like Darth Maul, or The League of Gentlemen’s Papa Lazarou with red make-up on. And partly because the woman’s wearing a gas mask.

In between Patrick Wilson’s eyebrows and Rose Byrne’s worried face, Insidious finds enough to keep you on the edge of your seat. Encounters in corridors are creepy enough to offset the laugh-out-loud moments when Darth Maul pops up at the dinner table – just don’t go in expecting a plot that makes sense. By the time the supremely daft climax rolls around, the level of fear boils down to whether you find face paint scary or not. If you do, you’ll love Insidious. If you don’t, you’ll like it anyway.

Insidious is available on Netflix UK, as part of an £9.99 monthly subscription.

Where can I buy or rent Insidious online in the UK? 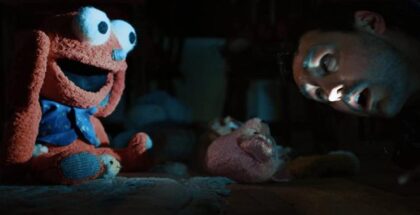