Netflix UK film review: In the Tall Grass | VODzilla.co | Where to watch online in UK

Adaptations of Stephen King feel as if they’re ten-a-penny these days but after the success of It: Chapter One 2 years ago, this should come as no surprise. The sheer variety of horrors he has presented will likely never be matched by another author cinematically and the mix of filmmakers who have taken on his material is rather mind-blowing. The latest up to bat is Vincenzo Natali, a filmmaker who could not make a boring film if he tried. He’s had ups and downs, but the man behind Cube and Splice taking on material written by King (and his son, Joe Hill) is something those predisposed to genre fare are sure to be excited by.

“Ups and downs” is probably the most succinct way of describing In The Tall Grass. The film seeks to be mysterious, other-worldly and creepy, but increasingly does itself a disservice in various ways. A key example is Patrick Wilson, an actor who usually matches the tonality of his material perfectly (look at the balancing act he does in Insidious: Chapter Two) but here feels lost at sea as a generic nice guy dad who turns into the worshipper of an occult deity, who behaves as if he watched a local preacher and decided what they needed was a lovely bit of honey-glazed ham sprinkled over their histrionics. Natali doesn’t do him any favours and it certainly isn’t Wilson’s fault: the creepy malevolence he shows in his earlier scenes is played very well, but unfortunately ebbs away.

As for the evil force at work in the story, it’s an odd idea in keeping with classic King, but its very nature means things around it have to be artificially dialled up. Natali’s certainly got some compelling visuals up his sleeve – a shot of what seems to be tall grass waving around late on brings a chill up the spine – but there’s also very standard-issue body horror and cult members doing exactly what the most derivative cult members do. The film is never boring in the moment, but it does leave an underwhelming aftertaste.

The strongest material is early on. The initial confusion over being lost in the grass, as time and space are played with, brings a sense of encroaching terror – the well-handed, mysterious threat is helped by the fact that tall grass in itself feels like something that shouldn’t. A less showy second half could have resulted in a quieter, more effective piece of work.

In the end, this feels like a fairly conventional Netflix horror film. In The Tall Grass is by no means awful – the first half stops it from ever approaching that kind of territory – but the fact the second half feels silly when it’s obviously not supposed to is a failing. Don’t expect to remember much after the end credits – apart from Patrick Wilson’s moustache.

In the Tall Grass is available on Netflix UK, as part of an £8.99 monthly subscription. 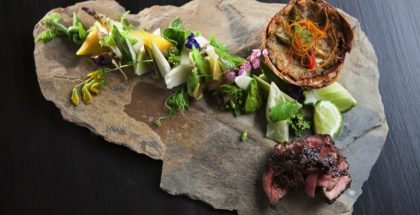