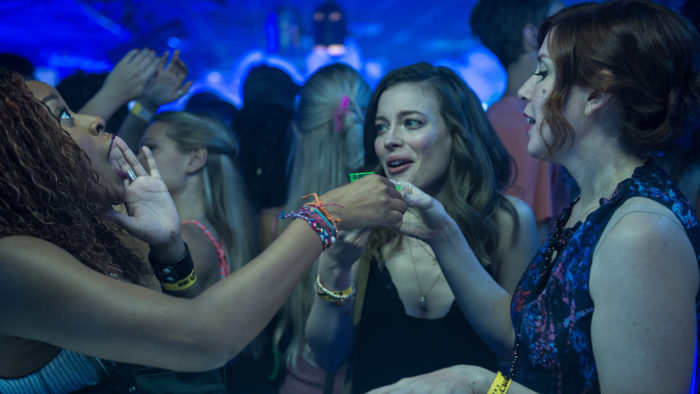 A weightless plot and lack of laughs turn Netflix’s trip to Ibiza into a dull night in.

Ibiza is never any more than the sum of its parts. Netflix’s new original movie aims for light, but if it were any lighter, it would blow away in the wind. It’s a comedy so it doesn’t need to be heavy, but it could do with something to give it a bit of heft. An element to make it less forgettable than it is.

The film starts well enough, quickly establishing the character of Harper (Community’s Gillian Jacobs) as a lost 30-something, stuck in a naff, thankless PR role. Frequently lambasted by her horrible boss (delectably played by Michaela Watkins), Harper is given the chance to do something interesting with her job by heading up a project in Barcelona with some foreign investors. This gives a perfect chance for her dubious friends (Vanessa Bayer, Phoebe Robinson) to hitch a free trip with her for a brief, sun-kissed bowlful of shenanigans. No sooner than they reach their destination, Harper falls for awkward Brit DJ, Leo (Game of Thrones’ Richard Madden). The antics continue as Leo invites Harper to Ibiza for a gig. The film is so weightless that to say anything more would kill what little of the plot is left.

Director Alex Richanbach and screenwriter Lauryn Kahn are perhaps wise not to overfill their film with a needless narrative. The best comedies usually carry little in the way of complex story, but Ibiza’s functional direction and fluffy script lacks the kind of set pieces or characterisation that made the likes of Girls Night (2017) such a romp. It’s not that the cast isn’t capable. The three leads have more than enough chemistry to be engaging, and the film captures that westerners aboard feel with a determinable earnest.

However, one feels in this brave new world of progression, the film has everyone involved sitting on their hands. The cringe-worthy awkwardness of ‪The Inbetweeners Movie‬ (2011) isn’t for everyone, but that’s the very reason why the film works. It goes hell for leather for what it’s good at. Ibiza as a resort is well known for its debauchery, and while the film doesn’t need wild gross-out, there’s very little in Ibiza that feels very crazy, let alone laugh-out-loud funny. There’s an underlying feeling that the film doesn’t want to alienate anyone who may be watching – a reminder of the fine balance between comedy and so-called offence.

The film delivers some titters in the beginning, but this could do much more with a screenplay that had more legs and a director who was willing to get the cinematographer and editor to push the boat out, in terms of style and energy. Ibiza could have delivered more than it promises, but it looks like yet another unfortunate Netflix misfire that will sit snuggly along the ranks of Game Over, Man! (2018) and Take the Ten (2017). C’est La Vie.

Ibiza is available on Netflix UK, as part of an £8.99 monthly subscription. 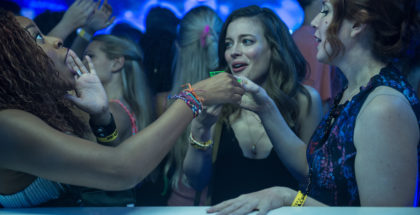